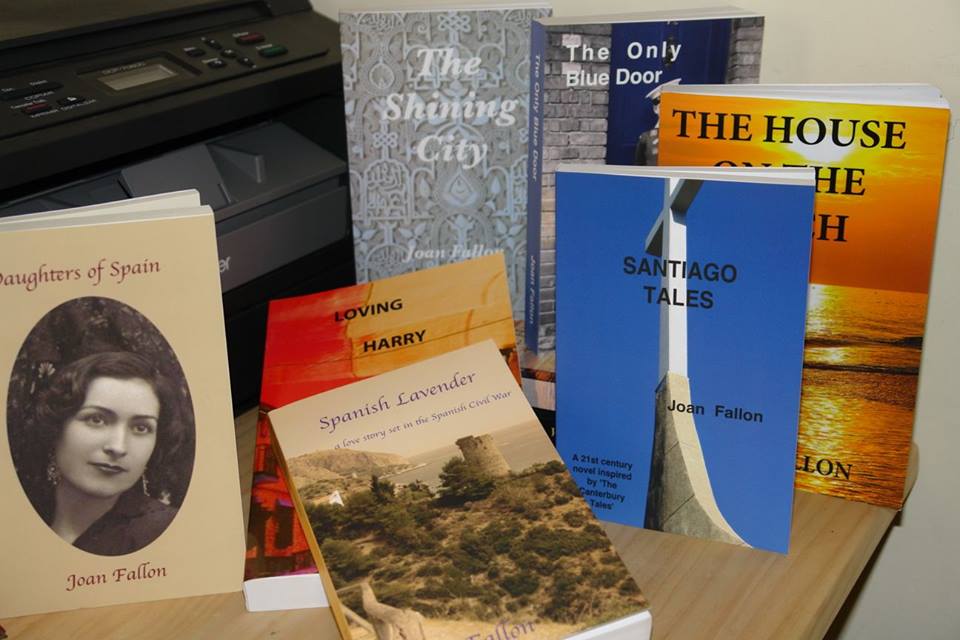 Today I have author Joan Fallon with me. If you are a fan of historical fiction, then you will definitely enjoy reading her books. Check out our exclusive interview with the author where we get to know her better and talk about the spanish influences in her work!

I was born in Scotland and lived most of my life in the south of England. I used to be a teacher and later moved into management training. At the start of the new millennium, I moved to Spain with my husband and started a new career as a writer. I used to be a very keen golfer, but now don’t find the time to play very often. I read a lot and I have two dogs that require a lot of attention.

From what I know, you published your first novel back in 2011. Did you use to write before that but never published anything? Even before ‘Daughters of Spain‘ in 2009?

Yes, I used to write a little but didn’t have the confidence to try to get it published. Then, in 2006, I took a Creative Writing course with the Open University. This changed my attitude towards writing and I began to have more confidence in my own ability. My first book, “Daughters of Spain“, was published by Pegasus in 2009. It wasn’t until 2012 that I began to self-publish.  This was a positive step for me because then I was in control of the whole process, content, cover, layout and marketing. I enjoy all the stages, except perhaps the marketing, which takes a great deal of time which I would prefer to use for writing something new.

Many of your books are set in historical periods. I know for a fact, writing books that are influenced by historical events need a lot of research. What made you decide to write such stories?

I took my degree in History and it has always been a keen interest of mine, especially social history. I never set out thinking I will write a historical novel, I just find a subject that interests me and sometimes it is set in the past. But you are quite right, writing historical novels takes a lot of time because of the amount of research that is necessary. When I wrote “The Shining City“, which is set in 10th century Spain at the time of the Moors, I knew nothing about the period and had to spend the first six months researching it. But that was very enjoyable and now I feel I could write a sequel to “The Shining City” sometime.

What can you tell us about your latest book “The Only Blue Door”?

“The Only Blue Door” is a good example of what I just said; I was interested in the subject first and the time period, World War II, just followed on. I had read an article in a newspaper about the children who had been sent to Australia as child migrants, during the war and afterwards; now grown men and women, many of them were trying to find their original families. It was heartbreaking to read.

So I decided to write a novel about three young children who, through a chain of circumstances, find themselves alone in the east end of London. They are wrongly identified as orphans whose parents have been killed in the Blitz and sent as sea evacuees to Australia. It is the story of their struggle to survive in a strange country, far from friends and family, and of the eldest child’s efforts to reunite them with their mother. It is a sad story, but it is also the story of courage and determination.

This might be hard to answer but what’s your favorite book from the ones you wrote?

Each one is my favorite while I am writing it, but I think “The Only Blue Door” is the one I like best because it is a very emotional story and it is made more so by the fact that it is based on actual events.

Do you have any advice for indie-writers who have just started?

Yes, make sure you have an editor before you publish your book. I have had all my books professionally edited and it was well worth the expense. As a writer, you become so involved in the details of your story that you stop seeing it from the reader’s perspective. A good editor will ask you questions about your book and make you look at it afresh. Once you have done that, make sure that you have a good proof reader to go through it for you. It’s amazing that no matter how many times you go through your manuscript, typos and spelling errors will creep in and you are unable to see them. Don’t kid yourself that the computer can do it for you; it can’t.

You can to know more about Joan Fallon and her books by visiting her website.

Have you read any books by Joan Fallon? Let us know!