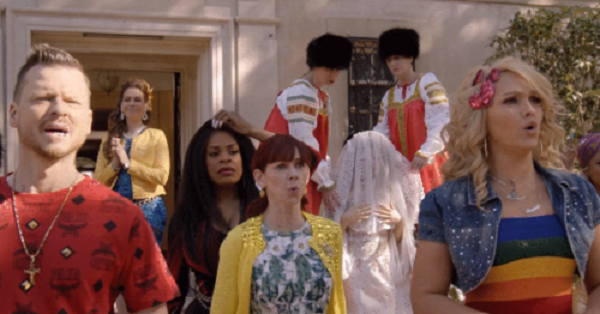 Desna and her girls are back in Claws season 2, and I can’t wait to see the events they will experience. A lot happened in ‘Shook’ and I loved every second of it!

I was provided a screener of ‘Shook’ for review. The opinions are my own.

We left Desna (Niecy Nash) and her crew working for the Russians back in season 1. A few months have passed, and the second season picks up with Desna trying to get the Hussers to fall in line during ‘Shook’. I really enjoyed the opening scene, which showed all three Husser men being whiny babies. It is clear they don’t want to work for anyone unless they are the ones running things. Their attitude also makes sense considering they are already in cahoots with Gregory Ruval, Desna’s boyfriend who (still unknown to her) is also a Haitian mob boss.

Reva came in with dangerous plans, and it was clear Desna couldn’t do what the Russian leader wanted, especially with the Hussers not supporting her. I have to say I was worried about Desna and her crew more than a few times during ‘Shook.’ Reva is definitely the kind of character who will kidnap and torture someone close to Desna to get her to do stuff. But in the most surprising of turns, the writers of Claws didn’t wait long to take Reva off the board. I was not expecting them to make such a move, and the fact the writers just did is the reason I enjoy this show so much!

Introducing Franka Potente as Zlata Ostrovsky brought an exciting new energy to the premiere. Zlata is someone who thinks logically but has a crazy personality. She immediately felt a bond with Desna due to both women understanding the importance of family. Zlata sees potential in Desna, and you know she is going to use Desna’s family (which includes her brother Dean and her crew) to blackmail her down the line. Sigh! Desna just can’t catch a break.

You should all consider watching Claws on TNT because it has an interesting premise, a very diverse female-led cast, and unashamed queer representation.

Did you watch the premiere of Claws season 2? What did you think of ‘Shook’? Let us know.