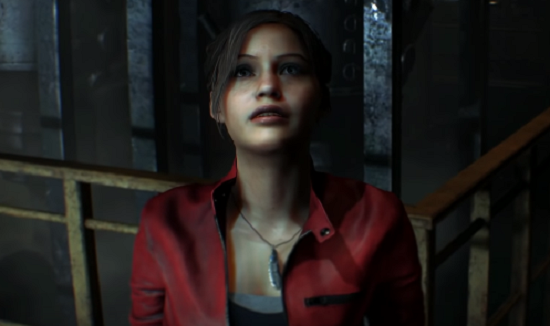 Sony finally gave Resident Evil fans what they have been waiting for! During the E3 2018 press conference, Sony unveiled two trailers for the Resident Evil 2 remake. The trailers showcase a highly detailed environment, some shots of gameplay, and a very young-looking (zombie inexperienced) Leon and Claire. I can’t wait to play this remake next January!

The first Resident Evil 2 remake trailer begins with the POV of a rat, similar to the Outbreak series. We see a sheriff being attacked by a zombie and then Leon S. Kennedy comes in to shoot the undead. While Leon does look different, at least he doesn’t look Chris-level different. In the trailer he looks young, which makes sense considering he is still a rookie during the events of R.E. 2.

The trailer also features Claire’s new appearance. She too looks very youthful and her iconic biker outfit seems to have gone through a few changes. Comparing the babyface models for both Claire and Leon is an amazing way to show everyone how a single horrific night in Raccoon City changed them drastically as they continued to face zombies in their life. The trailer has a shot of Ada Wong, too.

There’s also speculation that Claire Redfield might be of Native American descent going by what the original script for R.E. 1 said about her brother Chris. I am down for more diversity in this franchise if that is the case!

As far as the gameplay is concerned, Capcom has confirmed a third-person, over-the-shoulder perspective. You can watch a bit of the gameplay in the second trailer.

In a press release, Capcom said the “game has been completely rebuilt from the ground up for a deeper narrative experience. Using Capcom’s proprietary RE Engine, Resident Evil 2 offers a fresh take on the classic survival horror saga with breathtakingly realistic visuals, heart-poundingly immersive audio, a new over-the-shoulder camera, and modernized controls on top of gameplay modes from the original game.”

The company even went on to boast about the “new photorealistic style” that the engine makes possible. “Characters themselves appear sharper than ever and the grotesque hordes of zombies are brought to life with a horrifyingly realistic wet gore effect.” Also, “Zombies now react in real time as they take instant visible damage, making every bullet from the player count. Stunning lighting brings the familiar rooms and corridors of Raccoon City Police Department to new life. Players will feel they’re in the shoes of heroes Leon and Claire, terrified to step out of the light for fear of what flesh-eating nightmares might await them in the darkness.”

We are sure to get more information as the game nears its release date. Resident Evil 2 remake is currently available for pre-order. Releasing on January 25, 2019, it will be available for PC, PS4, and the Xbox One.

Previous:Claws 2×1 Review: Shook
Next: The Full ‘Hit The Floor’ Season 4 Trailer Is Queer As Heck!