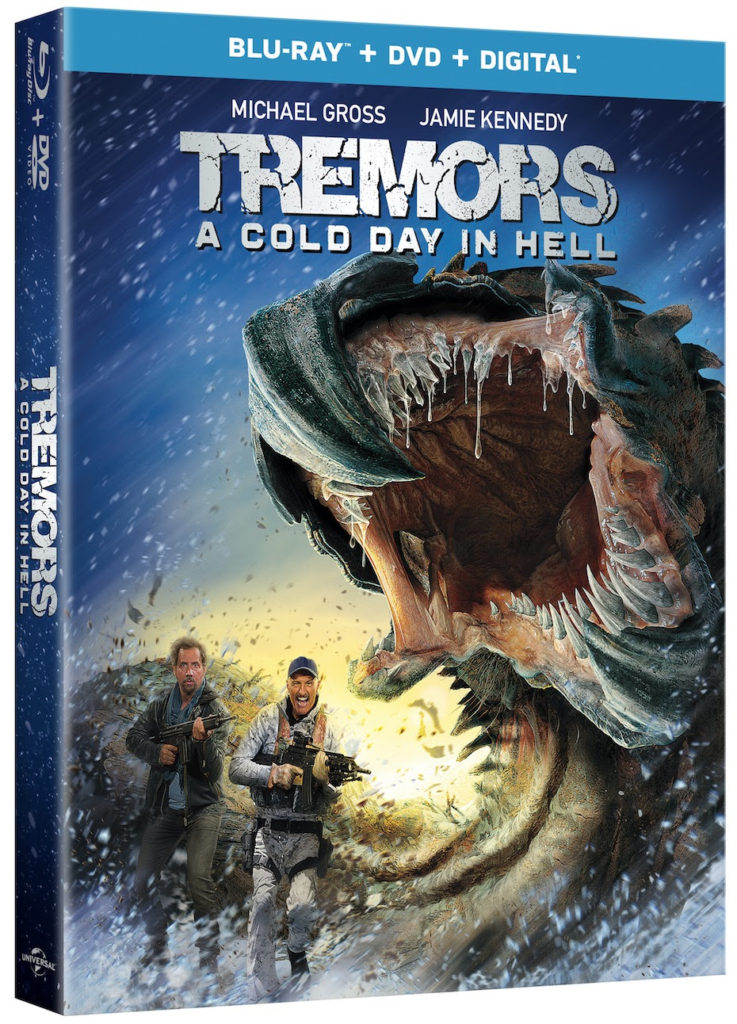 Fans of the Tremors franchise should mark their calendars. The newest (and sixth) installment, Tremors: A Cold Day in Hell, will be making its way to Blu-ray Combo Pack, DVD, Digital and On Demand on May 1, 2018, from Universal 1440 Entertainment, Universal Pictures Home Entertainment’s original content production arm.

The Tremors‘ franchise’s mainstay (and quite possibly a pop culture icon by now) Burt Gummer, played by Michael Gross, will return in Tremors: A Cold Day in Hell. Jamie Kennedy will play Burt’s son Travis Welker. The upcoming film will combine horror and humor while offering more “screwball antics and action-packed thrills than ever before.”

Fans can also expect a lot of fun exclusive bonus features, including behind-the-scenes footage, a closer look at the very first underwater Graboid attack, and even commentary from the filmmakers.

Burt Gummer (Gross) and his son Travis Welker (Kennedy) find themselves up to their ears in Graboids and Ass-Blasters when they head to Canada to investigate a series of deadly giant worm attacks. Arriving at a remote research facility in the arctic tundra, Burt begins to suspect that Graboids are secretly being weaponized, but before he can prove his theory, he is sidelined by Graboid venom. With just 48 hours to live, the only hope is to create an antidote from fresh venom — but to do that, someone will have to figure out how to milk a Graboid!

Furthermore, new and longtime fans can rewatch the entire franchise when Tremors: The Complete Collection becomes available on DVD on May 1, 2018. The set includes Tremors, Tremors 2: Aftershocks, Tremors 3: Back to Perfection, Tremors: The Legend Begins, Tremors 5: Bloodlines, and Tremors: A Cold Day in Hell.

I wonder if the Kevin Bacon-starring TV series will ever happen. Anyway, check out the film’s trailer!

The Blu-ray, DVD, and Digital Exclusive Features Include:

Are you a Tremors fan? Are you looking forward to Tremors: A Cold Day in Hell? Let us know.