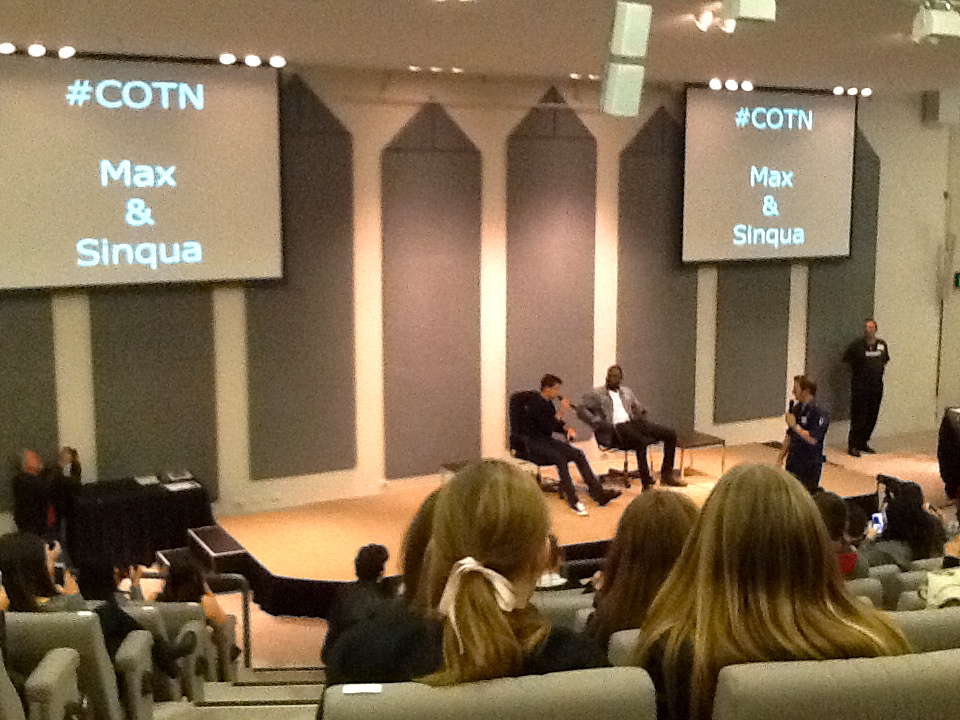 When two men that are this attractive take the stage, it’s hard to focus. Somehow I managed to control my hormones long enough to get the gist of what went down at the Max Carver (Aiden) and Sinqua Walls (Boyd) panel at Creatures of the Night in Sydney on Sunday. It was not easy because these boys are not only MORE attractive in real life, but they’re also very intelligent and super fun to listen to. They talked about their time on the Teen Wolf set (shockingly, they loved it), celebrity crushes (Sinqua wants us to be his matchmaker) and what it was like to die (Max is really into it).

First things first: they love Australia. Of course they do. I know I’m biased because I live here but it’s a pretty cool place (most of the time anyway). Max was, as most foreigners tend to be, very concerned about Vegemite: “I don’t know what you guys do with Vegemite… it was about to be an interesting breakfast… Vegemite, in terms on the content, is just a wonderful thing. Yeast extract, whoever thought of it was just  really put their best foot forward… I won’t say how I described Vegemite this morning, you’re all a little too young for that.” It all went according to plan really, watching people get upset by Vegemite is a national pastime (it’s always funny).

Max broke his foot playing soccer so he was on crutches for the event, poor guy. He did think about sending his brother Charlie in his place to see if anyone would figure it out but he realized he might get in trouble for that. The best part was that his toes were exposed by his cast, revealing his beautifully painted nails. He passed out because of his pain medication and when he woke up, Holland Roden (Lydia) had painted his toe nails. Sinqua was really happy someone asked about that: “I wanted to know the same thing and I just didn’t ask.” 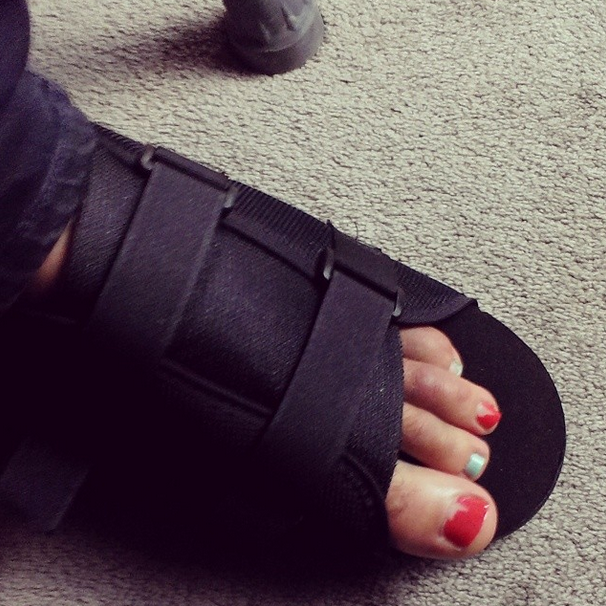 In other news, Max does a pretty amazing Russell Mulcahy-inspired Australia accent and he’s still pretty traumatized by that time he had to wiggle on his brother. And here’s the rest…

On the best part of working on Teen Wolf:

Sinqua: “My favorite part of filming Teen Wolf was honestly just getting a chance to work with all my brothers, man…. They’re really good people and it’s rare that you get those opportunities to work with people that you genuinely like or have a lot in common with.”

Max: “You don’t know how good it is until you leave… Teen Wolf‘s like summer camp: we’re all the same age, we take our shirts off and get in trouble… Sometimes you wonder is this worth it but then at the end of the season you see the show put together and it just reminds us how wonderful it is. And of course. Teen Wolf fans!”

Sinqua: “Tyler (Hoechlin) and I are really, really good friends, so the moment that we were talking about it, he’s like, ‘I’m sorry buddy’ and I’m like, ‘It’s fine, man.’ It’s funny because our characters were saying the same thing… It’ okay. In the sequence you die, and then it’s like cut we’re gonna do it again, so I died like 25 times that day.” 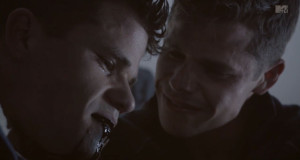 Max: “It’s always tough to say goodbye but shooting a scene like that or that kind of a story is also a lot of fun… I was a morbid little child so when I was little I used to fake my own death all the time… it does get emotional but because it’s pretend it’s actually you allow yourself to – once you just kind of allow yourself to experience it’s a special thing you get to do as an actor. You do get to experience what it’s kind to pass away, it’s kind of magical.”

On the toughest scenes to shoot:

Sinqua: “The scenes that were exteriors – where we’re in the woods and you actually see us running around those were so simple because you’re in the environment. But we would have to do reshoots on a stage. We’d be running on a treadmill.”

Max: “When I first saw a green screen I thought this is going to be so sick but four hours later on a treadmill you’re just like, oh my God. I give up, this is horrible.”

On an Once Upon a Time/Teen Wolf crossover:

Sinqua: “Please do the fan fiction on that. That would be an epic battle, especially now with the characters have been introduced with other powers in season 4 and that’s coming for season 5 of Teen Wolf. That would be an epic, epic battle. I cannot say who would come out on top on that one… Do you guys ever remember dragon ball z. Remember how Dragon Ball Z battles would go on for like six episodes? I used to love that – it would start off and I would be mad because I’d be like, just kill it in the first one. But now, I think that’s how it would be if Once Upon a Time and Teen Wolf merged together.”

Max: “You know it’s funny. Everyone always asks if we do pranks on Teen Wolf and on set, I was never the victim of a prank but offset I ruined Daniel Sharman’s (Isaac) life, which is awesome. Daniel and I went to South America together. He didn’t speak Spanish or Portuguese, which I did. So I would meet random people and be like ‘Hola, this is my friend Daniel. He’s really homesick, he’s just looking for someone to hug him and maybe kiss his neck. And he’d be like, ‘Hey, what’d you say?’ I’d tell him don’t worry about it and all of the sudden he’d have just like three random people hugging him and kissing his neck.”

Most exciting scene to shoot:

Sinqua: “Season 2 there was a scene when Derek and I run into Argent and his wolf hunters and he was like – what is it – never bring claws to a gun fight… there was this whole set up. That was my first day of stunts so for me, it was really exciting because I was like, Oh, this is crazy. I always love how JR would miraculously not have a stunt to do but he’d be standing there real cool. He’d do that all the time but never do a stunt.” 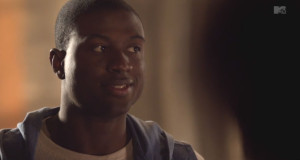 Sinqua: “I discovered a lot of the backstory through the process – just like you guys did. So what you saw when we discovered my sister, that was the beginning of Boyd’s backstory. I wanted to know more and that was the first time I was introduced to the family dynamics and I knew he had a lot of layers and missing pieces internally but I didn’t know exactly what they were so a lot of my questions were beginning after that point. Subsequently we didn’t get a chance to explore that. So the backstory for me is still very inconclusive.”

Max: “It’s fun reading fans responses sometimes, or sometimes we’ll get questions or fans will posit theories about what they imagine the story to be and what they imagine the background to be or what happened to these characters. And you guys are generally spot on, and just keep imagining because I do believe whatever you imagine you can kind of call into reality; you can call it into being. And you’re onto something. So if you don’t have a backstory for characters and you want to know more, just kind of let your imagination wander and I bet you’re right and I bet you’ll get the answers that you imagine.”

Sinqua: “Holland will motivate you to do anything. In one of those subtle ways where you don’t know that you just got hustled and you’re just like what, why am I buying all of this?… She will mother you.”

Max: “Holland is very sweet, Holland’s shown up for me probably more than anyone I’ve met. I’ve been in the hospital twice this year and I wake up not knowing – I drive myself to the hospital because I’m an idiot – and I’ll wake and up and it will be my brother and Holland and she takes care of everyone, she’s like the Teen Wolf mom.”

Max Carver is currently in HBO’s The Leftovers and Sinqua Walls is in the Starz series Power where he gets to “walk around and hold a gun.” Sinqua also has a film, Believe Me, coming out in September that’s “gonna be crazy. So got to theatres and see that.”

I’ll leave you with the best quotes from the panel (no context needed):

Sinqua: My grandmother always taught me that if you don’t say anything people will assume you know what you’re doing.

Max: And then we rip off our shirts and thrust myself into my brother.

Max: I’ll merge with you any time.

Sinqua: Sometimes we would just get together in the gym and just hug it out. Shirtless. Share sweat.