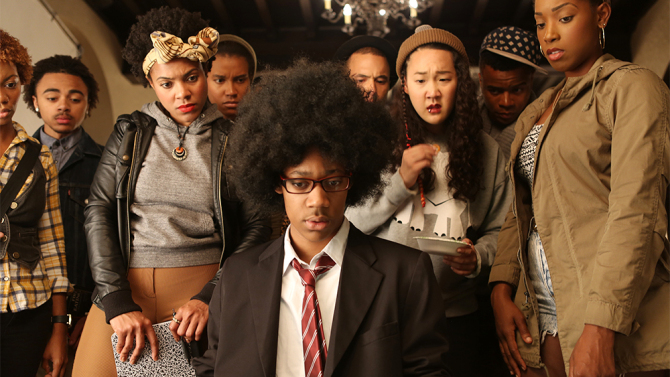 Announced today, Netflix ordered ten episodes of a half-hour comedy based on Simien’s 2014 feature debut. Produced by Lionsgate – the sister company of Roadside Attractions, which released the original film – the series will begin filming later this year, aiming for a 2017 release. Simien will be writing the series adaptation as well as directing the first episode.

Dear White People is a satire centering around a ground of students of color at a prestigious, mostly-white university where concerns over racial issues are generally blown off. Financed by crowdfunding based on a concept trailer that Simien paid for with his tax refund, Dear White People won the U.S. Dramatic Special Jury Award for Breakthrough Talent at the Sundance Film Festival and has grossed more than $4 million domestically. The movie’s original cast includes Tyler James Williams, Tessa Thompson and Dennis Haysbert, but it isn’t yet known whether any of them will return for the series.

During interviews surrounding the movie’s 2014 release, Simien had expressed a desire to continue the story in a television series, along the lines of A Different World. He continued to pursue this idea more recently as the film’s theme became more and more relevant to today’s society.

“During the film’s release, I had the pleasure to speak with hundreds of students and faculty across a variety of college campuses dealing with these very issues in real time,” Simien said. “I’m so grateful to have this platform – not only to give a voice to those too often unheard in our culture, but to also tell great stories from new points of views.”

Justin is a gifted storyteller whose bold, unique vision is perfectly suited to Netflix. His original film Dear White People announced the arrival of a fresh, creative voice that had everyone talking, and we’re excited to have Justin create this new series for our members worldwide.

Dear White People is Lionsgate’s second title with Netflix, after Orange Is the New Black.

Netflix continues to be the place to go for more diverse programming, with shows like Sense8 and Orange Is the New Black. Hopefully Dear White People is just the next in a long line of shows that will help add a little more color to a predominantly white television landscape.

P.S. When I was a little white girl growing up in rural Pennsylvania, A Different World was my jam. So if Dear White People is even going to be remotely similar, I am so ready to love it.

Previous:Naruto’s Fate Revealed in ‘Boruto’ Manga: Comes Across as a Cheap Gimmick