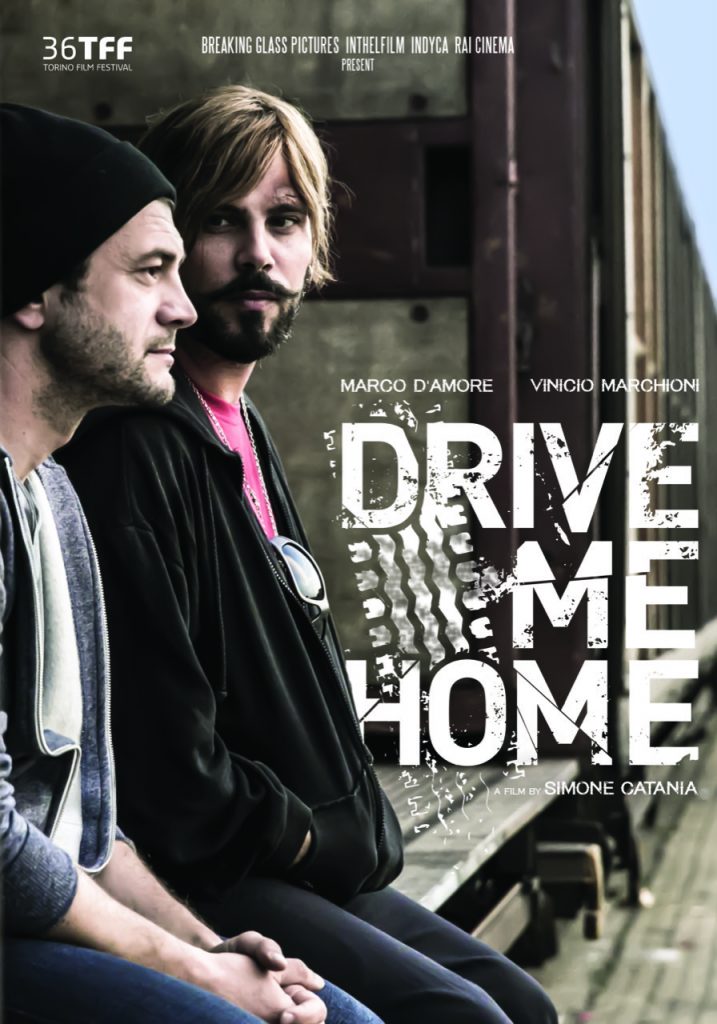 Drive Me Home, from Italian director Simone Catania, offers a road trip movie that focuses on an interesting friendship between a straight and gay character who reconnect after 15 years (since last seeing each other as teens).

I was provided a free screener of Drive Me Home for review from Breaking Glass Pictures. The opinions are my own.

I don’t think there are many queer-centric films that showcase friendships between queer and straight characters without there being any sexual drama involved. That’s what I liked about Drive Me Home. The two leads are actor Marco D’Amore as Agostino and Vinicio Marchioni as Antonio. The two grew up together in a small town in Sicily and have always dreamt of leaving and doing something big.

I appreciated how the movie didn’t add any sexual tension between the two. There wasn’t any one-sided crush or the straight character (Antonio) questioning his sexuality. Drive Me Home is about two friends (as close as brothers) who love each other even if they have stayed apart for years. As far as my opinion goes, I think we need more queer-centric films that feature such friendships between straight and queer characters because they exist in the real world.

Antonio and Agostino grew up together in a small town in Sicily, where they dreamt of living a different life, somewhere, anywhere, else. Now 30-year-olds, they both live abroad but lost touch with each other years ago. When Antonio discovers that the house he grew up in, which has been empty for a long time, is about to be sold at auction, he decides to leave and reconnect with his childhood friend. But their lives have changed a lot. Old conflicts and new revelations bring them through Europe on a truck journey that will change their lives forever…

Our childhood experiences end up having a considerable impact on adult life. We have dreams and goals which change with circumstances as we age. Antonio and Agostino had dreams, too. Growing up, they talked about making a kingdom for themselves in Antonio’s estate. They also showed an interest in music. But then Agostino ran away and Antonio was left alone.

Years later, with his family estate continuing to pull him deeper into debt, Antonio searches for Agostino because he’s the only family he’s got left. Their reunion, after 15 years, is tense. You can easily sense they have issues to address and that’s what you’ll see them dealing them as Drive Me Home progresses through its approximately 90-minute running time.

While I can understand certain viewers having issues with the overall script and pacing, it does have its moments, especially when Antonio and Agostino interact with each other. I wanted more flashbacks of their friendship because I felt there was so much more that could have been explored about their history together.

Also, kudos to co-writers Catania and Fabio Natale for allowing the leads to cry (quite a bit). We need more men crying onscreen, especially when dealing with tough emotional situations. Always bottling up your feelings, even in front of those that love you, doesn’t help anyone.

The film does end on a hopeful note. So, that’s great for those who don’t want to sit through another heartbreaking queer film.

It wouldn’t be a road trip movie without scenic shots. Drive Me Home does offer some. There are mountains, highways, farms, cities, and more. The direction and lighting are good, too. While we get a lot of closeups of the leads, the camera does it in a manner that isn’t too overwhelming (I’m looking at you, The Crimes of Grindelwald) even when the leads are inside the truck.

Drive Me Home premiered at the 36th Edition of the Torino Film Festival, and went on to play Outshine Film Festival.