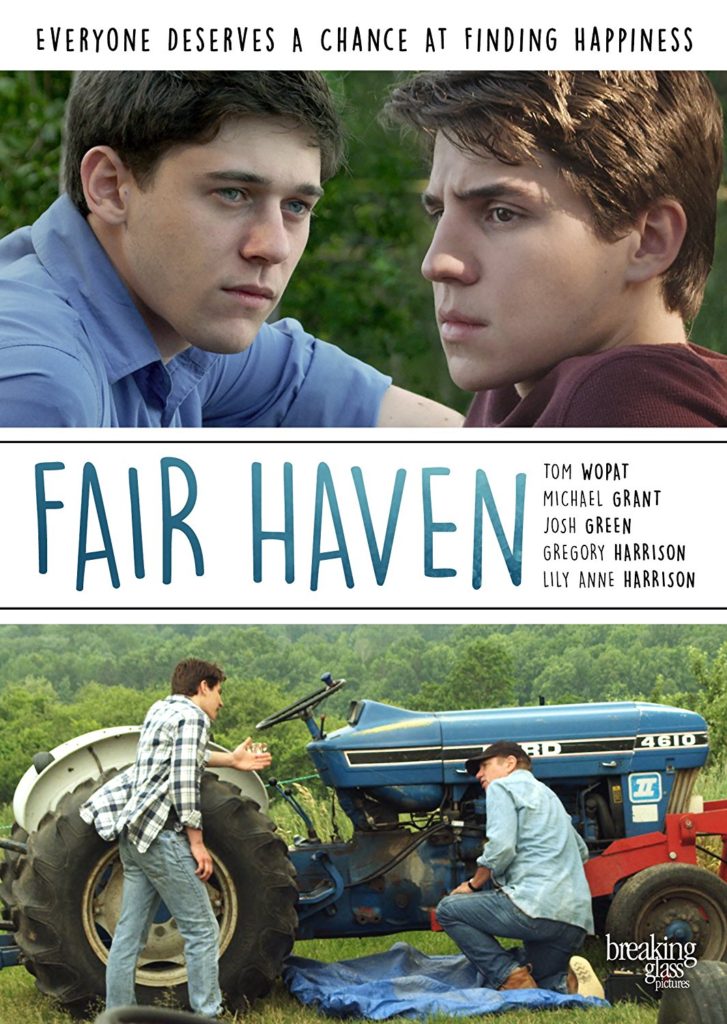 Fair Haven is a story about a young man surviving ex-gay therapy and finding love. While the movie talks about an unfortunate true topic it is also a story about hope.

Being someone who has reviewed a couple of films by Breaking Glass Pictures, I decided to check out some other titles they were offering. The plot for Fair Haven sounded interesting so I decided to watch it. While queer-centric films are known to be depressing I still watched the film because I guess I like having my heartstrings pulled.

Fair Haven is a story that follows James Grant (Michael Grant) as he returns home after going through ex-gay therapy. He tries to stick with what he learned during therapy but things aren’t easy for him especially when he meets Charlie, his boyfriend. Trying to stay on the ‘straight’ path he becomes a bit aggressive towards Charlie Green (Josh Green) and even goes along with dating the pastor’s daughter, Suzy.

It is a simple film that focuses on the characters and the struggles they are going through. James’ father also has his own issues to deal with which I really liked as it helped flesh him out as a character.

Michael Grant’s acting really stands out. There are scenes where he has no dialogue but his facial expressions share a lot with the audience. The therapy he went through clearly didn’t work and he looks miserable. Coupled with the death of his mother, his father wanting him to study agriculture instead of music, and his feelings for Charlie, the teenager has a lot to deal with.

Again, it is Michael’s acting skills that take this story to the next level. His portrayal of James is soft spoken. And while some of the audience might not appreciate a couple of James’ dialogue being delivered in a manner that makes hearing what he said a bit difficult, it fits perfectly with the character. I don’t think James raises his voice once throughout the film even during the arguments with his father. He feels the most true to himself when he’s playing the piano. Michael is also a gifted musician in real life and I think that played a role in making the viewers feel a connection with James whenever he played the piano.

Josh Green is also likable as Charlie. He’s the one who provides James with the love and support he needs while encouraging him to go live the life he wants.

I would have liked to know more about James’ relationship with his mother. They did look happy in the pictures. I also would have liked to see a few scenes where he was being sent to conversion therapy. Did he go willingly? What did he tell Charlie before leaving?

If you’re looking for a queer-centric film that touches on serious topics, religion and being true to yourself, while having a happy ending, then Fair Haven is for you. There are too many heartbreaking queer films out there that show what queer people have to go through. However, it is also important that viewers are offered films which have a message of hope.

Fair Haven is available on DVD and VOD. It was directed by Kerstin Karlhuber. The script is by Jack Bryant.

Have you watched Fair Haven yet? What did you think? Let us know!

Previous:Adventure Time: Elements Will Be an All-New Eight-Part Miniseries
Next: Exploring Vampire Lore and Love with Author Lana Campbell – Interview