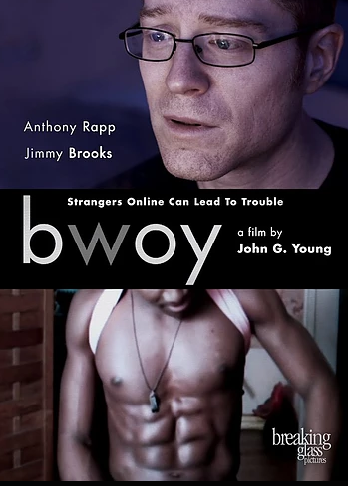 Bwoy is an intense look at human nature and wanting to feel needed by someone. You know it is going to end badly but you can’t help but stay on for the ride.

This post contains minor spoilers for Bwoy. You have been warned.

Bwoy focuses on Bard O’Conner. We see him trying to deal with life after the accidental death of his young son. Growing distant from his wife he initiates finding a connection with young men through a dating website. We all have heard stories, some of us might have experienced it ourselves, about the trouble online affairs can lead to.

Bwoy follows Brad O’Connor, who, after the death of his son, becomes entangled in a chaotic and passionate online love affair with Yenny, a young Jamaican man (newcomer Jimmy Brooks). With both Brad and his wife Marcia seeking solace in destructive ways, their lives and relationships are pushed to the brink, culminating in tragic confrontations that no one can avoid.

Life hasn’t been the same for Brad after the death of his son. We find out in the film that he blames himself. He’s a doctor who now works for a credit card debt collection agency. The entire thing is depressing and you can really feel the emotions through Anthony Rapp’s acting. Using a dating website he ends up meeting Yenny, a young Jamaican gay man, and they begin an affair. Through Yenny, Brad starts to think of a life he could have and we see him struggling with a lot of decisions in Bwoy.

Every scene has an emotional intensity to it. The film is filled with scenes where Anthony has no dialogue but he’s able to convey everything through his acting skills. Even seeing him eating a sandwich means something.

Most of the film shows Brad and Yenny texting and yes, reading texts could become tiring to watch but the story makes you connect with Brad. You’ll actually find yourself wanting to read the online communication he has with Yenny and also warn him about something not feeling right.

In the kind of age we live in, online dating and hookup apps are a reality. That’s why I feel that Bwoy will be relatable to a lot of viewers, especially as a cautionary tale. You can never be sure who you’re dealing with when meeting someone online and initiating a romance.

Furthermore, I would’ve liked to know more about Marcia. She too is trying to deal with her son’s death and is happy when Brad suggests adoption. However, she was a bit too accepting of Brad’s decision at the end. I would’ve liked her to be angry when she found out about the affair but I guess she was too emotionally defeated to put up a fight. Also, Brad not password-protecting his computer made it clear he wanted to get caught. He’s an emotional mess, the kind you can’t help but root for.

Bwoy doesn’t have elaborate set pieces. The entire film is simple and I think that’s why it worked so well. The plot is a slow-burning thriller and it’s the talented cast that’ll keep you hooked till the climax.

You can check out Bwoy during a limited LA theater release on 31 March 2017. It’ll be available on DVD & VOD on 4 April 2017. You can also visit the official website for more information.

For those of you who might not know, Anthony Rapp has also been cast as a queer character in the upcoming Star Trek: Discovery.

What are your opinions about Bwoy? Will you be watching it? Let us know.

Note: I was provided an online screener by Breaking Glass Pictures. The opinions are my own.

Previous:Marvel Reveals Why The Original X-Men Can’t Return To The Past And It’s Kind Of Stupid
Next: Valente’s “The Refrigerator Monologues” Offers Great Premise, Poor Execution