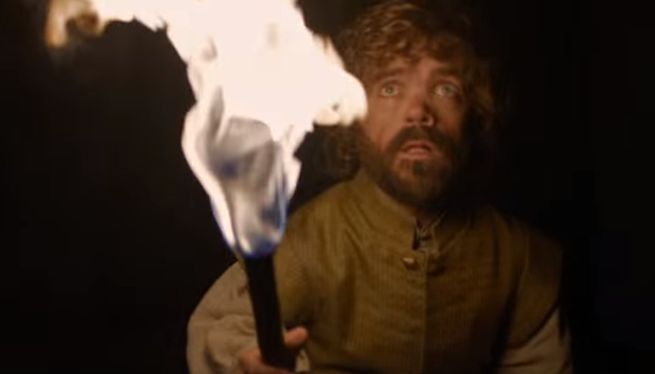 There was so much right about “Home” I almost feel bad for doubting this season.  Almost. 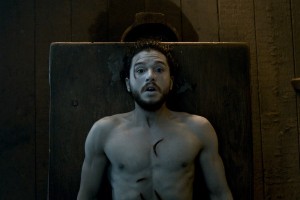 There’s been a lot to criticize about Game of Thrones lately, but “Home” felt like it was actually gaining some much needed momentum.  The first episode of the season was essentially just moving puzzle pieces into place and left much to be desired, but this week things actually happened.  And by ‘things’ I obviously mean Jon Snow is alive, thank the Old Gods and the New.  No, seriously!  I was afraid they were going to drag this on until the very end of the season, but BAM, episode two and our rugged Lord Commander of the Night’s Watch has taken his first breath since he was stabbed to death last season.  We forgive you, Melisandre!  Sure, you burned countless people alive including a child, but we forgive you!

Jon Snow’s resurrection was the last few seconds of the episode, however.  So much more happened in “Home” it was almost a struggle to keep up.  The first scene starts with the return of Bran Stark, who was absent for all of last season as he was presumably training with the Three-Eyed Raven.  The most fascinating part of the scene with Bran is that we finally got to lay our eyes on the infamous Lyanna Stark, who’s been talked about so incredibly much but has never actually made an appearance because she died 17 years before the start of the show.  Bran’s visions will allow them to insert flashbacks for not only Lyanna, but all of Robert’s Rebellion.  This is a huge gap for show-only viewers as the show doesn’t really lend itself well to flashbacks and having characters ramble on about history comes off as really clunky dialogue.  Bran’s Greensight will let us see so much (*cough* “Promise me, Ned” *cough*).  I’m so pumped for his visions I can’t even describe it.

After visiting with Bran, we hop to the Wall where the Wildlings come charging in to save the day.  The Wildlings and Jon Snow were kind of bros, so it’s no surprise they won’t let the usurping Lord Commander kill all the remaining Jon Snow loyalists without doing something about it.  It’s also quite hilarious just how ill-equipped the Night’s Watch is.  I mean, we knew they were in pretty bad shape already.  It’s been a theme since season 1/book 1.  But the moment the Wildlings come charging through the doors you just know the battle was over.  The Night’s Watch stands no chance against the White Walkers on their own.  And really, while all the humans are getting into their petty squabbles about castles and kingdoms and marriage and such, the White Walkers are kind of the biggest looming threat that 99% of Westeros just doesn’t seem to care about.  The Wildlings do, though. And they care about Jon Snow, too.  So screw you, Fakey McFake Lord Commander.  The Wildlings are tired of your crap. 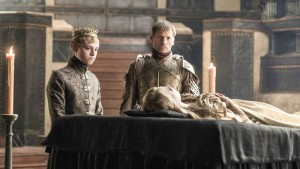 The weakest part of “Home” is what’s going on in King’s Landing.  The Lannister family drama, while generally important in relation to the major political events of the Seven Kingdoms, is getting really tiring.  Cersei is a complex and interesting character, but with the imminent White Walker approach to the North and everything that’s going on in Essos, King’s Landing seems really boring. I feel for her and the fact that she’s lost yet another child.  I really do.  But I care about, you know, all that ice and fire stuff a heck of a lot more.  The Lannisters just need to go run off to Casterly Rock and have their little incest drama play out there while King’s Landing starts to focus on the actual problems at hand.

The only Lannister in Westeros I am actually concerned about right now is Tommen.  The poor guy was never meant to be King and I fear he’s not long for this world.  He will die.  I will put money on that now.  And that will probably shatter Cersei beyond repair.  She’s barely clinging on right now and that’ll be the final push.  I don’t see happy things in the future for any of the Lannisters that are left in Westeros.  Tommen doesn’t deserve to suffer some horrid fate because his parents’ and brother’s mistakes, but that’s going to happen.  Sorry, dude.

And I don’t want to talk about Jaime.  I don’t.  Next please.

Up next is Tyrion and Meereen and dragons and oh my god somebody hold me.  I’m so excited about this entire sequence that I am literally vibrating.  There’s been long running speculation that Tyrion is actually a Targaryen.  I know, it sounds really off the wall doesn’t it?  But read this Reddit thread.  If true, the moment when Tyrion confronts the dragons is an incredibly emotional and fate realizing moment.  But hey, that theory is sort of bonkers and probably not true anyway, so let’s remove those theory goggles and look at the scene without them.  Tyrion is a man who’s extremely well read and has been studying dragons since he was a small child.  He approaches them knowing they could swallow him whole, but feels that freeing them from their confines in the dungeon is more important than possibly dying.  I got highly emotional here and I’m pretty sure I’m going to watch that short scene over and over again.

One thing, though.  Did the CGI effects on the dragons look a little weird to anyone else?  This show is usually top notch with special effects, but for some reason they didn’t seem as smooth as usual.  But hey, most of my favorite genre shows are from the 90’s so that’s really not a huge thing for me. I just expected perfection from a 2016 HBO show.  But that’s fine.  I was so emotionally moved even the sort of choppy effects couldn’t get me down. 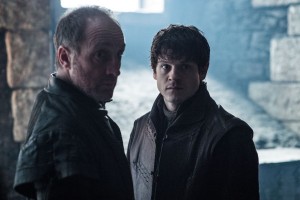 We jump from Meereen back to Winterfell where Ramsay is still a bastard in both the literal and figurative sense.  He’s already a mass murder, torturer, and rapist.  So hey, let’s add fratricide and baby murder to his list of crimes.  Why not?  I really can’t wait until he gets taken out.  When I was reading the books I’d been rooting for Joffrey to get eaten by one of Daenerys’s dragons.  He died before she ever made it to Westeros, though.  But this time maybe I’ll get my wish.  Maybe he’ll become a dragon chew toy and all will be right in the world.  The only other satisfying end is if Sansa gets to execute him.  Hey, she’s the heir to Winterfell.  She’s got that power.  That might sound horrific to want the character I’ve been rooting to protect for so long to chop someone’s head off, but oh well.  I’m horrific I guess.

Speaking of Sansa, her scenes this week were exactly what I needed.  I’ve been craving for the Stark sisters to know about each other’s fates after Ned’s execution.  They’ve both grown up so much since they last saw each other.  Sansa’s knowing smirk that Arya was dressed as a boy made me so happy.  It was like “yep, that’s totally my sister.”  I want these two to be reunited more than ever.  They were antagonistic towards each other when they were children, but they’ve come so far since then.  They are not the same little girls that they were in King’s Landing so many years ago.  If the scene ever comes where they see each other again, I’m pretty sure I’ll weep uncontrollably and will need a firm hug to get through it all. 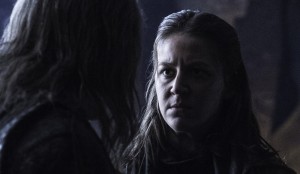 And since we’re on the topic of my favorite women in the show, YARA GREYJOY!  Or “Asha” for those you who’ve read the books.  She often gets overlooked for the badass that she truly is, but now we’re going to be dipping into one of my favorite subplots of the entire book series.  With her father and two of her brothers dead, and the other rightful heir to the Iron Islands captured by the Boltons (as far as she knows, at least) and unable to produce offspring, Yara should be the heir to the Iron Islands.  It’s not that easy, though.  She’s got an uncle and the world of Game of Thrones is notoriously misogynistic when it comes to inheritance and titles (except for Dorne).  She’s got an uncle so there has to be a kingsmoot to decide on who will rule the Iron Islands. I don’t think it’s any surprise that I’m on Yara’s side here.  With everything else going on on the show I fear that this subplot won’t get the attention it deserves, but I’m glad we get to see it play out.  It may or may not be important to the overall plot, but Yara is important to me and if you disagree, well, good for you but I don’t care.  I’ll be over here rooting for my Queen and enjoying every minute of it.

After our little visit to the Iron Islands we jump back to Castle Black where all that amazing Jon Snow magic happens.  For the first time we see Melisandre lack confidence in her own abilities and watch as everyone gives up hope that he’ll be brought back.  But then BAM he gasps for air, his eyes snap open, and the credits roll.

Can this show keep up with how great this episode was, or will it backslide and rely on sexual assault and nudity once more?  Will the plot get stuck spinning its wheels in the mud again without any forward momentum?  Or was this episode a pace setter and are we about to actually start letting things happen with our characters?

Previous:Harry Potter and the Cursed Child Unveils Theatre Display
Next: Remembering Fallen Hero Remus Lupin on the Anniversary of the Battle of Hogwarts