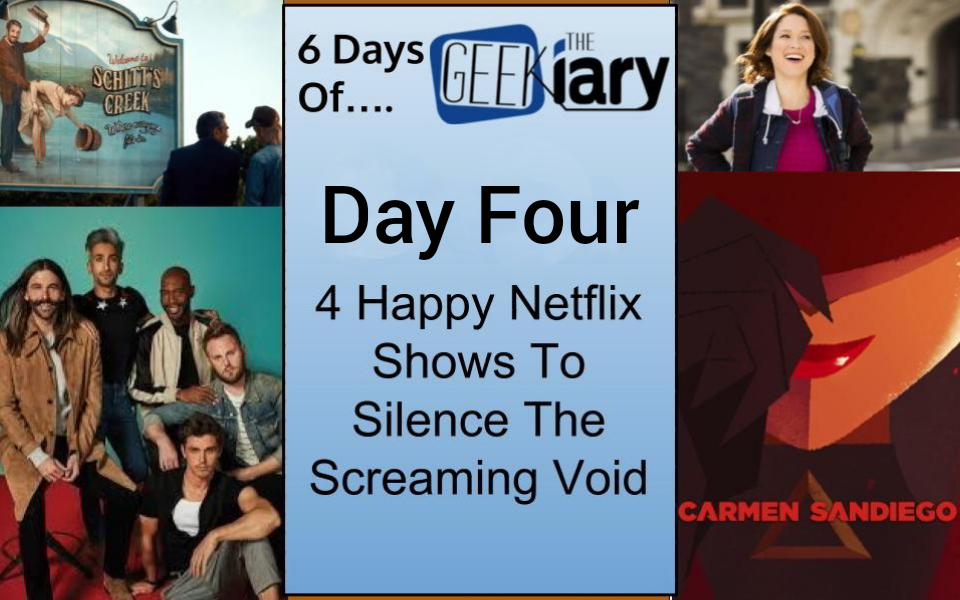 To celebrate our six-year anniversary, we’ll be highlighting things that matter most to us here at The Geekiary. We’re heading into Day Four – 4 Happy Netflix Shows to Silence the Screaming Void!

The world seems like a mess right now. Things are seriously scary, and while it’s important to take active role in pushing for what’s right and trying to help where you can, it’s equally important to practice a little self-care with your favorite snacks and some Netflix.

In times like these, mainlining Criminal Minds sometimes feels a little too dark. Here’s what we at The Geekiary staff pull up when we need something fluffy to take our minds off the actual garbage fire that is the world political stage. 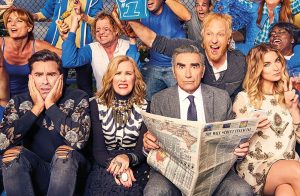 Erin turns to Schitt’s Creek when she wants to relax with a show.

Schitt’s Creek is the best current show on TV. With comedy powerhouses Eugene Levy and Catherine O’Hara anchoring, it’s easy to come for them, but stay for the witty writing and amazing acting by Annie Murphy and co-creator and writer Dan Levy. What starts out as a fish-out-of-water show with a wealthy and shallow family falling from grace and finding solace in a small town becomes one of the most heart-warming shows ever created. You’ll fall for the family’s friendships and relationships made, but fall harder for the family dynamic and love that was there all along.

Not to mention that the show has one of the best pansexual characters on TV, and demonstrates some of the healthiest and most realistic relationships in the scripted television format. And obviously, it’s Canadian and available to binge on Netflix. What’s not to love? 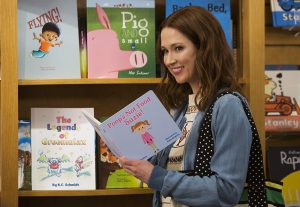 Angelica is all about Unbreakable Kimmy Schmidt.

In this crazy world, we can all use a show that distracts us from it and that show is Unbreakable Kimmy Schmidt. Starring Ellie Kemper as Kimmy, Titus Burgess as Titus Andromeda and Jane Krakowski as Jacqueline and created by Tina Fey, this show is funny and makes me laugh every single episode.

Kimmy was kidnapped as a child and even though she’s an adult now, she still lives with child-like abandon. Her exploits with her gay, super drama queen roommate and with her rich trophy wife friend delight anyone who watches. The show takes what could be serious matters and presents them with levity and heart in a way that can inspire you for your own life.

Angelica highly recommends Unbreakable Kimmy Schmidt as a binge watch weekend or just when you need to smile! 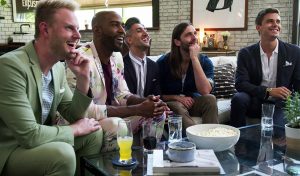 Angel recommends Queer Eye because it’s a low-stakes, fluffy, positive reality show that’s everything you need to distract from the impending doom that is our current reality.

The premise of this show could easily make seem it a joke – but it’s not. It’s a group of caring people reaching out to make a difference in someone’s life with heart, wit, and charm.

Even when it touches on real world issues that might bring reality crashing back down around you (one of their makeovers has a MAGA hat, for example, and another episode touches on bigotry and religion), they manage to steer the topic towards a more positive tone.

It’s all about love and acceptance on Queer Eye.  It’s warm and fuzzy and delightful, and it is everything you need after a rough day on the internet. 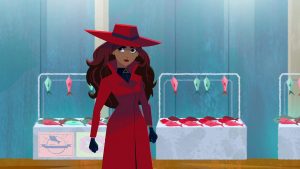 Khai likes clever shows aimed at kids when things get rough, because you know there’s going to be a happy ending in a kid’s show. Right now that’s Carmen Sandiego: a smart, visually appealing series that manages to be interesting for adults and kids alike.

Like a lot of today’s movies and TV, this is a reboot- but not of a fiction series. The original PBS series Where In The World Is Carmen Sandiego? was a game show in the early ’90s. It had a super catchy theme song and a focus on geography. There was nothing too stressful or demanding – just fun geography trivia and some goofy puns delivered by The Chief.

Carmen Sandiego takes the same low-stress, high fun approach. It was conceived as an origin story for the game show’s titular villain. Carmen is a master thief who’s dedicated to foiling the plans of her former mentors at V.I.L.E. It’s a fictional series, but it manages to sneak in some education via banter between Carmen and her back-up team Ivy and Zack. There’s even a secret hacker friend in the form of Player.

The gang may stumble a few times, but in the end they always stay one step ahead of both V.I.L.E. and lawkeeping organization A.C.M.E. It’s a lot of fun to watch Carmen run circles around her opponents. If you want a hint of mystery and a little virtuous hint of educational TV, and really sharp writing, Carmen Sandiego is for you.