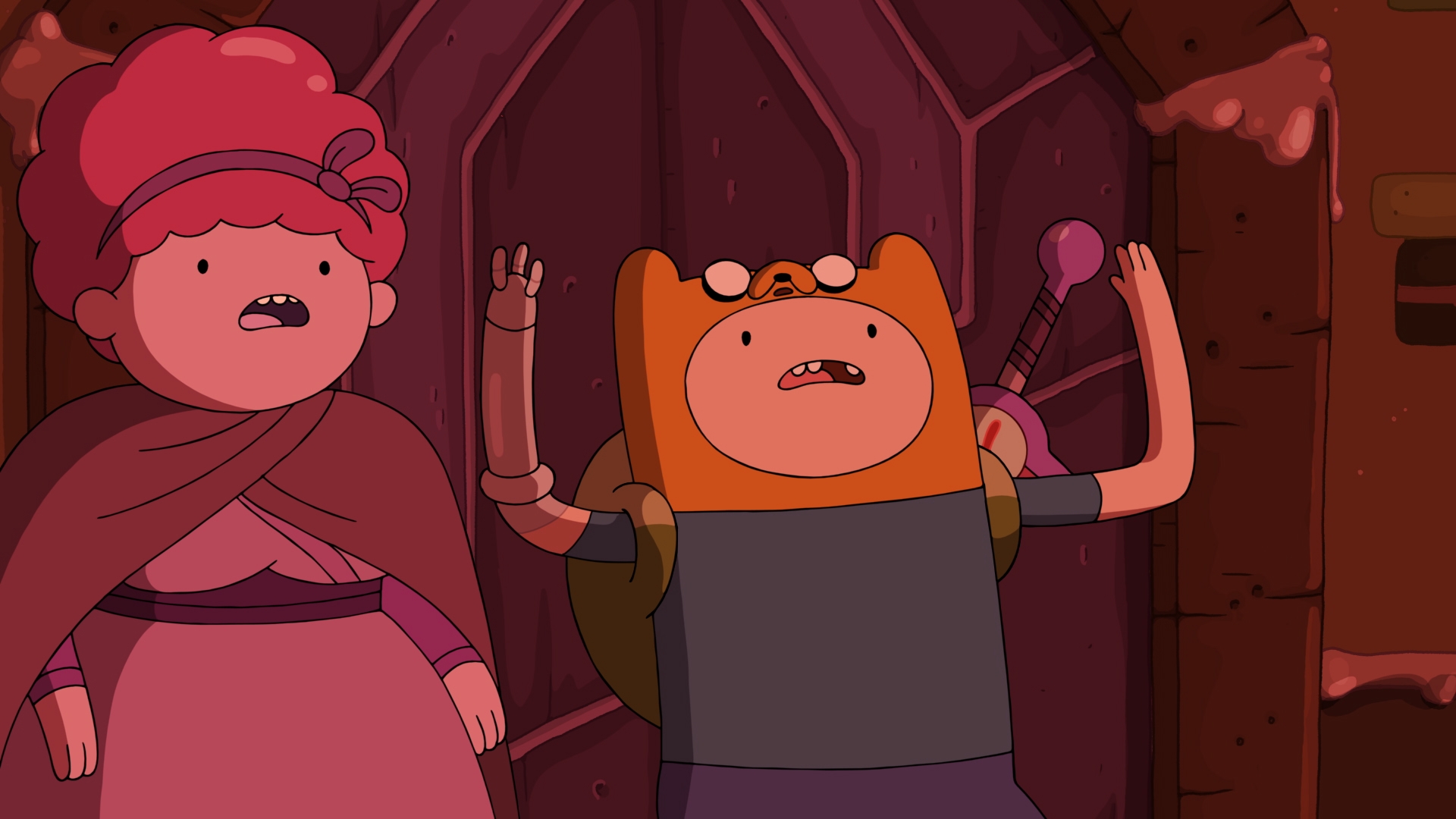 Something is brewing in the kingdom of Gumbaldia, and it’s up to Finn and Jake to find a diplomatic solution before war breaks out between Princess Bubblegum and her evil Uncle Gumbald.

Princess Bubblegum is developing the film she took of Gumbald’s worrying military movements in Gumbaldia when Finn opens the door to her darkroom and donks up her recon. He takes a deep breath and tells PB that he thinks she shouldn’t go to war with her uncle. “Finn, we all love how sweet you are,” the candy princess says, bathed in red light, ominous music pumping behind her. “But sometimes we just have to buckle down and do things the ugly way.”

Considering she once executed her entire legion of rattleball warriors because she decided they weren’t loyal enough, this is not an idle threat.

Finn and Jake pass the citizens of the Candy Kingdom making ready for war, practicing their fighting skills and donning menacing armor. Finn decides to go to Gumbaldia on a diplomatic mission himself, and Jake, healthy and happy and whole after being lost in space for five weeks until just last episode, slides around Finn in the shape of his normal white animal ears hat. It’s very cute, and Finn and Jake are unashamed of that. “That’s the number one priority for kick butt diplomacy,” Finn says. “The cuteness offensive!”

On their way to Gumbaldia, Finn remarks that he has really grown as a person. He used to be all about violence, but now is seeking the peaceful option. Jake tells him, “You’re a beautiful flower and I love to watch you grow.” Just like their unabashed delight at the cuteness of Jake-hat on Finn’s head, Adventure Time inverts expectations of masculinity and continues to display thoughtful, gentle love between male characters.

All the signs of “Gumbaldia” point the audience to being on Finn’s peace-seeking side versus Princess Bubblegum’s darker jingoism. Gumbald uses almost the exact same rhetoric Peebles did about him: he’s only responding to her military movements in the Candy Kingdom, she “forced his hand” on his own increasing army. Finn points this out: “You’re gum from the same sidewalk,” to no avail. Even when Finn seems to change his mind in the face of Gumbald’s giant automaton and general wretchedness, there is a moment of redemption offered when he saves Gumbald’s life. All it took was proving to the big bad bully that he was sincere, and now Finn has a chance to foster a lasting peace between Gumbaldia and the Candy Kingdom.

He has dinner with all the Gum relatives, including Aunt Lolly, who has been on Finn’s side from the moment he got to Gumbaldia, and Cousin Chicle, who is apparently “the funny one.” Finn regales them with stories, and everyone is getting along great. Uncle Gumbald signs a peace treaty, and Finn and Jake are showered with celebratory pink glitter. As dogs are wont to do, Jake shakes himself off. Some of the glitter gets on Cousin Chicle, and he runs from the room in distress. “Now there’s a guy who… who really cares about his hair!” says Aunt Lolly to break the awkward silence that follows. “Oh, Cousin Chicle!” Finn and Jake shrug in unison (adorably). “Man, I almost thought that was something really serious,” adds Jake.

Briefly it seems like the episode is going to be about refusing to give up old grudges. Fern menaces Finn when he first arrives, and is later seen grousing as Finn is accepted at the dinner table. When Fern announces “I have everything you have!” only to be punched in the face by Jake, it seems there will be an incoming moral on how what he needs is a family. But as has been a theme for this recent stretch of episodes, the writers have different plans.

Back at the Candy Kingdom, Princess Bubblegum is disbelieving to see the signed peace treaty from her formerly evil Uncle Gumbald. She praises Finn and Jake, despite noticing their strange glittery appearance. Peppermint Butler obligingly wipes off the heroes as Finn gives a rousing moral lesson about empathizing with enemies. Then PepBut returns the towel to his arm, and poofs into a baby.

Finn was wrong the whole time! The glitter was Gumbald’s personal “dumb dumb solution,” (erstwhile known as happy juice) which turns candy people into docile simpletons. The Gums of Gumbaldia were never interested in peace. Sweet Aunt Lolly manufactured the moment Finn rescued Gumbald; she was the mastermind behind the whole scheme, knowing a fake peace would lull Peebles into a false sense of security.

In the end, though, it doesn’t matter that PB gets wise to their scam. They have amassed not only a candy army, but a practical who’s who list of Adventure Time bad guys.

Princess Bubblegum’s returning family has felt like the final big arc of Adventure Time for a long time, and this list of villains coming together for an epic boss battle confirms it. The Lich, being inside of Sweat Pea, might be a non-factor… or he might be one of the keys to the whole endgame.

Like in the last episode, “Temple of Mars,” Adventure Time is keeping us on our toes with inverted narrative expectation. Just because Finn has grown up a lot in terms of his relationship to violence, doesn’t mean he knows everything. He’s still a kid in a lot of ways, sweet and naive.

I want to give a special shout out to the dialogue of “Gumbaldia.” Truly, I will miss the sharp, poignant, funny, silly, everything about this wonderful show. They are going out on some of their most excellent content to date. That’s nine seasons of mathematical awesome.