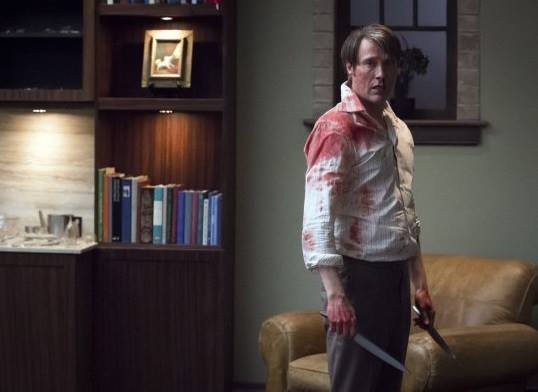 The last fifteen to twenty minutes of this finale had me hyperventilating big time.  A huge congratulations to Bryan Fuller and Company for such a fantastic season!  With so much in the air, we can only look forward to next year and theorize about what’s to come.  But before I give too much away, let’s jump into my thoughts and feels on “Mizumono”! 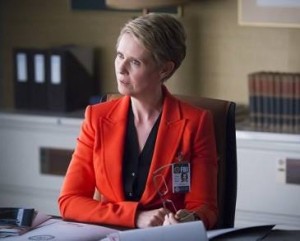 Provided that they survive, Jack and Will are in major trouble come next season.  Cynthia Nixon’s character returned and put both of these men in a world of hurt in regards to Randall Tier and Hannibal Lecter.  She hit the nail on the head in dismissing Will’s flimsy self-defense excuse, pointing out that the mutilation of the body went well beyond the bounds of that.  She is building up such a case against them that I’m genuinely worried about what will happen to them in season three.  Again, provided that they are both still alive to be punish, what exactly will happen to them?  I can’t see them sticking Will in jail for half a season again, but surely this incident will put an end to his working with the FBI.  And what about Jack?  Will he lose his position at the BAU?  Who will care for Bella if he is put in jail?  As it stands with their case against Hannibal, the most they can charge him with is Abigail’s imprisonment and attempted murder/murder and the attempted murders of Will and Jack.  They still have no evidence, circumstantial or otherwise, linking him to the Chesapeake Ripper murders, which was their goal in the first place.  As of right now, that case is tied up with a neat little bow with Dr. Chilton as their man.  The lack of mentioning him makes me curious about whether or not he is truly dead.  Yet another question for season three discussions, I suppose.

After this episode, I don’t think that it is unreasonable for some fans to believe that Hannigram is canon now.  I think, despite what his initial intentions and motivations were, Will couldn’t shake the connection he knew he and Hannibal had.  Even with his myriad of faults and manipulations, Hannibal was the first person to understand and accept Will.  I couldn’t help but feel sorry for Hannibal because you could see a part of him really wanted Will to leave with him.  The look of betrayal on Hannibal’s face when he smelled Freddie Lounds on Will was painful.  But even then, he was practically pleading with Will, saying, “We could disappear now.  Tonight.  Feed your dogs, leave a note for Alana and never see Jack again.  Almost polite.”  I think that Hannibal, much like Dexter Morgan, wanted a companion, someone with whom he could truly be himself, and he thought he had found that in Will.

Whether or not you ship Will and Hannibal together, there can be no denying that they share a connection of some kind.  A 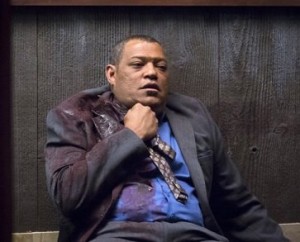 connection which has put plenty of people in mortal peril.  Jack was the first to go down, locking himself in the pantry with a gushing neck wound.  Alana was next when she ran upstairs to escape Hannibal, only to be shoved out of the window by none other than Abigail Hobbs!  This season certainly seems to be one for bringing people back from the dead.  An interesting theory that my mom posed about Abigail was that she had been living in Hannibal’s house this entire time and that perhaps that was what Katz saw before she was murdered.  Either way, given the connection Hannibal forged with Abigail, going so far as to say she reminded him of his deceased little sister Mysha, it didn’t surprise me upon reflection that he let her live.  But in the heat of the moment, I was losing my mind.  Perhaps it’s just the shipper’s wishing thinking in me, but I can’t help but think Hannibal kept her alive so that the three of them could leave together and form their own little strange family.  But Will’s betrayal prevented that.

Before and after Will was practically gutted, Hannibal once again tugged at my heart strings with his expression and speech towards Will.  I think it is a great credit to Mads Mikkelsen’s masterful performance that allows the viewers to feel such sympathy and pity for this villain.  I couldn’t help but get a sense of heartache and betrayal and anger from him as he spoke of the rare gift he offered Will only to have it turned away.  Perhaps that was why he turned on Abigail like he did, denying Will the happy future he had denied Hannibal.  The symmetry between season one and now was quite beautiful, from the phrasing of the phone call to Hannibal cutting Abigail’s throat.  But Hannibal wasn’t the only one tugging at my heart strings, as Will was practically yanking them from my chest with the look of despair and devastation on his face when Hannibal cut Abigail’s throat.  He really looked at her as something like a surrogate daughter and felt responsible for her.  So to have her taken from him like that again was just gut-wrenching.  I can’t help but hope beyond hope that Abigail will survive so that Will won’t lose her again.

With the fates of four characters hanging in the balance, you’d think the writers wouldn’t have been able to pull out any more last-minute shockers.  But you would be wrong.  After the credits, we find Hannibal sitting on a plane awaiting take off and seated next to him was Bedelia Du Maurier.  This, of course, raises so many different questions.  Was she working with Hannibal all along?  If so, what was the purpose of her visit to the FBI?  What sort of role will she have in season three, especially given Gillian Anderson’s role on the BBC series The Fall?  With Comic Con right around the corner, Bryan Fuller will have some teases to these questions and more in regards to season three.

What are your thoughts of this season finale?  Was it everything you hoped for or did it leave you wanting?  Comment below and thank you for reading!  See you next season, Fannibals!