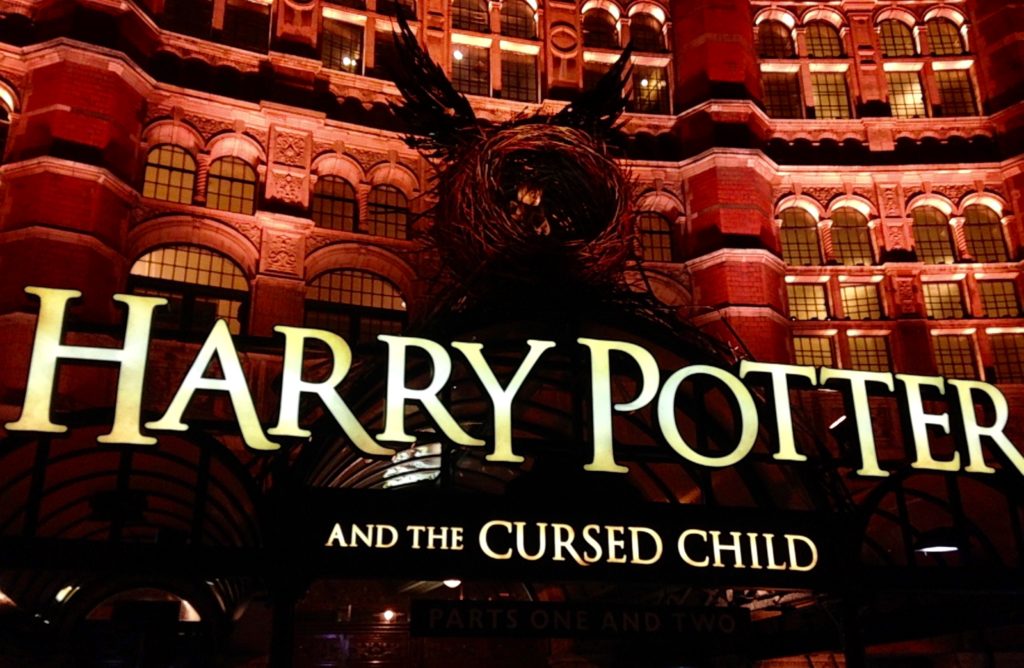 There is only one way to describe the experience of seeing Harry Potter and The Cursed Child live: mostly magic. Don’t get me wrong, all of the problems that exist with the script exist on the stage. In fact some of them are EVEN WORSE, like the lack of female characters – I’ll get to that in a bit. But honest to goodness as I sat there slack jawed and watched the world of magic come to life before my eyes it was hard not to be entranced, just a little.

This is a mostly spoiler free review of The Cursed Child, but some might have slipped through so enter at your own risk!

My experience was tainted, I know that. I did not #KeepTheSecrets – I caved and read every spoiler I could then when the script was released, I devoured it in a couple of hours. I’ll be honest and admit that part of me regrets not going into the show with fresh eyes, but that part of me is not very big because I had a way better time laughing and crying with fellow fans about this mess of a story than I ever would have sitting alone and spoiler free in the theater.

Here’s the deal, even with all the magic and the phenomenal performances the story is still a mess and it’s still really really really disappointing. That said there are some things that are better and worse on the stage than they are on the page. For starters, the cast do a pretty good job of selling the sometimes awkward dialogue and amazingly Anthony Boyle somehow makes Scorpius even more loveable – although I wasn’t sure about his performance at the start, he makes it work.

Something I didn’t expect was the music. There were times that this play almost felt like a musical, which added to the magic of it all I suspect. It really takes you on a journey and holds the mess of clunky time shifts together so that the story flows reasonably well. (Or as well as a story like this can flow, I guess.)

You’d be forgiven for thinking, at this point, that I actually ended up loving this play when I finally saw it as it was meant to be seen. You wouldn’t be wrong, not entirely. I did love it, for a lot of reasons – most of them are nostalgic and emotional, but they’re still valid. I think the fact there were parts that I loved wholeheartedly actually made the bad things even more disappointing. If it was all equally terrible I could have dismissed the whole thing and moved on without much more than a sigh. But then there it was, beautiful and magical and exactly what I dreamed…except not.

There are about a million tiny things wrong with this story, and if I go into all of them I’m going to be writing for way longer than anyone wants to read. Instead I’m going to focus on one thing: women. It shouldn’t be shocking that my radical feminist heart can’t let go of the treatment of female characters in The Cursed Child – I’ve already written a rant about the script – but this is one of those things that is worse in translation.

It’s one thing to read about all these potentially wonderful female characters being sidelined; it’s another thing to watch it happen before your eyes. There’s Rose, in all of her stubborn beautiful glory, stepping in to deliver the occasional line or stand in the background like a constant reminder of what could have been: the joy we all felt when we saw the first cast photos and we thought we were going to get the Golden Trio 2.0, but instead we got a weird sort of no homo Draco/Harry fic.

Worse than just sidelining Rose, her role as “the girl” in the trio is taken by the single worst character ever written. Like honestly, all the self-inserted original characters I wrote as a teenager combined couldn’t hold a torch to Delphi Diggory. Her name is even alliterative, for goodness sake! Seriously, she’s so terrible I don’t even know how to explain how terrible she is without just pointing at her with a sort of despairing awe on my face. And honestly, if you read the play and you thought she was bad then, you have no idea because she is so much worse when she’s standing there in front of you.

The comparison to my teenage fanfic is really accurate in this circumstance. I know everyone’s been comparing The Cursed Child to fanfic because it uses familiar tropes and I know that comparison is not really fair to fanfic but this is a very specific example. Delphi is a cliche of bad fanfiction. There are definitely characters like her around, but they’re not nearly as prevalent as people seem to think. But that image you get of the self-inserted Mary Sue with zero characterization that kind of appears from nowhere to significantly alter the world of the male protagonist? That is Delphi Diggory.

Even at my most self-indulgent, my fourteen year old self would have given Delphi more depth than she has in The Cursed Child. I feel terrible for saying this because she’s one of the few female characters in this play that gets any kind of agency…but she’s just so bad. Not even my stubborn desire to love poorly written female characters could make me care about this paper cut of a person. She’s the worst.

Okay, so maybe I’m a little emotional about this, but you have to understand how much I wanted to love this story. I should have loved this story! I mean, I’ve been a Draco Malfoy fangirl since I was 12 – and that was before Tom Felton was cast so don’t think about belittling my love JK – and The Cursed Child finally gives him the redemption I’ve been dreaming about for over half my life…but I can’t even enjoy it because Jack Thorne, JK Rowling, and John Tiffany forgot that women are people.

I’m just really sad about it I guess.

Look, The Cursed Child is definitely entertaining. It’s not a bad play if you’re not looking for anything beyond the obvious, and the staging is genuinely spectacular. There were people around me in the audience that were gasping in shock every time a plot point was revealed, so I can’t say it’s not worth the time or money. If this had been released 5 years ago I probably would have loved it, but I’m not going to accept the dregs anymore. We deserved more. Harry Potter deserved more, and I’ll always be disappointed by The Cursed Child.