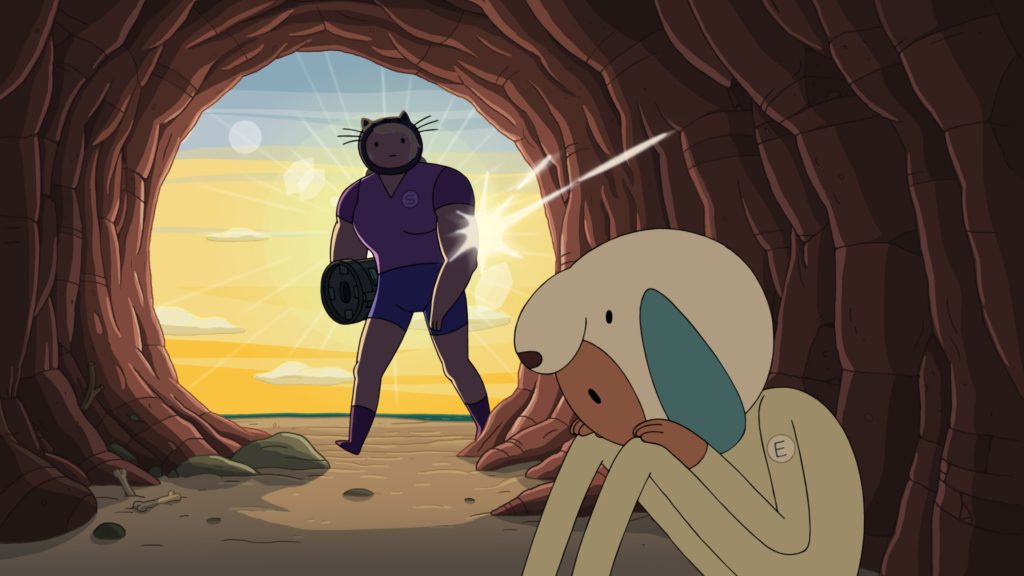 So far, the humans encountered in Islands have been in bad shape…or dead. But in “Hide and Seek” we see a thriving society (at least on the surface).

Considering that baby Finn shows up in “Min and Marty,” the decimation of the humans must have happened in the last sixteen years.

Finn, Jake, and BMO find Susan washed up on the shores of yet another island, but she isn’t responding to them at all. This is because she’s caught up in an intense series of flashbacks, as she returns to the place that was once her home, and finds her childhood rushing back. Susan’s name was once Kara, and she was trained from childhood to be a ‘Seeker’ –  a group of super strong men and women who acted as their society’s police force. Chief among their duties was hunting down ‘Hiders’: anyone who wanted to hide from their people’s vision and escape the islands.

(And isn’t that a wonderful bit of naming, since the Hiders are the actual people seeking out true ideas, while the Seekers hide from them.)

Among the Hiders that Susan/Kara remembers catching is a red-haired, mustachioed man: Martin Mertens. After his capture he is sent to the hospital and is taken in by one Dr. Minerva – blonde, just like her son Finn (right??? I mean, yes, it’s confirmed in the next episode. But man, it’s been a long time coming!)

Kara’s best friend had been Frieda (wonderfully voiced by Jasika Nicole of Fringe and Welcome to Night Vale fame), a young girl who was being trained as a scientist. Frieda’s curiosity about the outside world grew, and she put her skills to use designing a boat which could bypass the Colossus that ‘guarded’ their islands. When Kara discovered the truth – that Freiya would be willing to leave both their home and her – she began to question her entire worldview. Ultimately Kara decided to help Frieda, but unfortunately, Dr. Gross has already deduced the truth. The chip installed in Kara’s brain forced her to robotically capture her friend, and that was the last they saw of each other before Frieda was sent to reeducation.

It is pretty much a given that this backstory was not planned out when Susan was first introduced to the show. But then, it’s likely that neither Ice King’s or Marceline’s was, either, and this doesn’t stop it from being a powerful piece. Plus, the attraction between Frieda and Susan Strong is evident even as an innocent childhood crush, and it’s so awesome to get more queer representation on the show!

We can’t know for sure if Dr. Gross’s song would have read as immediate propaganda if we didn’t already know she was a villain from the end of season 7, but the dystopian feel of it all is chilling. Each citizen with their assigned role, following the rules set by quasi-religious founding figures, singing and chanting affirmations that the are loyal to the state (“Find them, catch them, save them!”) We do know that sometime between the present and Susan’s flashbacks, the Islands and their people were mostly destroyed. So where does that leave Dr. Minerva and Martin Mertens? 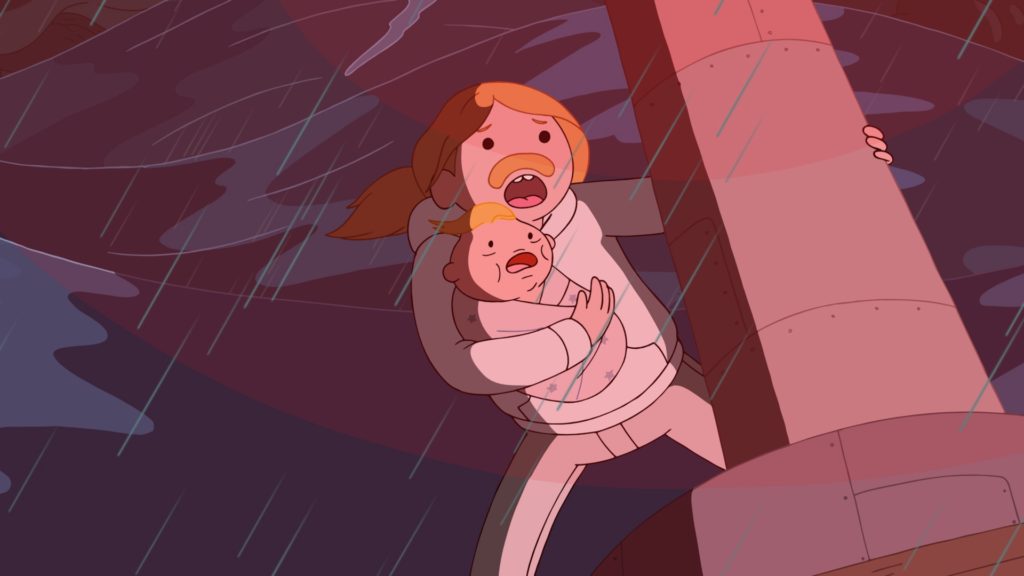 After her series of flashbacks, Susan/Kara starts out “Min and Marty” by speaking in grammatical standard English and she declaring that she “missed big words.” Then she drops a bomb on Finn as she prepares a vessel to take them to another Island: “I’m taking you to your mom.” We get official confirmation that Dr. Minerva from “Hide and Seek” is in fact Finn’s mother. Her title, besides Doctor, is “Helper,” and she seems as genuinely altruistic as her son.

This is in stark contrast to young vagabond Martin Mertens, who cons would-be Hiders by trading supposed intel for gadgets and then reporting them to the authorities. Through a misunderstanding, he finds himself in the situation that led to him being captured by the Seekers, and that’s when “Min and Marty” get to know each other. Although things start out pretty tense, they eventually charm each other – to the point where Minerva lies to the Seekers to save Martin from re-education, or “Re-Ed” (seriously, this society is creepy).

Their romance is swift, and before long, Finn the Ugly Baby is born. And, somehow, Martin seems like a competent, loving father! He’s a stay at home dad who is completely unfazed by Minerva’s immense success. But his past comes back to haunt him, and he is forced to flee with Finn. The rest, we already approximately knew: they were separated on the ocean, and Finn the Human came to Ooo.

Minerva is devastated, and all of Adventure Time’s audience is as well. The Mertens family had a shot at happiness – as happy as one can be in a society without true freedom, it should be said – and it was mostly bad luck that tore them apart. There is a two tiered tragedy to this tale beyond the obvious. The first being that much of this story Susan (and by extension, Minerva) couldn’t have been aware of– Minny never learned why her husband abandoned her. Then there’s the fact that Martin was a decent husband… but whatever remained of that parent was completely washed away by the time Finn met up with him years later.

But perhaps in the concluding two episodes of Adventure Time: Islands, Finn and his mother will be reunited once more.