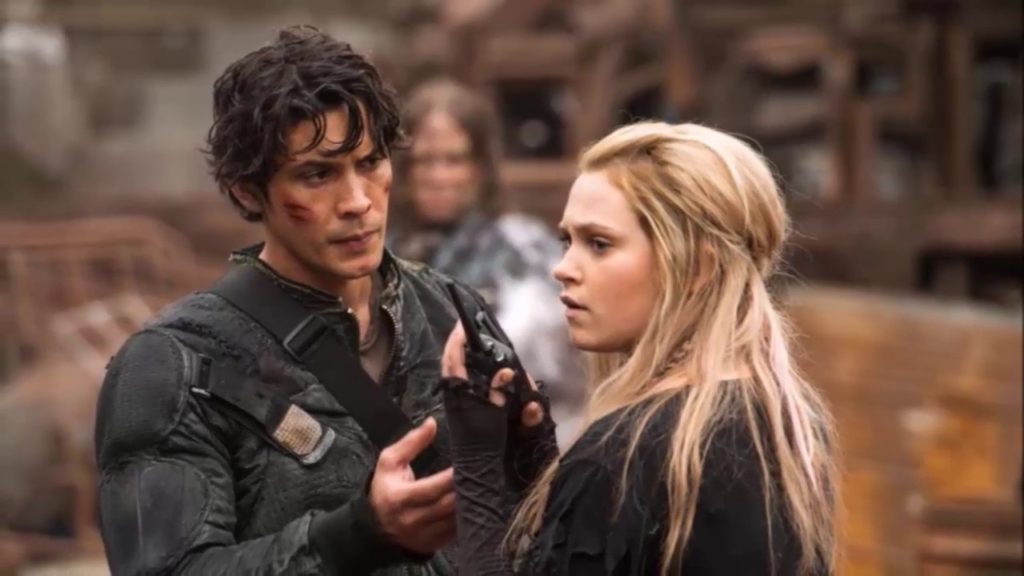 Take a break from the real apocalypse by watching a fictional apocalypse populated by much more attractive people. The 100 returns for season 4 with “Echoes”.

Trigger Warning: This episode dealt with suicidal themes, which are briefly touched on in this review.

“Echoes” picks up exactly where season 3 left off. Polis is dealing with the after affects of ALIE and the City of Light, people are grieving, and Clarke and Bellamy struggle with how much to reveal to people about that whole nuclear-power-plants-melting-down-inevitable-death thing. In the end, they make the decision not to let anyone know until they have a more clear idea of what they’re dealing with and how – if – they can fix it.

Unfortunately, they don’t have a lot of time. Ice Nation has taken over Polis and blames Clarke and the rest of Skaikru for what happened. Echo has named herself leader, even killing one of the Coalition ambassadors, until she learns that Roan somehow survived the insurrection. Clarke and Abby offer to help heal him, but the Ice Nation refuses. Still, Clarke knows that if Roan dies, Skaikru is doomed. After sneaking most of the Skaikru out of the city, they concoct a plan to sneak the Griffins in to see Roan by having Jaha take “Ontari” (really Octavia) to her people while Bellamy distracts Echo and the others.

It works, but after Roan learns of Ontari’s death (and is still a little miffed about that whole getting shot and almost dying thing), he isn’t willing to honor the promise he gave to Clarke. Echo almost persuades Roan to wipe out Skaikru and Trikru and present the Ice Nation’s generals with Clarke’s head. In order to sway Roan to her side, Clarke tells him about the radiation and offers him the Flame. Roan pronounces himself King and Keeper of the Flame to all assembled in Polis, until a new Commander can ascend. He also vows to honor Lexa’s Coalition, with Skaikru as the thirteenth clan.

Meanwhile in Arkadia, everyone reacts a little differently. Raven focuses on repairing the mainframe and later – after talking to Clarke and Bellamy – determining if ALIE’s claim about the radiation was correct. Monty and Harper have enthusiastic sex and a middling “define the relationship” conversation. Jasper tries to kill himself and is only stopped by Monty’s timely, unknowing intervention. Later, Raven confirms that ALIE was telling the truth about the radiation and the time frame of six months. There is no way to stop it.

The episode ends with the disturbing shot of a woman basically melting from radiation in Egypt. 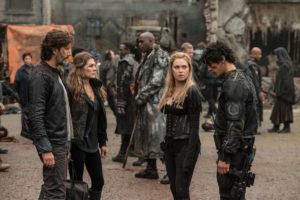 The 100 seems to have this pattern where even-numbered seasons start happy and odd-numbered seasons start right in the thick of things. With the six-month time frame, there isn’t a second to spare, so the action starts right away. In this sense, the show hasn’t slowed down, though the faster pace leaves some things left open.

For example, the episode begins with Octavia fleeing the tower after killing Pike; she’s distracted from her escape when she discovers Indra being taken down from her cross. Later, Bellamy suggests that everyone will understand why she did it, and that no one will blame her. Consequently, no one brings it up after that, probably because they have more important things to deal with. I have to wonder if this thread has been dropped completely, or if it will come back up later. We know that Octavia goes down a fairly dark path this season, and I suspect that she, at least, will feel the ramifications of her actions. I hope the rest of the Skaikru does as well; Pike wasn’t elected in a vacuum, and his mistakes are on all of them.

It looks as though the action will be split between Polis and Arkadia again this season, as Kane, Abby, Octavia, and Indra stayed behind to help Roan while Bellamy and Clarke return to Arkadia to deal with the radiation problem. I’m very much looking forward to Octavia’s storyline this season, which will hopefully keep me more invested in the Polis scenes than I was last season.

While Lexa didn’t make an appearance at all in the “previously on” sequence that preceded the episode, she was very much a presence throughout “Echoes”. Clarke and Bellamy stumble upon the empty shell of the man Lexa killed in the City of Light; Clarke’s teary confession of “I loved her” to her mother while they were captured; her brief moment of hesitation before handing Roan the Flame – her last tangible connection to Lexa. I read that last moment, when she gave the Flame to Roan, as one last goodbye to Lexa.

The decision to keep the knowledge about the radiation to themselves will surely come back to bite them later on; keeping secrets on this show has never worked out. It really only seems to serve the purpose of giving Clarke and Bellamy undue burden. Nonetheless, I’ll be sitting on pins and needles until a renewal is announced. After all, a second apocalypse would be a fitting end for The 100.

“Echoes” was a rather well-done premiere. It set up the season’s arc nicely as well as establishing the overall tone. With the other clans even more distrustful of Skaikru than ever, this would be a good opportunity for them to prove their worth by stopping their inevitable deaths with science.

What did you guys think of “Echoes”? Was there anything you were hoping to see? What do you predict will happen in season 4? Let us know in the comments!