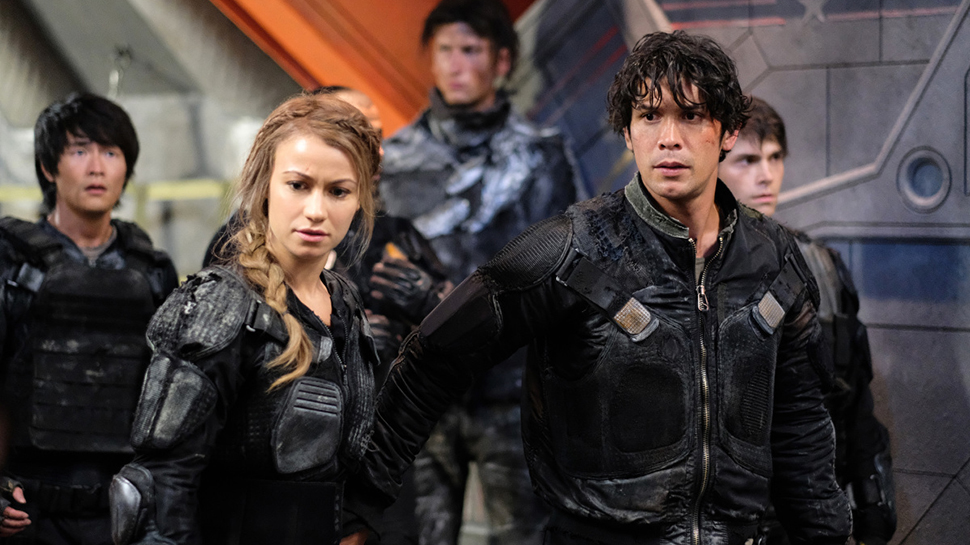 Here’s the long and the short of it: “Heavy Lies the Crown” was a loaded episode with some gilded moments.

Last week’s season premiere of The 100 picked up right where season three left off – everyone is in a dire situation and because it’s The 100, there’s also still a ton of infighting. In fact, “Heavy Lies the Crown” began with a very specific and honestly somewhat unnecessary scene about a Trishanakru boy who essentially killed his own family because of the chip. 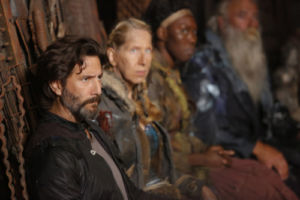 The thing is, “Heavy Lies the Crown” began in an unnatural way, and much of the episode continued in this sort of helter skelter manner that belied the fact that it handled some really tough material in what was likely the best way it could have. While I don’t believe that particular cold opening was necessary when it comes to the young man killing his family, I still enjoyed the inclusion of the blue butterfly, something that could (should?) be associated with [early] Octavia thanks to a scene in season one, episode two.

Again, though, this whole minor Trishanakru plotline seemed pretty unnecessary; at the very least, we didn’t need to see the one boy kill his family in order to understand that there would be people stepping up to Roan. I mean *come on* – if you’ve watched every previous episode of this show, or at the very least all of season three, it’s pretty obvious that all of these clans ever trusting and obeying each other is something that’s very, VERY unlikely.

(I mean, if they even get close, the producers/writers will just throw them a new challenge, like you know, surviving on a planet that’s about to be consumed by radiation several times stronger than even their bodies can stand.)

Yes, “Heavy Lies the Crown” certainly made some very good points…but sandwich those between a forceful interjection of the episode title (by Jaha, nonetheless), the fact that it turns out there are somehow twenty-five people who survived Farm Station, Raven actually using the term “crowdsourcing”, and the aforementioned useless Trishanakru farm boy story line…well, that’s a big sandwich that doesn’t really have much substance to back its grand ideas 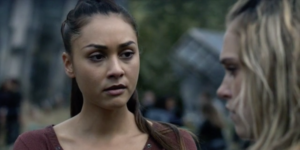 Don’t get me wrong, I didn’t hate this episode. For instance, as frustrating as it is that Bellamy is trying so hard to make up for his bad choices that he destroyed the hydro generator to save the 25 farm station people who were enslaved by Ice Nation, at least he made that choice – and it’s interesting that in doing so he brought the number 100 back into play, since without the hydro generator, Arkadia can only house 100 people. Additionally, seeing Jaha trying to help out (and making some decent points in his conversations with Raven and Clarke) was almost refreshing, much as I don’t care for the character. And of course Clarke had to make the tough decision about whether or not to tell everyone about the radiation; a decision that she DID make, in the end, though she still wasn’t completely honest with what she said – she gave a politician’s speech about how they’ll not just survive, but they’ll THRIVE…if, you know, they all work together. So Raven got her workers, Clarke appeased those who wanted everyone to know about the newest threat to their survival, and oh, meanwhile in Polis, Octavia has become a master assassin!

Now, whether or not Octavia killing the Trishanakru leader or Bellamy and co. taking out a bunch of Ice Nation people will come back to haunt them remains to be seen, but at the moment it appears that the radiation is still everyone’s biggest enemy and one that is likely to cloud the horizon for many episodes to come

What did you think of “Heavy Lies the Crown”? Was it a good follow up to the season premiere? Let us know in the comments!

Previous:The First Official Trailer For “Teen Titans: The Judas Contract” Is Here!
Next: Departures to Bring a Bunch of Geeky Fandoms Together and Then Make Them Cry