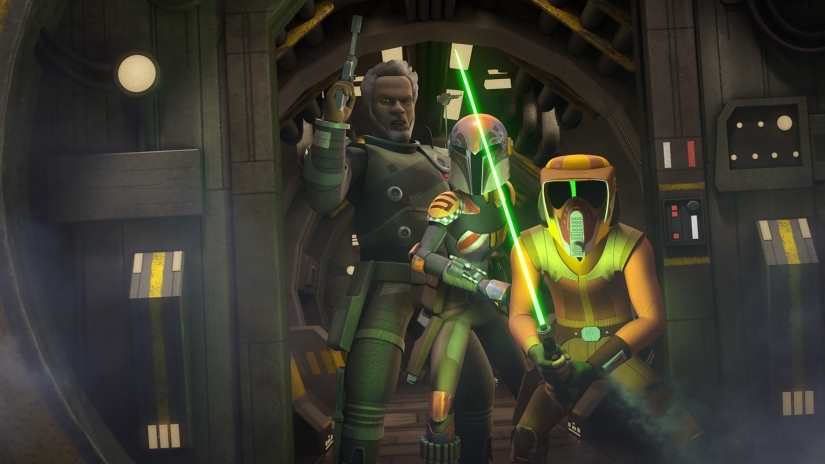 This week’s Star Wars Rebels installment, “In the Name of the Rebellion”, was another two-parter – an interesting decision, as airing so many back-to-back episodes means that season four has yet to feature any actual cliff hangers. It’s not the worst thing to ever happen, but I find myself wondering if it’s sustainable. 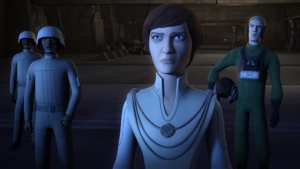 That said, at least “In the Name of the Rebellion” brought back some old faves – Zeb, mainly, though of course it was also awesome to see Mon Mothma again. I just wish all of the returning characters were such pleasant additions to these episodes, because Saw Gerrera was anything but. I mean, first he showed up as a giant projected head trying to convince members of the Rebellion that their course of action was useless, and yet somehow that was one of the least annoying things he did in these episodes. 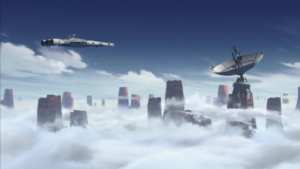 Granted, Saw did end up rescuing Ezra, Sabine, and Chopper from Jalindi Outpost…though of course he only showed up to destroy the relay, and if you ask me, he wouldn’t have saved them at all if he hadn’t seen something in it for him. Did Saw know that the Ghost wouldn’t be able to reach him fast enough to pick up Ezra, Sabine, and Chopper? Or am I merely projecting? Because it seemed like “In the Name of the Rebellion” was supposed to show that Saw isn’t one of the good guys, only, well, it didn’t really do a great job of showing the negative consequences of his actions.

Which brings me to the adventure on the freighter in part two. It was obvious from the moment they released the prisoners – who were all the exact type of techs needed for something like, oh I don’t know, the Death Star – that Saw was right about quite a few things. Granted, his decisions were not those of someone I’d call sane…he wanted to see the freighter through to its destination, but then he also insisted on destroying the giant kyber crystal they’d found, knowing that it would destroy the freighter and everyone on it as well…and while he ‘let’ Ezra and Sabine attempt to gather Chopper and the prisoners and escape, he certainly didn’t help them do so. 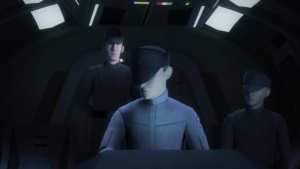 But we are only four episodes into season four, so of course they did escape…though sadly not in a working Empire shuttle. Instead, when the kyber crystal explosion shorted out their shuttle’s electrical system, Hera and the Ghost swooped in to save the day as usual, which made for an ending that was so neat and tidy it was basically wrapped up and tied with a nice little bow. (Especially considering the amount of destruction the Empire suffered, including that of the freighter and all of its Death-Star-bound contents.)

To be honest, the gentle endings of these two-part episodes leave me wondering if perhaps the season – and therefore the show as a whole – will end on a much more depressing note than I originally would have thought. Granted, we know it can’t have a truly happy ending – it is a prequel to Episode IV, after all – but I’m becoming more and more concerned about the fate of my beloved Hera and Chopper.

Yes, that’s right, I enjoy the whole Star Wars Rebels crew, but Hera and Chopper hold special places in my heart. And speaking of Chopper, as usual he stole the show in “In the Name of the Rebellion”. BB-8 is great, y’all, but Chopper is a badass war veteran after my own heart.

But hey, at least we know he made a cameo in Rogue One (along with the Ghost and a shout out to ‘General Syndulla’). Between that. and Dave Filoni leaving Ahsoka’s fate a mystery, the Star Wars Rebels ending can’t be all that bad…can it? Cross your fingers with me and let us know your thoughts in the comments!