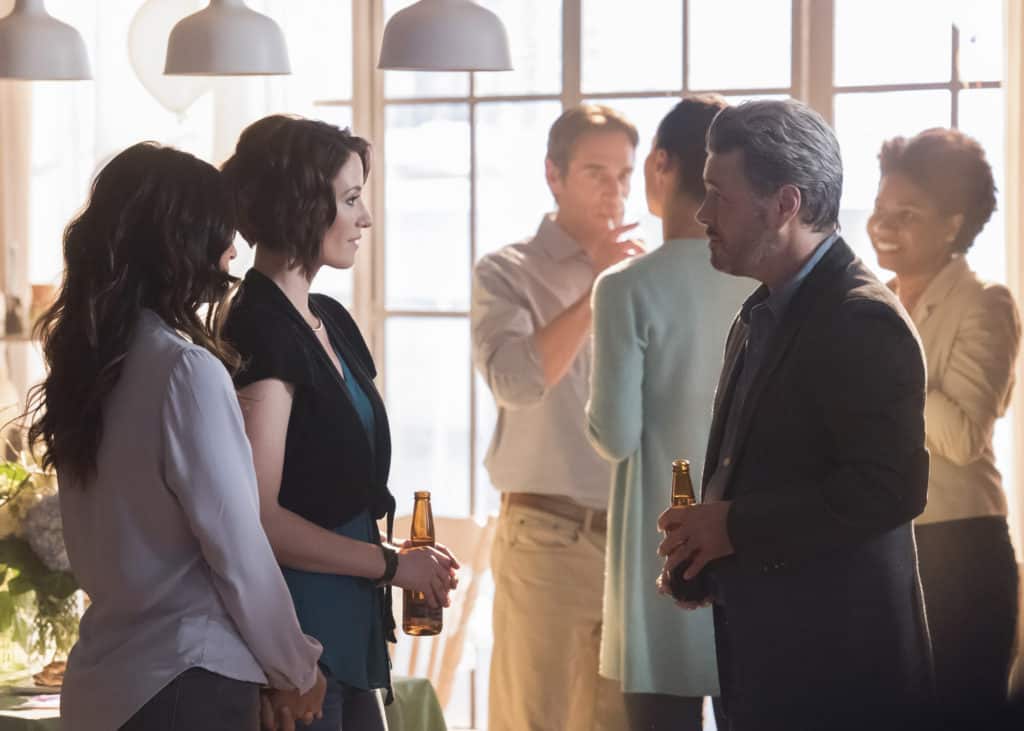 “Far From the Tree” is an episode that deals primarily with family, tossing in some heavy drama for our characters to deal with. Both Maggie and J’onn face some serious emotional trials this week.

Alex and Maggie’s wedding is getting ever closer. In “Far From the Tree”, Eliza throws the couple a wedding shower, and when she laments that there are no childhood pictures of Maggie for the picture board, Maggie relays her sad tale of being cast out of her home at age 14 for being gay. Though she has no fond memories of her mother, she seems to be torn on the subject of her father. Alex tries to convince her to invite her family to the shower. I understand what Alex is trying to do here, but family issues are something that should not be pressed. Yes, occasionally time heals wounds, and people can change. But, as someone from a fairly loving and relatively well-adjusted family, I do not try to butt in to friends’ family problems. I won’t ever truly understand, and it’s not a crime to want to keep potentially toxic relationships out of your life.

However, Maggie takes Alex’s advice and calls her father, inviting him to the shower. He comes, and they talk. He surprises her by revealing that he has followed all of her cases, and they have a moment when she tells him that she solved a particularly difficult case by remembering a piece of advice he’d given her once. This scene had me convinced that “Far From the Tree” would have the two reconcile. But when he arrives at the shower, even though he took an old photo of Maggie out of his wallet to add to the picture board, he is unable to deal with the reality of his daughter being a lesbian.

Their ensuing argument is probably one of the more emotional scenes I’ve witnessed on Supergirl, particularly from Maggie, who tends to be more stoic than the other characters. Her father describes the prejudice he faced when he first came to America, and how the last thing he wanted was for her to face that kind of treatment. He tells her that she is free to live her life however she wants, but he doesn’t want to have to see it. As heartbreaking as this scene was, there is some solid political commentary in her father’s speech, including a reference to our current president and his opinion on Mexicans. Later, Maggie confronts him, saying that she doesn’t need his approval and that she is surrounded by people who love her for who she is. In the end, she is grateful for the opportunity to have closure, so that she can finally move past her painful childhood.

As nice as it would have been for “Far From the Tree” to show Maggie’s father accepting her, I think it gave LGBTQ+ youth a more hopeful message — namely, that one day you will find people who do support you and love you. 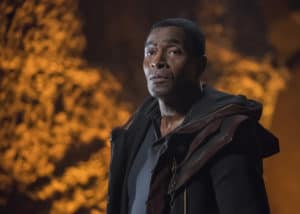 In the A plot in “Far From the Tree”, J’onn and Kara travel to Mars after M’Gann’s urgent message. There, J’onn discovers that his father is actually alive, and has been a captive of the White Martians for hundreds of years. Myr’nn is a religious leader, and apparently even the White Martians refuse to kill a religious leader. (Torture is okay, though.) Myr’nn is vital to the resistance because of his knowledge of religious artifacts, most notably the Staff of K’lar. The staff is a psychic weapon which would give the White Martians the ability to track down and destroy the resistance. J’onn is tasked with getting the staff’s location from his father.

Sadly, Myr’nn does not believe that J’onn is who he says he is, convinced that his son would have never fled Mars. J’onn is gutted by the knowledge that his father thinks him to be a coward. All of his attempts to convince his father meet with resistance. Myr’nn thinks that it’s another trick by the White Martians to break him. Fed up with the lack of progress, some of the members of the resistance seek to force themselves in Myr’nn’s mind. Kara and J’onn help Myr’nn escape, and J’onn takes them to their home, which is still remarkably in tact considering it’s been several hundred years. Myr’nn is devastated by what he considers to be a cruel White Martian trick, but Kara is able to get through to him long enough to convince him to listen to J’onn. The two link minds and share a particularly happy memory, wherein Myr’nn came home early to surprise J’onn for his birthday. The two embrace. When the resistance catches up to them, Myr’nn tells them where the White Martians were taking the staff. 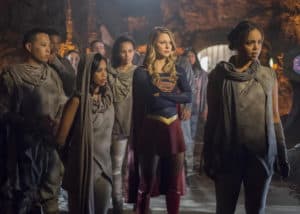 The battle for the staff is quick and brutal. Kara is thrown around quite a bit but is finally able to grab the staff; whether accidentally or on purpose, she uses the staff to disintegrate a couple of White Martians. When the battle is over, she hands the staff over to the resistance, but they decide that it is simply too powerful of a weapon to be trusted to any side. They ask Kara and J’onn to take it to Earth and bury it so that it cannot be used by them; they must be better than their enemies. I really felt like “Far From the Tree” made an excellent point; sometimes, you are going to have to fight for what you believe in, but you should never compromise your morals. The resistance were willing to fight to keep the staff out of the White Martians’ hands, but they didn’t want to use the staff themselves.

In the end, M’Gann elects to stay on Mars and continue the fight, while Myr’nn comes with his son to Earth.

Have you guys watched “Far From the Tree”? What did you think? 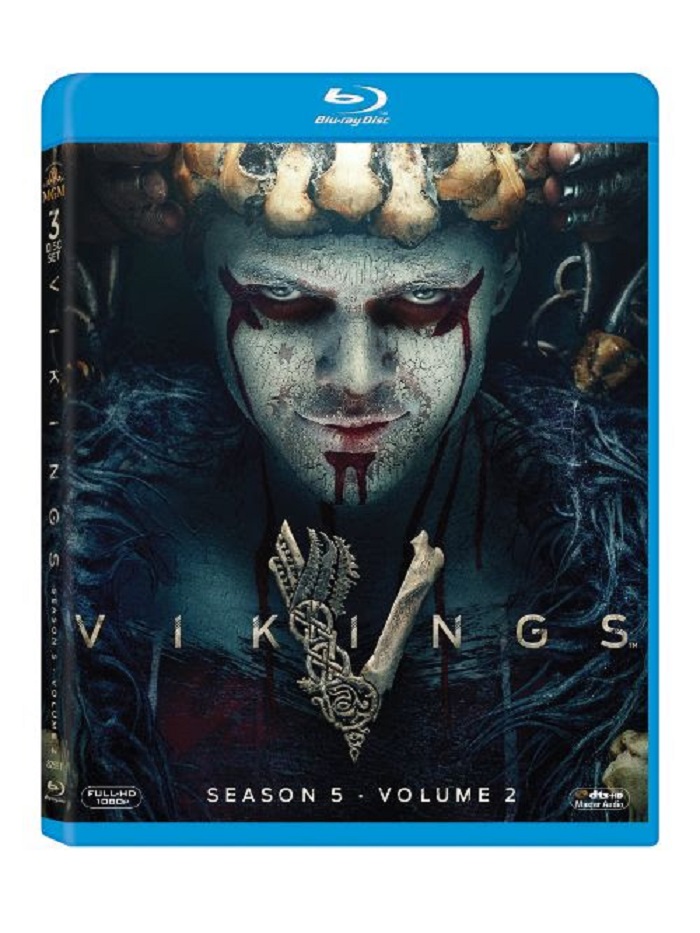 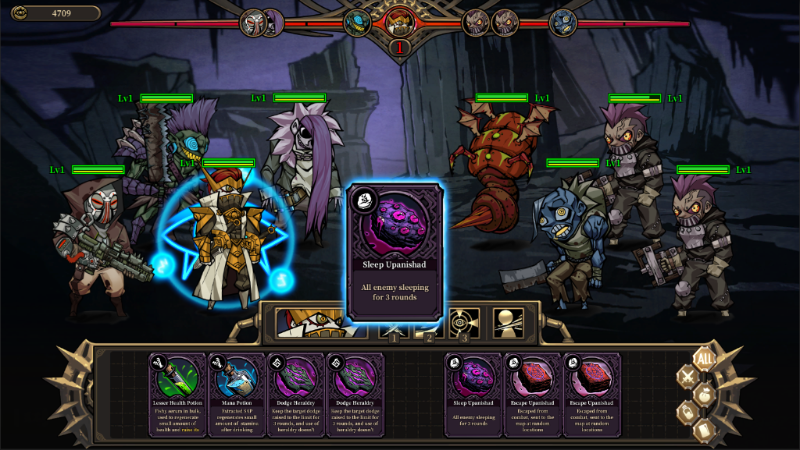