An Intro to Syfy’s ‘Van Helsing’ from SDCC 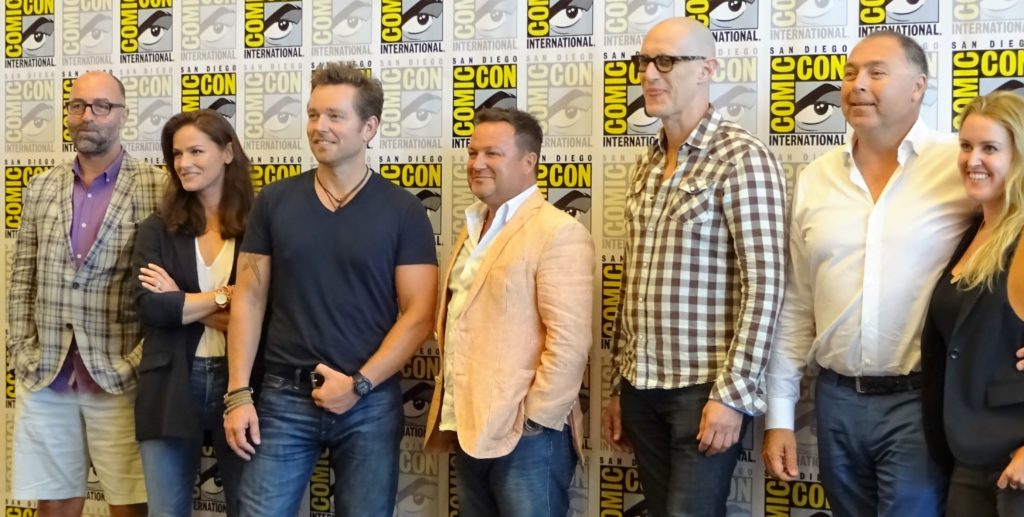 I love it when new shows debut, especially when they happen on one of my favorite networks, Syfy. Yesterday at San Diego Comic-Con, I was able to attend the official first panel and press roundtable event for Van Helsing, a new show set to premiere on September 23 on Syfy. Read on to learn about how the show will redefine how you see the vampire mythology and why you should definitely check out this groundbreaking series.

I know what you’re probably thinking: another incarnation of one of Dracula‘s most famous characters? What does this have to offer to set it apart? For starters, you’ll notice that it is actually centered around Vanessa, a mother in the midst of a vampire apocalypse. Vampires have been around for centuries, but once an environmental event shuts out most of the sun’s rays, the vampires have free reign to wander the earth at all hours of the day. Of course, this leads to an uprising, and now the vampires outnumber humans and treat them like livestock. Vanessa has some special powers that turn the vampire universe on its head: her bite can turn vampires back into humans.

The series was set into motion by showrunner Neil LaBute (Hell on Wheels) whose unique vision turned the heads of fellow executive producer Simon Barry (Continuum) and Nomadic Pictures. Together they worked with Dynamic Television (Wynonna Earp) to distribute with Syfy. This new series fits easily into Syfy’s conscious decision to have more representation by women in genre with their commitment to featuring programming with strong female leads. Vanessa, however, is not the stereotypical female badass that viewers might be expecting. Instead, she is a bit of a reluctant heroine; thrust into the role by her strange abilities and trying to reunite with her estranged daughter. She is clearly a bit more vulnerable than the stereotype would suggest.

The role of Vanessa is be 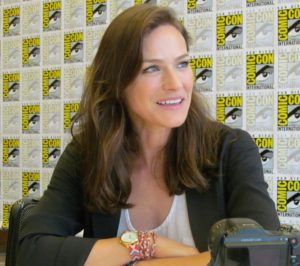 ing played by Kelly Overton (True Blood), and she seems to be an excellent fit for the role. In the few scenes and sneak peeks we were able to see during the panel, the role is decidedly physical and seems to take a lot of strength, something that Overton says she was prepared for. “I grew up an athlete: soccer, basketball, so I come from a really athletic background. So it is just something that I enjoy doing and have continued doing throughout my life, and I’ve played a bunch of roles in the past that incorporated that athleticism and fight sequences, so it’s just something that’s just kind of continued to be part of my career.”

Another very interesting aspect of the show’s cast is the role of Sam played by Christopher Heyerdahl (Hell on Wheels). His role and relationship with Vanessa are unclear at this point, but it is interesting to note that his character is deaf. Heyerdahl is not deaf, so I asked him about the challenges of playing a deaf character and how he prepared for the role. “Sign language is very complex, very subtle. There are a thousand and one dialects. And the fact that most people who are deaf, they have hearing parents, and most of those hearing parents don’t learn ASL, so they’re on their own until they hook up with other people who are speaking. Then they’re able to share their way of speaking, and they’re creating language as they go as well as following along with a very distinct and structured language.” Needless to say, it took a lot of a preparation, but a process that he calls “fascinating”.

The final castmember that we met was Jonathan Scarfe (Hell on Wheels) who plays Axel. From the sneak peeks, it is clear that he partners up with Vanessa early in the series, but we don’t yet know what their relationship is. We can tell that Axel is likely some sort of ex-military or something, though, because he always seems to have a rifle in his hands, and he helps keep Vanessa safe from the vampires.

Another cool twist to the vampire mythology within Van Hels 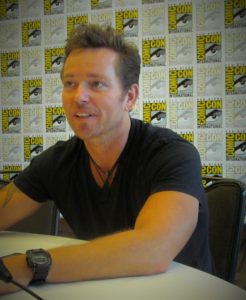 ing is the political system of the vampires themselves. Since vampires have been around for centuries in this universe, there are elites (those who have human blood readily available) and they go all the way down to ferals who are scavengers and have to rely on the blood of animals. According to the producers, the type of vampire depends on their food – you are what you eat. From the glimpses that we saw of the vampires, they are a bit terrifying (at least the ferals). They reminded me more of zombies in that they suffer from some sort of infection rather than having a supernatural element. Going along with that, these vampires are not immortal; they can die from injury just like any human. It will be quite interesting to see how it all plays out.

After attending these events, I am excited to see what Van Helsing has in store. There are enough twists in what we think we know about vampires that it is super interesting, and the fact that the producers are committed to portraying underrepresented groups gives me a lot of hope.

Van Helsing season one will have 13 episodes that will air on Syfy starting September 23, but you can catch a commercial-free screening of the pilot on Syfy following the world premiere of Sharknado: The Fourth Awakens on July 31.