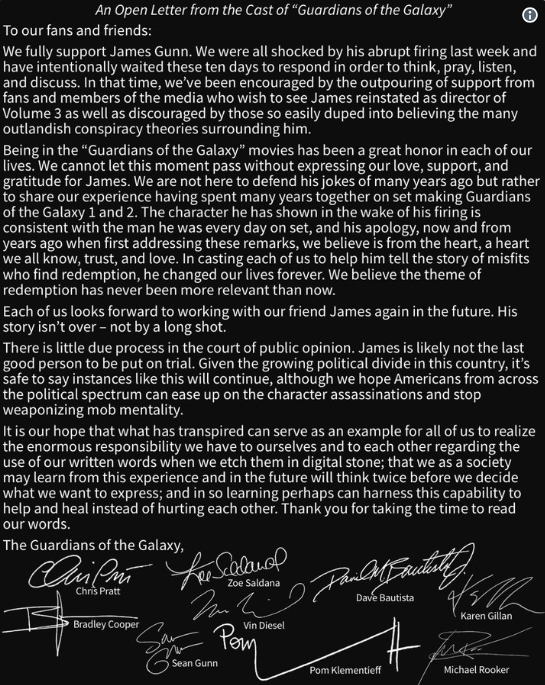 The MCU fandom is still talking about the James Gunn situation and what it means for Guardians of the Galaxy Vol. 3. Now, the GotG cast has come forward with an open letter supporting Gunn. Will Disney listen to the fans and hired talent? Will the House of Mouse bring back Gunn?

Disney found itself in a tough situation when tweets, ranging as far back as 2009, by James Gunn resurfaced. The tweets were definitely horrendous and didn’t gel well with the family-friendly vibe Disney continues hard to keep. That’s why I understand the studio’s decision to fire James Gunn even though he apologized for his tweets.

While Dave Bautista was vocally disappointed when the firing happened, the rest of his fellow GotG cast members have now come together to release an open letter in support of their director. 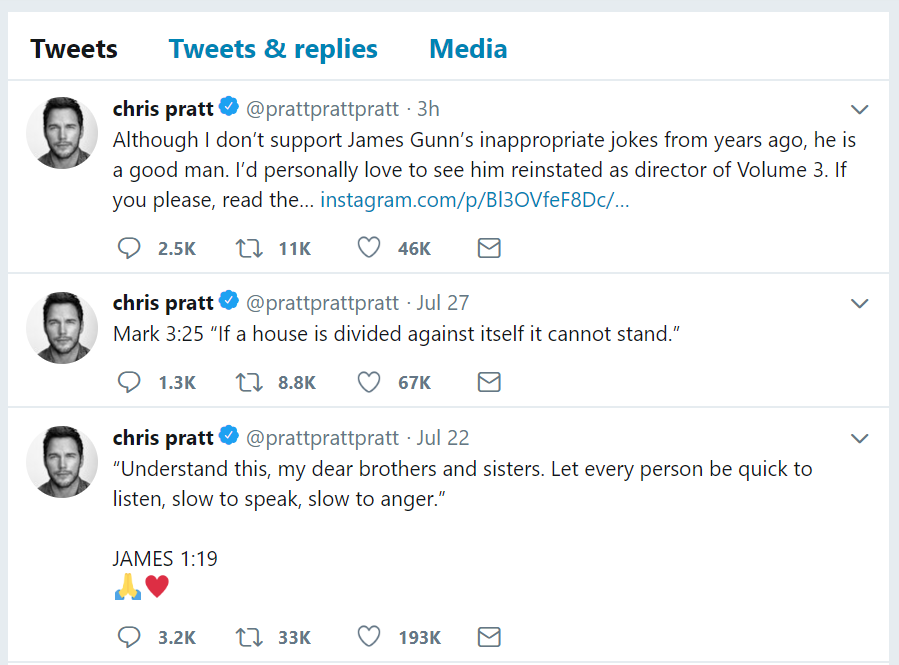 To our fans and friends:

We fully support James Gunn. We were all shocked by his abrupt firing last week and have intentionally waited these ten days to respond in order to think, pray, listen, and discuss. In that time, we’ve been encouraged by the outpouring of support from fans and members of the media who wish to see James reinstated as director of Volume 3 as well as discouraged by those so easily duped into believing the many outlandish conspiracy theories surrounding him..

Being in the “Guardians of the Galaxy” movies has been a great honor in each of our lives. We cannot let this moment pass without expressing our love, support, and gratitude for James. We are not here to defend his jokes of many years ago but rather to share our experience having spent many years together on set making Guardians of the Galaxy 1 and 2. The character he has shown in the wake of his firing is consistent with the man he was every day on set, and his apology, now and from years ago when first addressing these remarks, we believe is from the heart, a heart we all know, trust, and love. In casting each of us to help him tell the story of misfits who find redemption, he changed our lives forever. We believe the theme of redemption has never been more relevant than now.

Each of us looks forward to working with our friend James again in the future. His story isn’t over — not by a long shot.

There is little due process in the court of public opinion. James is likely not the last good person to be put on trial. Given the growing political divide in this country, it’s safe to say instances like this will continue, although we hope Americans from across the political spectrum can ease up on the character assassinations and stop weaponizing mob mentality.

It is our hope that what has transpired can serve as an example for all of us to realize the enormous responsibility we have to ourselves and to each other regarding the use of our written words when we etch them in digital stone; that we as a society may learn from this experience and in the future will think twice before we decide what we want to express; and in so learning perhaps can harness this capability to help and heal instead of hurting each other. Thank you for taking the time to read our words.

The Guardians of the Galaxy

Everyone is waiting to see what Disney will do. As a family-oriented business, not firing Gunn would have spelled a guaranteed PR disaster as GotG Vol. 3 neared its rumored 2020 release date. Every media outlet was bound to ask Gunn about his tweets and the political agenda surrounding their resurfacing. Consequently, rehiring Gunn now is going to lead to a similar outcome during press tours.

The fact the GotG cast has decided not be stay quiet might spell doom for the third installment in the series. The mastermind behind the MCU, Kevin Feige has remained silent. Of course, he doesn’t want any controversy taking the spotlight away from Captain Marvel and Avengers 4. That’s why I think the GotG cast risk not having Vol. 3 made at all if they continue bringing up Gunn’s situation.

And with the shareholder-approved Disney-Fox merger giving Feige all of the X-Men and the Fantastic Four to play with, making a third GotG film might not be a priority in the coming months.

I understand the cast wanting to support Gunn. However, Disney is a business and running a business, especially a family-friendly one, is tricky. The fact Gunn’s tweets involved pedophilia only makes the current situation worse.

I am sure someone as talented as Gunn will be able to make a comeback in Hollywood. He already has a lot of supporters being vocal about forgiving him. What I don’t see is Gunn working on GotG Vol. 3 for Disney. Currently, attaching him to any Disney project is a PR nightmare waiting to happen. Let’s see if the cast continuing to be supportive of Gunn costs them a third film in the GotG series.

Also, whether you agree with her content or not, film critic Grace Randolph has an interesting take on how Gunn’s supporters can help him right now instead of going after Disney.

Will Disney rehire James Gunn? Should they rehire him? Feel free to share your thoughts with us. 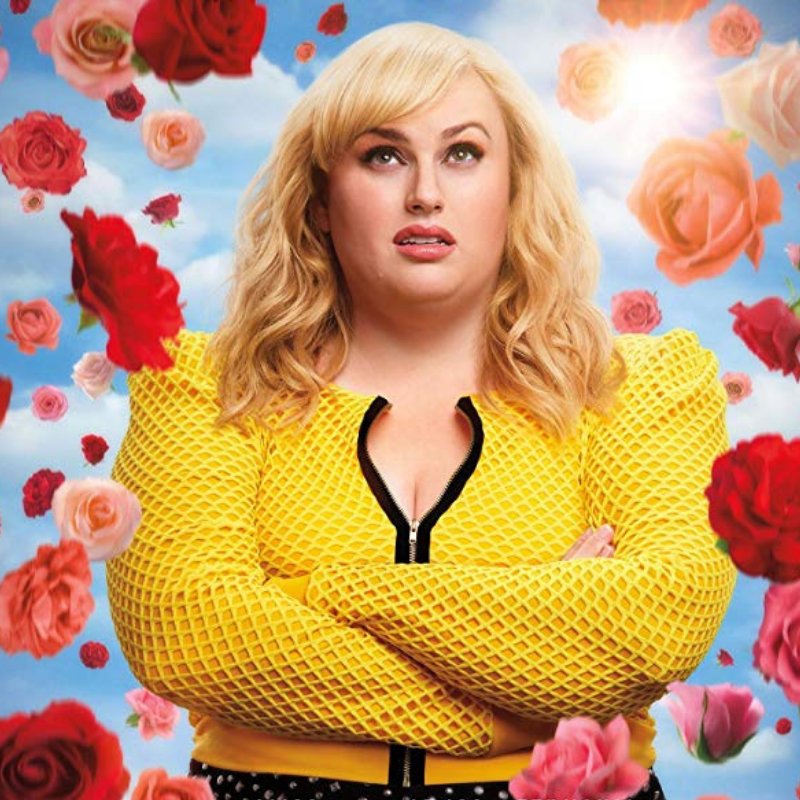 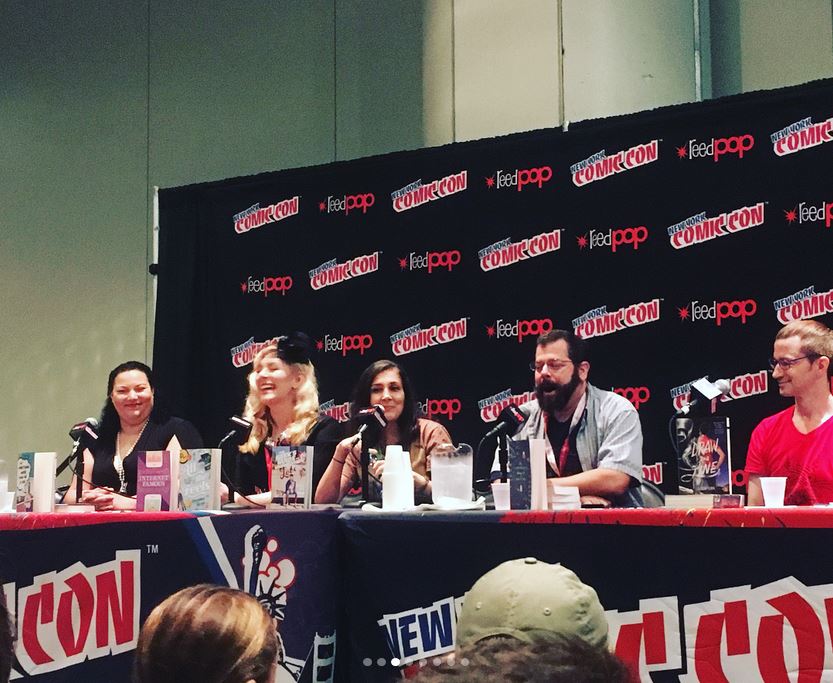