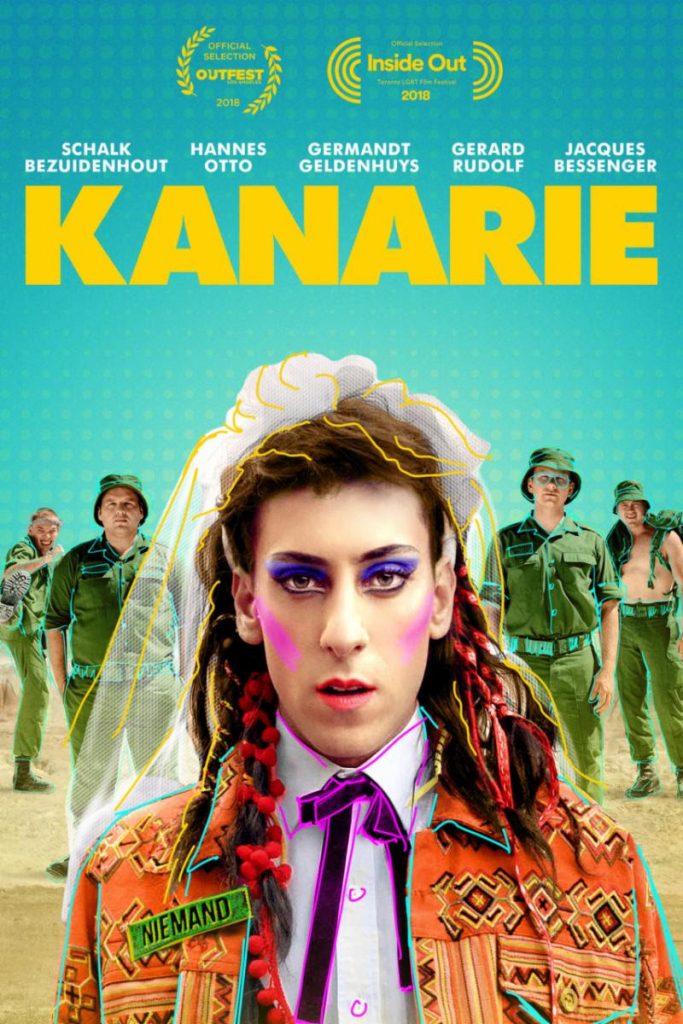 Kanarie can be described as a thought-provoking musical which tells the journey of a young man trying to make sense of his sexuality during the 1980s while drafted during Apartheid by the South African Army. I greatly enjoyed watching it. Breaking Glass Pictures will be making this film available on DVD and VOD come June 18, 2019.

I was provided a free review screener of Kanarie. The opinions are my own.

I’m going to begin by saying that Kanarie is a queer film with a happy ending. So, you should decide to check it out for that alone. I’m not saying every LGBTQIA+ movie needs to end on a happy note, but I do appreciate the titles that aren’t all gloom and doom.

Drafted during apartheid by the South African Army, Johan Niemand’s love for Boy George and Depeche Mode lands him a spot in the SADF Choir called the ‘Canaries’. Against a landscape where law and religion oppress individuality, Johan and the Canaries have to survive military training and go on a nationwide tour of the country, entertaining people whilst fortifying the belief in the military effort and promoting the cause of both Church and State. An unexpected romance on the battlefield forces Johan to reckon with his long-repressed sexual identity. Examining the effects of nationalism on the soul, while also exploring the tender brotherhood among misfits, this musical comedy revels in the discovery of finding your voice and learning to fly.

Kanarie is the type of film which takes its time to build the relationships between the characters. You will feel yourself slowly growing invested in Johan’s group of friends. So, kudos to director Christiaan Olwagen and Co-Writer (and Musical Director) Charl-Johan Lindenfelder.

The film opens up with Johan (Schalk Bezuidenhout) walking on the road in a wedding dress. You immediately get a sense of who he is as a character. He’s obsessed with Boy George and other musicians of his time who refuse to be shoved into a box (think Grace Jones, Cyndi Lauper, etc). Music lets Johan feel free.

Things change when he is drafted into the SADF. His musical talents allow him to be part of the Canaries. There, Johan makes a bunch of friends and strikes up a romance with a fellow Canary named Wolfgang (Hannes Otto).

As the story progresses we see Johan trying to accept who he is inside. The scene where Johan struggles to come out to his sister is incredibly well-acted. Kanarie is Bezuidenhout’s film. It’s a treat to see him display a range of emotions throughout the running time. It isn’t an easy journey for Johan, but it is a hopeful one.

Also, shoutout to actor Germandt Geldenhuys. He knows how to steal attention whenever he’s onscreen as Ludolf.

Due to the film set during the Apartheid, it does talk a bit about war, politics, and religion. However, the movie left me wanting to know more about the numerous colored activists during that time. I also wanted to see a story about a queer POC from that time. Maybe one day I will.

Anyway, having said that, I do recommend you watch Kanarie. It’s a well-constructed film with strong performances across the board.

Previous:Hunger Games Prequel in the Works from Suzanne Collins
Next: Fourth Season of Shokugeki no Soma Anime Confirmed