“Kingsman: The Secret Service” Is a Bloody Good Time 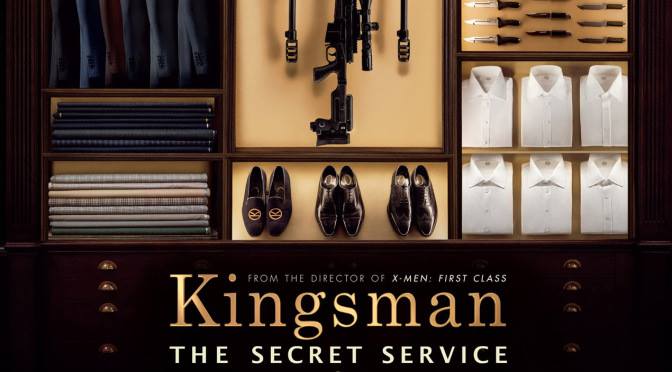 Looking for a movie to see this Valentine’s Day that doesn’t revolve around relationships? Consider seeing Kingsman: The Secret Service, which opens today and stars Colin Firth and Taron Egerton – plus a whole host of other British celebs. Kingsman, based on a 2012 comic called The Secret Service, follows the story of Eggsy (Egerton) as he is groomed to join an elite squad of secret agents in order to stop Valentine (Samuel L. Jackson), an eccentric billionaire with nefarious plans. You won’t find much romance in Kingsman, but you will find a lot of top-notch action sequences and some beautifully choreographed fight scenes.

Here’s what you need to know about Kingsman: The Secret Service: it was produced by the same guy who produced Kickass (Matthew Vaughn), which should tell you everything you need to know right there. If you were like me, (who went into Kickass not realizing how violent it was going to be [and that maybe affected your opinion of it]), know in advance that Kingsman is the same way. When I say it’s a “bloody” good time, I mean that both literally and figuratively. I didn’t know much about Kingsman when I went to an advance screening, but I figured that anything with Colin Firth in it would be gentlemanly and charming…so I was not expecting someone to get chopped in half (down the middle, not across the middle) within the first ten minutes.

That said, this movie is entertaining as hell. It’s violent, but it’s that kind of over-the-top violence that makes you cheer (if you’re into that sort of thing). There is a massive fight scene about two-thirds of the way through the movie that I watched literally with my jaw hanging open. It’s funny, with enough of a mystery to keep you guessing. Eggsy’s suit fitting is full of the kind of high-tech toys that would make James Bond wet himself with envy. It’s a secret agent movie that isn’t afraid to be silly, and I loved every fantastic second of it.

One surprising thing about Kingsman is its female characters (barring one scene near the end which was largely unnecessary). There are few – as the title implies, Kingsman agents are mostly male – but the film does pass the Bechdel test, albeit barely.

In fact, Eggsy’s main competition for the coveted role as Kingsman is Roxy (Sophie Cookson), and no one ever dares suggest that Roxy is not capable because of her gender. It isn’t even mentioned. The doubt is reserved instead for Eggsy, who doesn’t have the same background (as in, wealthy) of the other contenders. Roxy is the only one who does not judge Eggsy for his humble upbringing, and the two become friends during training. They work well together and form a fantastic pair, and shockingly, it is a completely platonic one.

And then there’s Gazelle (Sofia Boutella) – Valentine’s top assassin, a double-amputee whose legs are blades used to cut down everything and everyone in her way. Gazelle is also Valentine’s sole confidante and advisor.

Both Roxy and Gazelle exist as their own characters. Neither of them function as someone’s love interest. They are there to kick ass, take names, and look fabulous while doing so. That was probably my favorite thing about this movie.

If you’re not one for violence, avoid this film. But if you’re suffering from Valentine’s Day fatigue and you’d much rather watch people get blown up, then you should definitely check out Kingsman. You get to watch attractive British men in suits fight people using bulletproof umbrellas! I can think of worse ways to spend two hours and $13 (or whatever the cost of a movie ticket is in your neck of the woods).