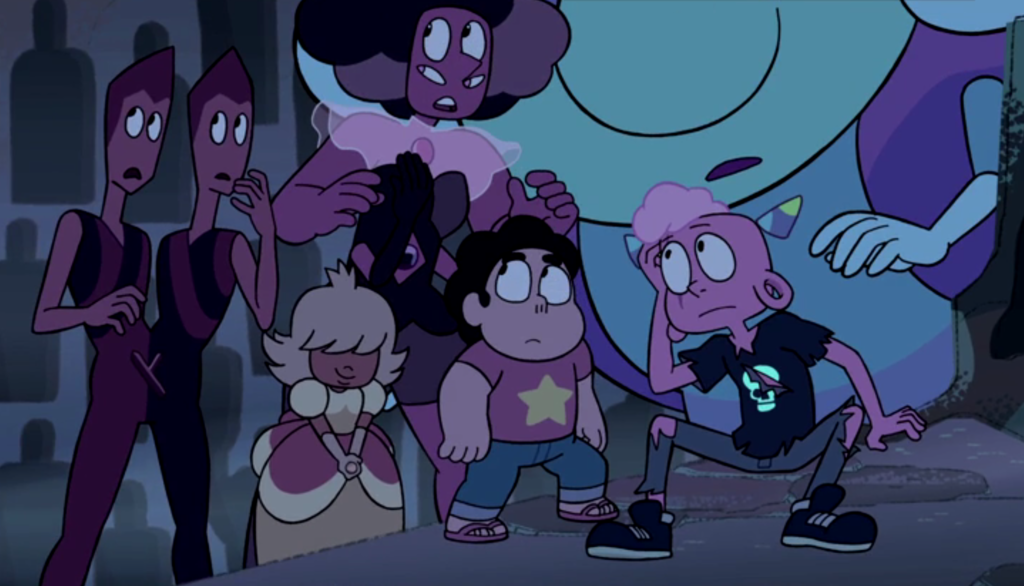 There’s no getting around the fact that Steven Universe: Wanted featured some heavy episodes, but what we learned in “Lars’ Head” was – in my opinion, at least – one of the most important revelations in a while.

At the end of the previous episode, “Off Colors”, Lars essentially sacrificed himself to save the titular ‘Off Color’ gems who had been hiding underground on Homeworld, but his sacrifice was pretty short-lived thanks to Steven’s tears bringing him back to life. “Lars’ Head” picked up right where things left off, and Steven being Steven, the first thing he did was apologize for bringing Lars back to life without permission.

Of course, Lars being Lars, he didn’t seem too happy with the fact that he’s now pink, although other than that he couldn’t quite place how he felt – not sore, not tired, not good, not bad – and even when he settled on ‘freaked out’ he didn’t seem too sure of things. And who can blame him? It was pretty clear at this point that Steven hadn’t expected to be able to ‘heal’ anyone to such a degree, and therefore didn’t quite know how to handle the situation himself.

Unfortunately, they didn’t have time to figure anything out before the Robonoids reappeared, and then before they could decide what to do about the Robonoids, Lars started to come unglued over the idea that he might be a zombie. It was both frustrating and amusing that Lars interrupted Steven and the Off Colors’ attempts to make plans, because he clearly wasn’t a zombie (even if his heartbeat was very, very slow)…although in the end this led to Steven pointing out that even Lars’ hair was different, and when he touched it, it lit up! 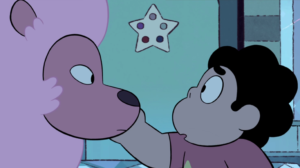 Of course my first thought was OMG WE’VE SEEN THIS BEFORE! Not only that, we’ve seen it with one of my favorite SU characters – Lion! And so Steven went into Lars’ Head (or rather, hair) just like he goes into Lion’s, and inside was “Rose’s place”…only now there is a new hill and a new tree for Steven/Lars! And yes, I realize I’m using a lot of exclamation points here but Lion’s origin has been one of the biggest/most important mysteries in Steven Universe (at least to me), so it’s hard to contain my excitement over finally knowing what Lion is and (for the most part) where he came from.

Going through Lars’ head allowed Steven to get back home, where he guzzled water and scarfed down food before packing a lunch for Lars and heading back to Homeworld via this Lion-to-Lars portal. As it turned out, Lars wasn’t hungry – and considering the fact that Lion eats lizards sometimes and also enjoys certain human foods, but that it’s never seemed as if he *had* to eat, Lars is obviously in the same boat. Little reveals like this are such great additions to lore-heavy episodes like “Lars’ Head”; sadly, this week’s bomb wasn’t going to end on an entirely happy/upbeat note. I loved the idea of Steven bringing the Off Colors back home with him, but it wasn’t meant to be, because there was no way to get Lars back, and of course the Off Colors were far too kind to leave him on Homeworld to fend for himself. 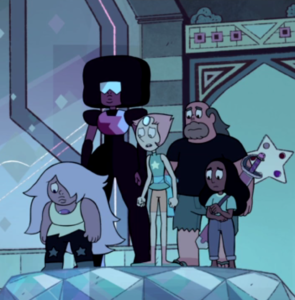 So “Lars’ Head” had a bittersweet ending, with Steven getting to return to his loved ones (who had obviously spent their time trying to figure out a way to get to Homeworld and save him) and Lars remaining in the caverns with the Off Colors – because after all, ‘us Off Colors have to stick together”. Thankfully Steven isn’t the type to sit around while his friends are in danger, so it’s likely that the new big SU arc will feature the Crystal Gems trying to figure out how to bring Lars home. Let’s just say that I for one am really excited to see what happens next!