Steven Universe: Wanted… and hunted! By killer robonoids! Thus, Steven and Lars go into hiding deep in Homeworld’s underbelly, where they meet four (or five, or eleven) Gems ostracized by society for being “Off Colors.”

“Off Colors” follows the direct aftermath of “The Trial,” right after Blue Diamond’s Palanquin has plummeted to the ground. Steven and Lars emerge from the rubble unharmed (thanks to Steven’s bubble) and find themselves in what looks like the abandoned underbelly of Homeworld. We don’t know how long they’ve been away from Earth at this point, but it must have been a couple of days. Lars is very hungry– a fact that’s been brought up quite a number of times, and will probably be a plot point later on.

Robonoids find them and attack with lethal force. Lars freaks out about this, and everything else that’s been happening so far. He’s tired and he’s scared and he’s tired of being scared all the time.

“Don’t beat yourself up like that, Lars,” Steven quips. “That’s what the killer robots are for.”

They’re saved when someone beckons at them from a hole underground, and then leads them to “somewhere long forgotten… where only those who don’t belong, belong.”

They find themselves in a vast Kindergarten that puts the Prime Kindergarten on Earth to shame. There, they meet other Gems who are also hiding from the Robonoids:

The “Off Colors” from left to right: the Rutile twins, Rhodonite, Padparadscha, and Fluorite

Whether it’s because of choices they’ve made (like fusion) or how they were made (like the crystal twinning in the Rutiles), all of them are outcasts, ostracized by a society that has deemed them “off colors”– not having standard qualities, not socially acceptable, wrong. But there’s nothing “wrong” with any of them– they’re just different. And yet for that, Homeworld has judged them unworthy to live, not just in society, but unworthy to live at all.

“So you’ve been hiding your whole lives…” Lars realizes. 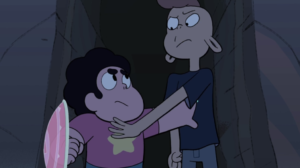 Steven to Lars: “It’s okay to be afraid.”

Unfortunately, while they were having their little chat, the killer robonoids find them. Everyone scrambles to hide. Lars seems like he’s about to have another panic attack, but Steven puts a hand on Lars’s chest (and what a lovely callback it is to “Lars and The Cool Kids”), assuring him, “It’s okay to be afraid.”

The robonoids have the Rutile twins cornered, and will definitely shatter their gem. But Lars, who doesn’t have a gem and is essentially invisible to the robonoids’ scanners, attacks the killer robots to save them, all while telling himself, “It’s okay to be afraid.”

Just two episodes ago, Lars couldn’t even muster the energy to lasso the gem destabilizers with Steven’s pants. But since then, he’s grown to be more open about his feelings– about how afraid he’s been throughout his whole life. He’s learned that Steven, who always seemed to have it together in Lars’s eyes, also feels afraid but still pushes through despite that. And at this point, Lars realizes just how high the stakes are, that every action he takes (or doesn’t take) has consequences– not just for himself and his own life, but for the lives of those around him.

And so, he acts. He fights despite his fears, and this brings to mind several famous quotes such as these:

“Courage is not the absence of fear but rather the judgement that something is more important than fear; The brave may not live forever but the cautious do not live at all.” — Meg Cabot

“Courage is being scared to death, but saddling up anyway.”– John Wayne

During the fight, the last of the robonoids exploded while Lars was on it, throwing him high in the air, his body hitting a nearby column before falling to the ground. He’s not moving. Steven checks on him as the “off colors” crowd around, praising Lars’s bravery, but…

Steven looks heartbroken and starts crying, his tears spilling out and dripping on Lars’s lifeless body. But then, Steven’s tears seem to have some kind of magic because the body starts glowing and Lars wakes up (and can I just say, the scar across his right eye looks so badass).

“Oh my! Something incredible is going to happen to Lars!” says Padparadscha, predicting what’s already happened. 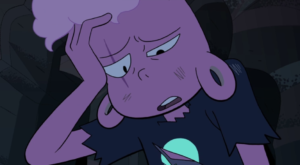 Padparadscha: “Something incredible is going to happen to Lars!”

And indeed, he’s changed so much– from “running away when his long-time workmate and sorta-girlfriend Sadie cries for his help” to “sacrificing his life to protect Gems he’s only just met and whose strange appearances have initially weirded him out.”

And there’s probably something symbolic about that. Lars has dedicated so much of himself into faking bravado, posturing how “cool” and “strong” he is (in the “traditional masculine” sense), all while constantly hiding his “lame” interests like cooking and baking (which are “traditionally feminine”). But he was only able to find true inner strength once he opened up and became more honest about his feelings– to himself and to others– and by embracing his softer sides, and thus owning his “self” wholly. It is this strength in vulnerability that pushed him to act despite his fears and insecurities, thus saving the day and many lives– “soft” doesn’t mean “weak.”

But I wonder what does Lars turning pink mean in-universe. His hair is no longer its usual ginger, but instead has the exact same shade as Lion’s mane. Does that mean he now has powers like Lion’s? Maybe we’ll learn more about what all these changes entail as Steven Universe: Wanted concludes in the next episode.