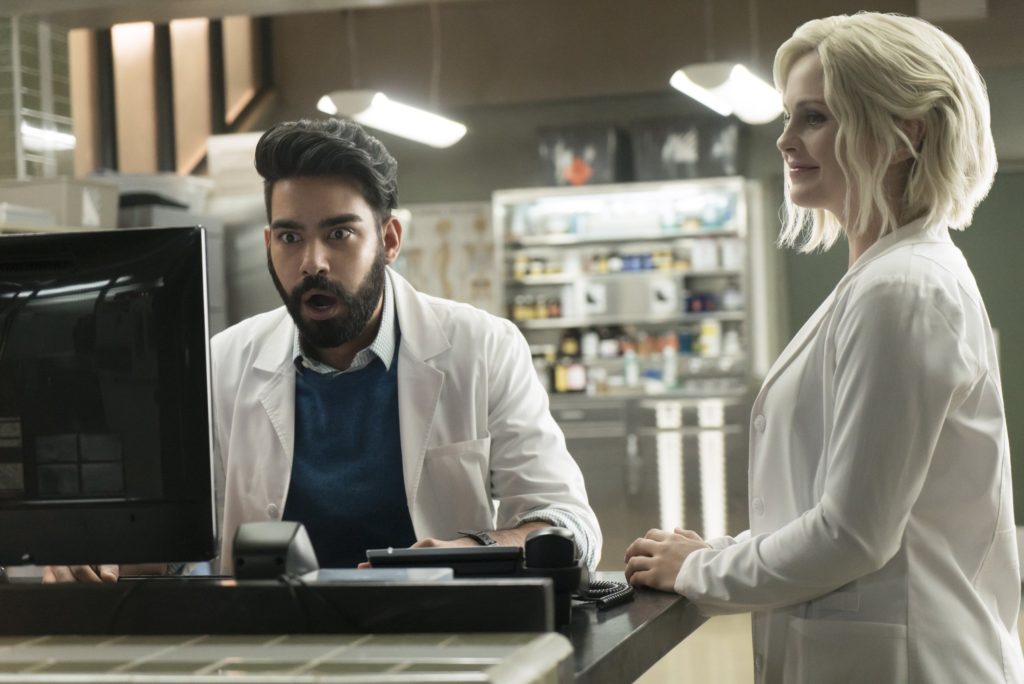 While “Eat a Knievel” was packed with developments – both surprising and not – overall it felt like too much happening at once, making it one of the weaker episodes of iZombie season three so far.

First, while it wasn’t surprising that Blaine was still alive (and that he forced a former client to turn him back into a zombie so that he could stay ‘alive’), that was somehow far less frustrating than many of the events in “Eat a Knievel”. For instance, while I suppose I shouldn’t have been shocked that Harley Johns wasted no time posting the video of full-on-zombie Justin, admittedly I assumed that the writers wouldn’t introduce that particular plot point so soon. Thankfully it seemed that despite this video of ‘absolute proof’, people still weren’t really biting ([bad] pun intended).

Now, I loved that Vivian held Major back after the Fillmore-Graves meeting about the video to reveal that she knew he was no longer a zombie. While I haven’t always loved Vivian, that doesn’t mean that I can’t enjoy and respect a strong female character who gets shit done…but apparently her time on iZombie was meant to be short-lived. No sooner had she called out Major than she took off in her helicopter bound for ‘zombie island’…and that helicopter exploded.

Is there a chance that Vivian is still alive? I suppose there could be a small one, but I really doubt that’s the case. She hasn’t really been around as much as I expected this season, so the combination of that and her being killed off is pretty darn frustrating, but the fact that she wasn’t featured very often this season makes me think there’s even less of a chance that she’s still alive. 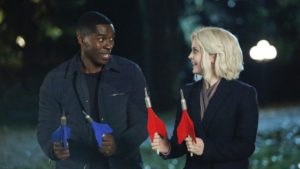 On top of that, the more I learned about the ‘brain donor’ (as it were) in “Eat a Knievel”, the more I disliked him. Even if I had been able to set that aside, though, daredevil Liv wasn’t really my cup of tea, probably because this was one of those brains where we seemed to see very little of Liv herself and therefore far too much of this face-stapling, friend-betraying murder victim.

Now, is it me or is it getting far too easy to figure out who the killer is in each episode? Lately I don’t even feel like it’s worth spending too much time discussing the murder mystery portion of the show, and while that aspect of iZombie certainly isn’t the most important one, I definitely hope they start doing a better job in regards to predictability. Sure, we’re still waiting on more developments regarding Sweet Lady Pain’s death, but they’re drawing that out so much that it’s getting hard to even keep that little plot point on my radar. 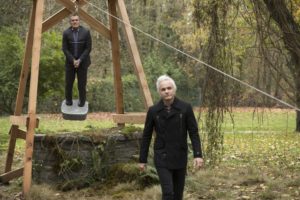 In addition to Vivian’s untimely death, I didn’t much care for the fact that Blaine *still* insists on torturing rather than outright killing his father. Hopefully dropping Dad DeBeers down a well with cement-weighted feet will keep him out of the picture for good and all, but obviously a well-placed shot to the head would have been a better way to accomplish that.

And then “Eat a Knievel” ended with Liv and Ravi showing up at Harley Johns’ “Zombie Truther” party, which definitely didn’t pan out very well. Harley at least kind of recognized Liv despite her [honestly half-assed] disguise, which led to her bowing out and leaving Ravi there alone. The whole situation was awkward; it’s hard to imagine how Ravi could come out of it unscathed, though the previews for the next episode showed him appearing live and well. Even so, I’m still side-eying Liv’s decision to leave him there and shaking my head at the fact that he even bothered staying…but I also can’t wait to hear what happened at the party, so in the end I suppose the writers did their job just fine.