For every iZombie episode that I’m not quite sure about, there are several awesome ones, and “Twenty-Sided Die” is solidly in that awesome category.

Sure, I wasn’t in love with last week’s “Eat a Knievel”, and it wasn’t just because of the brain situation…but “Twenty-Sided, Die” more than made up for all of that. Sure, the episode wasn’t perfect – it was a bit over the top that every guy in the Dungeons and Dragons group featured in the episode was in love with the one girl who played with them – but despite a bit of jumping around, the separate plot points flowed fairly well and definitely opened up a lot of options for the show’s future. 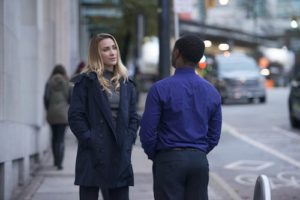 First and foremost, while Clive and Liv didn’t get to solve the mystery of who killed Dan the Dungeon Master, that was because it turned out that he had a secret room in his apartment – a room containing computers that had Russian power plant blueprints on them. This meant that the case was grabbed up by the FBI, so guess who’s back? Agent Bozzio! Unfortunately for Clive, though, she definitely doesn’t trust him after all the drama with the Major-as-the-Chaos- Kidnapper case…so while I’ll be surprised if this was a one-off reappearance, I can’t quite see how Clive will get back in her good graces, which means that if she sticks around she might be a pretty big hindrance to our usual crew. I suppose only time will tell!

Now, while Bozzio’s return could be pretty important in the long-term, it definitely took a backseat to another revelation in “Twenty-Sided, Die” – that being the fact that Ravi’s blue juice may have some unintended (and very bad) side effects. But before I get into that, I have to say that I *love* the fact that Ravi is getting back to normal after the whole Peyton/Blaine debacle. Not only did I have an ‘awww’ moment over him hiding the Chaos Killer hate mail from Major, but he also pulled some badass moves when dealing with the Zombie Truther group. Not only did he convince them that kidnapping zombies (whose scratches are highly contagious!) was a bad idea, but Harley Johns trusted him enough to bring him full-on-zombie-mode Don E at the end of the episode.

And to bring that back around to the blue juice, while we might be missing part of Don E’s story/side of things, it seems as if his current state was caused by his eating the blue-juice-infused brain that Blaine made. Whether it was because of the extra soaking time, the possibility that Blaine screwed up the ‘recipe’, or the amount that Don E ate (or a combination of some/all of those things), it’s clear that if Blaine moves forward with this new money-making scheme there could be Big Problems in the near future. 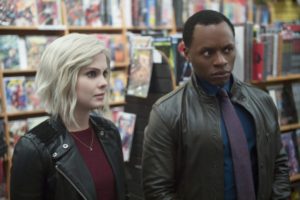 In conclusion, while it was slightly disappointing that we didn’t get to see Clive and Liv figure out exactly who killed Dan the DM, I really enjoyed watching Liv be a Dungeon Master and the fact that not only did she get all of her friends to play DnD, but they stayed up all night doing so, and by the end all of them seemed to be enjoying it – even Clive, who definitely wasn’t all that into it in the beginning. Overall, “Twenty-Sided, Die” felt like a giant leap back into greatness for iZombie, and I’m crossing my fingers that this pattern continues next week!