‘Lazy Eye’ Gets Theatrical and VOD/DVD Release This November 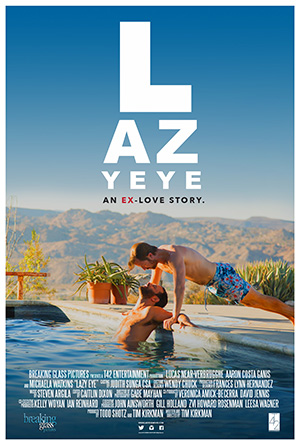 Lazy Eye is a queer film written, produced and directed by Tim Kirkman. It stars Lucas Near-Verbrugghe and Aaron Costa Ganis. The premise of the film is very interesting. Lazy Eye explores what might happen if your ex-boyfriend decides to contact you years after the break up. Do you get back together?

Here is the official synopsis for the film.

“Dean, a graphic designer in Los Angeles, can’t seem to ﬁnd his focus. A stylish, ﬁt, urban gay man, Dean learns a recent change in his vision requires a signiﬁcant change in his eyeglass prescription. When Alex, an ex-lover he has not seen in ﬁfteen years, emails Dean one night, a buried dissatisfaction with his life begins to rise to the surface. Haunted by their distant summer ﬂing in New York City, Dean hesitantly invites Alex to spend a weekend at a rustic house in the desert near Joshua Tree. As soon as Alex arrives, the heat and passion is rekindled in what at ﬁrst seems like the inevitable conclusion to the most romantic of stories. But it is only the beginning of a weekend in which both men will reveal secrets and lies and grapple with the respective decisions that have led them to this point in their lives. Set against the backdrop of the stark, beautiful desert landscape, Lazy Eye explores what happens when the one who “got away” comes back.”

The film’s cast also includes Michaela Watkins (Casual, Transparent). I watched Lazy Eye and I have to say that it is one of the best LBGTQ+ films ever made. Be on the lookout for my review and interview with the lead actors as well as writer/director/producer Tim Kirkman.

Here is the trailer for Lazy Eye.

Make sure to catch Lazy Eye in Los Angeles and New York theaters on November 11, 2016. You can also watch it on VOD as well as own a DVD on 15th November 2016. Feel free to check out the film’s website.

What are your thoughts about Lazy Eye? Will you be watching it? Let us know.