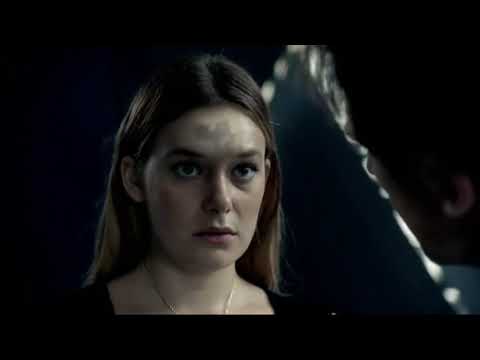 Legion Chapter Fifteen shows us a truly horrifying experience: a crowd a fearful people.  The delusion has spread and Division 3 has become a terrifying place.

While season one focused on David’s insanity, season two is framing him as the sane one fighting to push back delusion from taking control of his friends.  “Chapter Fifteen” shows the delusion monster quite literally crawling into the mind of the Summerland crew and Clark (who, at this point, is basically an honorary Summerland member) and driving them towards insanity.  The delusion monster presents itself in the form of a tar covered bird-like being that leaves a black gooey substance wherever it goes.  It first entered Ptonomy’s mind many episodes ago and used him to spread it to Syd, Clark, and Kerry.  Their delusions send Division 3 into chaos.  Syd and Clark turn on Admiral Fukyama, seeing him as a giant version of the delusion monster that they must kill.  Kerry ends up fighting Vermillion in the hallways, leaving a heap of short circuiting robots scattered around Division 3.  It’s a complete mess.

But then David arrives to save the day.  He uses his powers to pull the delusion monster from his friend’s skulls and pulls one aside into presumably some sort of pocket universe to have a nice chat.  Chit chatting with a monster doesn’t go well, and he ends up shrinking it down and blowing it up inside a mason jar.  But regardless of how poorly this went, it’s unusual to see David as the one that has a solid grasp on reality while all those around him suffer from warped perceptions of the world around them.  It’s an interesting flip of the script. 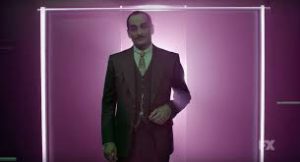 “Chapter Fifteen” also highlights some growing tension between David and Syd.  I adore them as a couple, but we saw our first bit of trouble when Syd admits that she’s jealous of her future self.  She admits its weird to be jealous of herself, but that’s just the way she feels.  But things get even more complicated as we discover that future Syd might not have the most noble intentions with her guidance.  It’s strongly implied that she wants to save Farouk in order to take down David.  This show is complicated, so I’m going to have to watch that scene a few more times to be sure I heard her correctly, but that’s what I took away from her encounter with Farouk in the future.  It’s possible that David is the person who spreads whatever disease or delusion that’s taken out most of the future.  That’s the only possible reason I can see for Syd wanting to take him down.

Shifting away from the plot, one of the biggest highlights of this episode was the music.  A lot of the music was recognizable from other episodes, including the psychic dance battle from the season premiere.  The artistry of this show seeps into every layer from the editing, design, cinematography, and music.  I look forward to the soundtrack for this season to be released.  There are several songs from the first season in my regular playlist, including the Fauxlero sequence.

Based on the preview for next week, it appears that “Chapter Fourteen” may have not been as isolated as I assumed it was.  Last week didn’t disappoint me at all, but it did feel rather self contained.  The different lives of David Haller may in fact play into the overarching plot, or at the very least be referenced going forward.  I fear for Syd and David, though.  That trailer doesn’t give me much hope that this relationship can weather whatever is coming our way.