Wednesday Webcomics: For All You History Nerds…Lore Olympus

This Wednesday’s webcomic rec is a tale as old as time…or…like…a really old story, at least. Lore Olympus is a bright, colorful, slightly more modern-day retelling of the story of Hades and Persephone.

Lore Olympus, created by Rachel Smythe and hosted by Webtoon, is a new look at Greek mythology. The main focus is on Hades and Persephone and their relationship – Hades sees Persephone at a party and from then on it’s a comedy (and sometimes a tragedy) of errors – but all the major players are there and get a chance to shine. For example, there’s a brief interlude as we learn about Eros and Psyche. 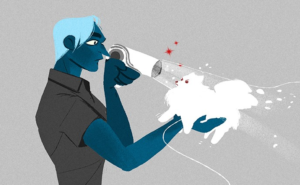 It’s honestly a very interesting take on the story; think of how the Greek gods and goddesses come across in the Percy Jackson books, and you’ll get some idea of the world Smythe has created. Hades is a businessman, and the Underworld is a giant office tower. He owns a ridiculous amount of dogs. Persephone is in college and training to be a sacred virgin. She lives with Artemis and has a seriously overprotective mother. They drive cars and go shopping and have cell phones, and at the heart of the story are two people who don’t feel as though they deserve the kind of love they both want.

The Hades of Lore Olympus is very much the Hades of Greek mythology, rather than the bastardized Hollywood version you see most often. He’s a huge nerd who just wants to be left alone with his dogs and his books. I can relate (except for the dogs). Persephone is self-conscious and unsure about herself, and I’m sure there a lot of people out there who can relate to how she struggles trying to fit in to a world she’d been largely kept away from. 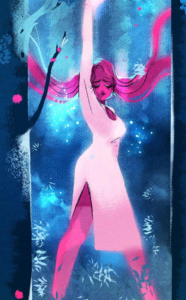 You’ll notice, as I recommend more of these, that I am attracted to a particular art style. However, the art in Lore Olympus is nothing like what I usually like, and that’s probably a good thing. It’s a very unique and creative style that utilizes a lot of color and abstract techniques. It’s not quite as detailed as some other comics, but it’s not just blobs on your screen, either. The detail is different than you might be accustomed to, but the characters and the backgrounds are still unmistakable. The art style is probably the best thing about Lore Olympus. Yes, the story is great and the characters are compelling (even Apollo, the jerkface), but the art is truly a thing to behold.

I’m really enjoying Lore Olympus. I’m familiar with Greek mythology, though with certain myths more than others, and I’ll admit that the story of Hades and Persephone was one that never really interested me before. I’m glad that this comic is changing my mind. It’s just truly a lovely story. Hades and Persephone are both endearing, and you’ll find yourself rooting for those crazy kids to get together pretty quickly.