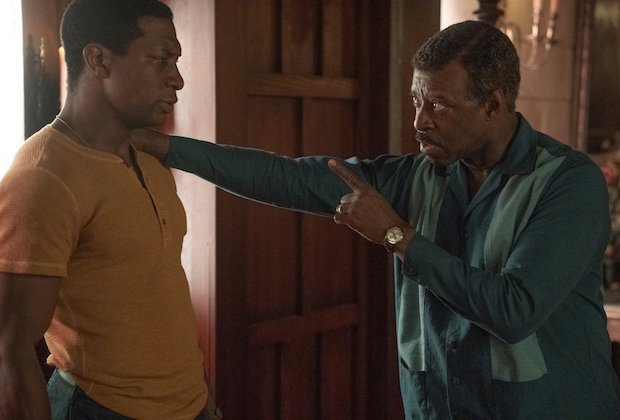 ‘Whitey’s on the Moon’ was a tense episode that moved the plot forward at a nearly breakneck pace.

Things are moving fast in Lovecraft Country. Here we are on just the second episode, named after Gil Scott-Heron’s spoken-word piece ‘Whitey on the Moon,’ and we already have a major character death, the missing character (that sparked the initial plot) found, and the destruction of the secret lodge our main trio walked to in the episode prior. These are all things I expected to happen in the back half of the season, but here we are. This show isn’t wasting time with the plot and its kind of exhilarating.

The biggest emotional gut-punch of the episode is the loss of Uncle George. It’s something many of us suspected would happen just based on how narratives need to raise the stakes on the plot by offing one of the main characters. But his death came up rather early in the story. It’s a testament to the writing talents that we were already so invested after just two episodes that his loss really made a major impact on us as viewers. We’ve easily found ourselves emotionally invested in these characters, which is probably one of the show’s greater strengths.

If we’re already devastated over Uncle George, just how damaged are we going to be if something happens to Leti or Tic? We already had a scare with Leti this week and I was about to throw my laptop in response. I barely contained myself over the loss of Uncle George as it is. If Leti gets offed I may struggle to carry on with the show. I’ve been known to drop shows that kill my favorites, but sometimes I can still find enough left in the show to carry on. This show has so much depth that maybe I could continue. But let’s not try that, okay? Please let Leti live. I love her so much.

The introduction of the Order of the Ancient Dawn, however, was probably the biggest plot element introduced in ‘Whitey’s on the Moon.’ The Braithewaite’s are extremely Aryan in appearance –  blond-haired, blue-eyed, extremely pale – the perfect visual antithesis to the protagonists that are exploring a plot that winds both racial and supernatural themes together. They are the main characters’ opposites on pretty much every level – visually, thematically, and in personality.

This contrast relates directly to the title of the episode –  a 1970’s spoken-word piece that contrasts how society can send white people to the moon while remaining indifferent to the suffering of Black people in our society. This group of extremely white dudes has been having their little fancy boy’s club in the forest while the Black descendants of Titus Braithewaite face all the difficulties that come with being Black in Jim Crow-era America. They’ve been keeping the magic for themselves, essentially, while others suffered. Their apathy towards the suffering of others crosses over into pathological selfishness as they pursue their own goals. They don’t care that Atticus is related to Titus Braithewaite beyond the fact that this lineage can be used to open a gate to Eden. Other than that, they have zero respect or care for him. 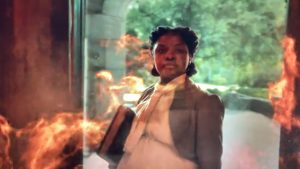 However, at first, it seems they are playing nice with our main characters, but it’s clearly a ruse to keep them isolated in the lodge. Their rooms seem luxurious but are designed to keep them isolated and passive. Our protagonists see through this pretty quickly – Leti remarking that the word ‘shipping’ is a polite way of saying they were involved in the slave trade. This assumption is confirmed when Atticus sees a vision of his ancestor, Hanna, who was a slave at the lodge before she burned it to the ground and fled into the woods pregnant with her master’s child. She guides him to safety out of the mansion, which collapses seconds after he escapes.

These are not good people. They do not have good intentions. And they aren’t even very good at hiding it. And now their home has been destroyed twice by people from the same lineage. So any pretense that they were actually kind will likely be dropped.

Christina Braithewaite, however, may have a depth to her that isn’t quite so apparent right off the bat.  I’m not quite ready to say she’s good, exactly, but she seems to have some resentment towards the patriarchal structure of the Order. This may end up being a ‘the-enemy-of-my-enemy-is-my-friend’ situation with her. Perhaps she’d be willing to partner with our heroes to destroy the Order, but that doesn’t exactly mean she’s exactly a good person.

Then again, we haven’t really seen much of her yet outside the discomfort she feels at the lodge. Maybe she’s not so bad after all? We’ll find out soon I suppose. And at the pace we’re moving we may find out her true motives and where her heart is a lot faster than we expect. I’m very curious about her.

Separate from the incredible plot and deep symbolism of the show, I’m finding that the soundtrack is incredibly well assembled. It’s rare that you’d have something like the spoken-word piece that this episode is named after being placed in the same story as a Marilyn Manson song. Den of Geek has a full soundtrack listing from the first two episodes. You should check it out. I’m pretty blown away at the range of music included in the soundtrack.

It’s rare for me to be completely baffled about where a plot is going just two episodes in, but it’s so fast-paced I freely admit that I’m at a loss about what to expect. There are a few clips from the trailer that we haven’t seen yet, but I can’t really pick apart any deeper meaning to them enough to guess where we’re going. So instead of having any speculation about what we might be getting next week, I’ll just sit back and enjoy whatever this show wants to give us. I look forward to it.

Feel free to leave us your thoughts.

You can listen to our recap of ‘Whitey’s on the Moon’ by visiting our YouTube channel.

1 thought on “Lovecraft Country 1×2 Review: Whitey’s on the Moon”