First off, this was more of an expository episode rather than action packed. This is in no way a slight against the show, just an observation. Honestly, I think we needed it. After the last few weeks, there have been a lot of developments and I really think we needed a “hold up, let’s talk about this” moment. There is a lot to explain and “Afterlife” fills us in a bit. 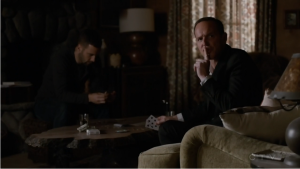 Before I start, let’s just say Coulson in a suit without a tie is weird. I don’t like it. Stick him in a t-shirt or a suit and tie, anywhere in between. What I do like though, is Lance Hunter. I don’t care what anyone says, that man has grown on me. Nothing against Ward, but this is who should have been here from the start. I think he’s awesome. I also am massively disappointed in Mack and Bobby (our other new characters this season). They have both broken my heart working for “the real S.H.I.E.L.D.”, but the “group hug” comment… that made me laugh. For those of you that don’t know, “Group Hug” was the production title of The Avengers while it was filming. And that was one of many Avengers name drops in this episode, which is expected since Avengers: Age of Ultron opens in less than a month. Anyway, Bobby being all sneaky with Simmons. Man, that hurt. I wonder would Clint would say… probably something about pizza or farms. 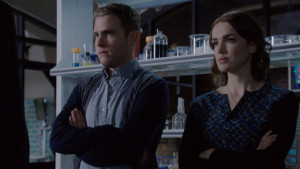 Speaking of one half of my AOS OTP, stop calling him Leo. His name is Fitz. Calling him Leo just kind of sounds both patronizing and overly familiar to those who aren’t allowed to say that. I’ll allow it for (Jemma) Simmons, but I think it’s because of the injury and recovery that I’m more protective over Fitz. He’s just too good to be treated like that. He’s too precious and deserves all the dogs and monkeys he wants! Oh and the sandwich moment, yes, I teared up.

Moving on, we also saw what happened to Skye. Enter that guy from The Tomorrow People – Lincoln (Luke Mitchell). I have to agree that I think Lincoln is either Phantom Rider or Hellfire. I like the addition of the Inhumans, though I don’t trust them as far as I can throw them. I don’t want them to be made the bad guys, but they are the unknown factor that Marvel has been building up across the MCU. Again, this points towards the upcoming Avengers sequel. Oh, and I don’t appreciate that crack at kale, Lincoln! 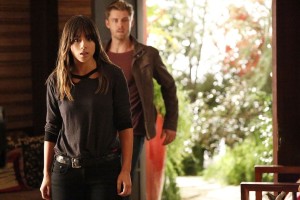 I think one of the two biggest surprises of the episode, though, was Deathlok! Mike Peterson is back! Yay! That makes me so happy, you have no idea. I am ridiculously happy that he’s back. I’m a big fan of J. August Richards and would really like him to stay. The second… Skye/Daisy’s mom! I actually shouted “mom” at the screen. Yes, Jiaying is still alive! Considering that she has healing and eternal youth, I’m not surprised they added immortality and the ability to regrow EVERYTHING to the list. (Minus the scarring.) The non-response from Cal, though, wow. I think he’s gone from crazy scary to just crazy at this point. Poor guy.

Ultimately, I think that this has definitely brought the story forward. I’m really happy about that. I think that there has a been a bit missing the last few weeks, and “Afterlife” is a step in the right direction. Though, I’m sure I’m not the only one at the end of this asking one simple question…