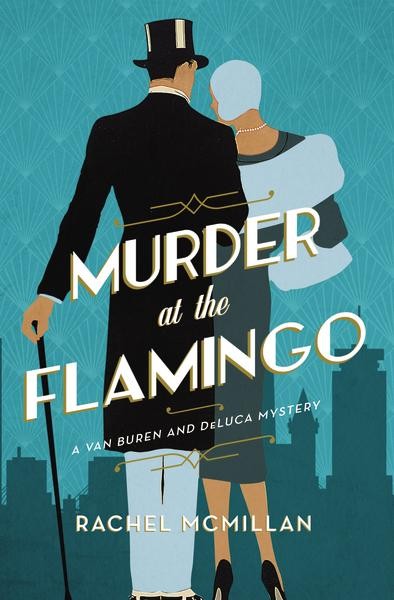 While not on my list of galleys to grab at this year’s BookExpo, I was nonetheless intrigued by both the title and the cover of Rachel McMillan’s Murder at the Flamingo. I was excited to sink my teeth into this murder mystery set in Depression-era Boston. Sadly, I was disappointed.

Murder at the Flamingo is McMillan’s first entry in the “Van Buren and DeLuca Mystery” series, starring ex-socialite Reggie Van Buren and former lawyer Hamish DeLuca. Despite the salacious title, this book was kind of lackluster. It’s the first in a series, so I understand that it needs to devote time to setting up the characters and their backstories as well as the context of these two solving mysteries. However, I felt that it was too bogged down in setting the scene. The titular murder doesn’t even happen until about halfway into the book, and by then my interest was flagging.

Hamish and Reggie are actually quite interesting as protagonists. Reggie starts the book by running away from her well-to-do family after her boyfriend tells everyone at a garden party that she’s accepted a proposal he didn’t actually make. Hamish starts the book by running away from his privileged life after having an anxiety attack at his first major trial. I love Reggie’s desire to do more with her life than just become somebody’s wife, and striking out on her own makes her well aware of her own privilege, especially during the Great Depression. And I was pleased to see a main character with anxiety – not only that, but constantly dealing with it throughout the book the way that Hamish does.

While the characters are captivating, and the prose is very poetic, the mystery itself – the meat of the book – is just so-so. As I mentioned before, the murder doesn’t happen until midway through the story, and even once it does, Hamish and Reggie’s “investigation” is halfhearted. Rather than a nailbiting gumshoe mystery keeping me on the edge of my seat, their attempts at deduction come off as more of an afterthought. The two of them investigating involves semi-examining the crime scene and asking a couple of suspects one or two questions, then formulating a theory based on no contextual evidence and going forward as though their theory were fact.

The far more interesting mystery – just what exactly is going on with Flamingo owner Luca Valari, who is Hamish’s cousin and Reggie’s boss – was dealt with similarly. The conclusion is convoluted and not very interesting. When I finally reached the climax, I felt bereft. This would be a fine book if it were a romance about two people meeting by chance, but it’s a murder mystery, and as a mystery, it falls drastically short.

Murder at the Flamingo by Rachel McMillan is published by Thomas Nelson and is available July 10 wherever books are sold.