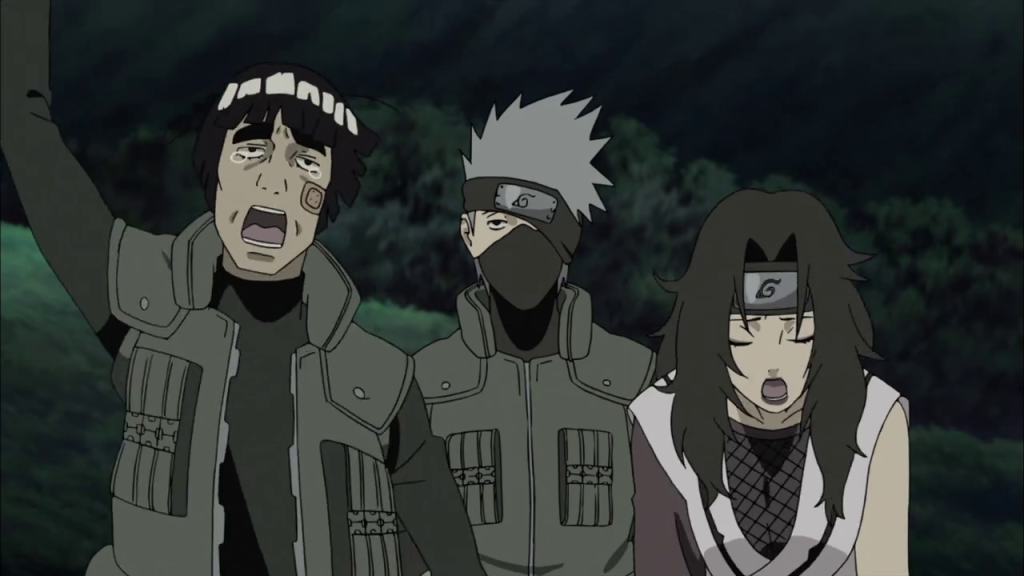 It looks like the atrocity that is the current Naruto Shippuden filler isn’t going to end any time soon. The Jiraiya’s Ninja Scrolls is most definitely the worst filler ever in the franchise. I just want the whole thing to end already and the story to return to canon, or at least a different filler arc.

When it first started, I was actually excited about a filler arc where younger versions of familiar characters got to battle the Akatsuki in a whole new storyline. I even enjoyed the starting episodes, but it was obvious the story was going to drag out, and the weakness of the plot threads began to be revealed. All of this would’ve been good if it lasted for a couple of episodes, but the Jiraiya’s Ninja Scrolls have been going on for 9 weeks now, and the preview at the end assured viewers it will be back next week as well!

Showing Tsunade’s dream world under the influence of the Ultimate Genjutsu could’ve made for some interesting stories starring her, her boyfriend Dan, and her younger brother Nawaki. Both Dan and Nawaki were lost to the violence of war years ago, and Tsunade went through life thinking it was her fault because she couldn’t save them. Seeing her living life surrounded by her loved ones would’ve been far better than the current arc, where she reads a story Jiraiya wrote. I have no idea why Tsunade is so interested in reading the whole thing. It just doesn’t make any sense to. The story isn’t even good! It actually makes you dislike your favorite characters.

The mystery surrounding the antagonist of the current arc came to an end this week, but it didn’t pack the punch I was expecting. In hindsight, that makes sense. You can see the writers stopped putting any effort into the current arc and just continued writing out the script to waste time. The Naruto manga released its final issue a year ago. The whole fandom knows about the conclusion of the Great Ninja War, and trying to drag out the series with boring fillers makes it look as if the anime studio wants to milk the franchise out even more.

To me the current filler arc comes across as a Genjutsu-inflicted nightmare that fans of the series have to endure. What do you think about it?