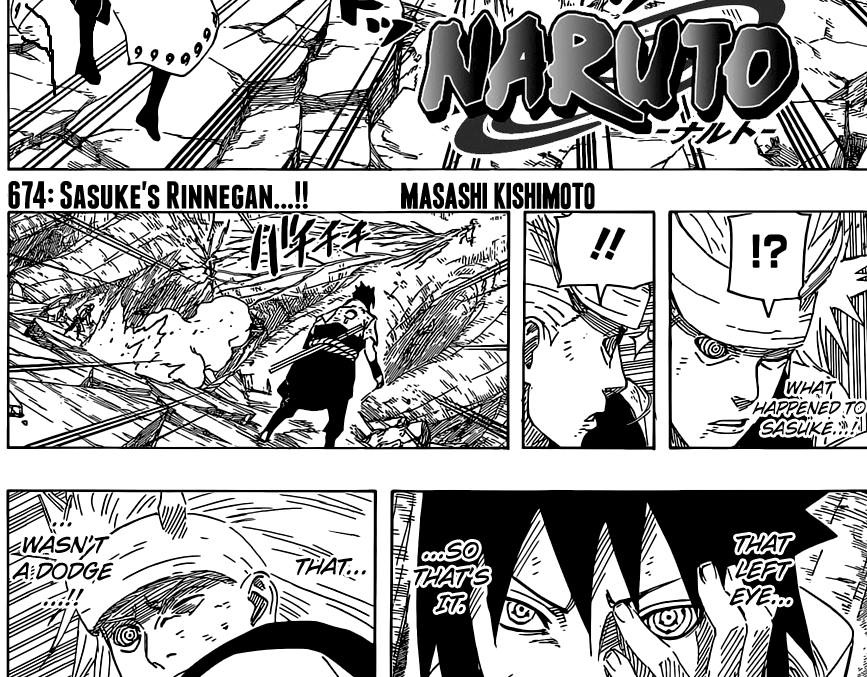 Naruto returned with another exploding manga issue this week. We got to see Naruto and Sasuke work as a team again, and showcase some more new cool-looking powers. There were some things that didn’t make sense to me, but I’ll get to those later.

The chapter started with Madara attacking the two ninjas with lightening. Naruto threw one of his ‘chakra sticks’ to block the attack and Sasuke used his Rinnegan. I’m very interested in what Sasuke’s new eyes can do. The whole action sequence was very fast and it took me some time to figure out what was happening. The working behind Madara’s ‘Limbo’ technique was explained. I thought it had to do something with telekinesis but it turns out the technique allowed the user to create an invisible clone of themselves for attacking and defending purposes. Sasuke was able to see through the technique and devised a strategy to land an attack on Madara. Sasuke has always been the brains of Team 7 along with Sakura since Part 1. No matter how strong Naruto gets, Sasuke has an upper hand when it comes to brain power. Madara also made a comment about a connection deeper than blood between him and Sasuke. I think he’s going to realize Sasuke being the reincarnation of Indra just like him.

I have to say, Madara didn’t feel like a threat in this issue. When he absorbed the God Tree I was expecting him to put up more of a fight against the young ninjas. But he just ran away. Remember when I predicted Madara trying to retrieve his missing eye? Well, that was his priority this issue. He escaped Naruto and Sauske and headed towards Kakashi. Everything happened so fast. He took Kakashi’s Sharingan, inserted it into his eye socket and used Kamui to reach Obito. That’s where the problem arose. I don’t know if it’s because Madara is very powerful, but it’s been well-established in the story that it takes days, even weeks to get used to new eyes. Kakashi didn’t awaken his full powers until Part II of the manga, and it took weeks for Sasuke to get used to Itachi’s eyes. Maybe Kishimoto forgot or didn’t want to waste time. Whatever the case, the whole thing felt out of place. I know real world logic doesn’t apply to fictional universes, but I expect already established fictional logic, the author himself created, to apply. 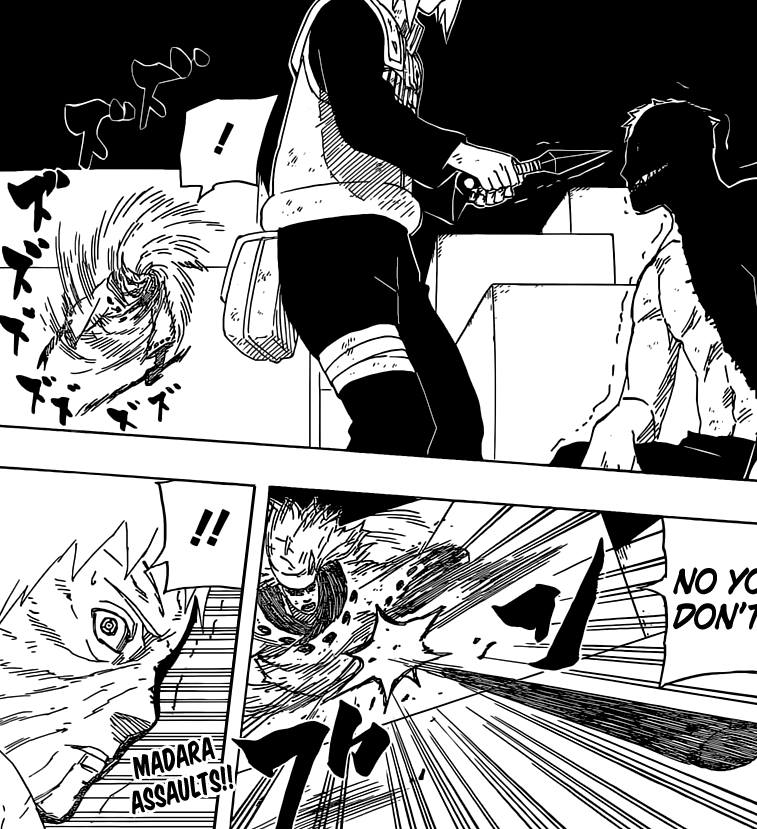 It was revealed that Obito requested Sakura to pierce and destroy his Rinnegan. The problem with the scene was Sakura hesitating, kunai in hand. What is wrong with her? Obito, a ninja who killed countless shinobi during his lifetime is standing right in front of her asking her to destroy his powerful eye and she’s hesitating! The eye isn’t even attached to his own body. It’s on Black Zetsu, that’s attached to Obito. She should at least punch him! I think Kishimoto wants fans to dislike Sakura.

I remember when Sakura hesitated when it came to piercing Sasuke. That was understandable. Sasuke was a member of her team and she had a crush on him. Why she hadn’t attacked Obito already doesn’t make sense to me. She was fine considering him an enemy a few seconds ago.

Sasuke was able to cut Madara in half but it didn’t stop him from using Kamui. His upper half reached the Sakura and Obito, and he attacked them. So, Kishimoto is going to make Sakura battle a Madara that’s cut in half? Having the God Tree inside him, I think he can easily regenerate. I don’t think Sakura is strong enough to battle him. Whatever the case, next week’s issue is going to be quite fun. Kishimoto has the chance to make Sakura shine as a character.

What did you think of this week’s issue? Are you tired of Madara yet? Please share in the comments.