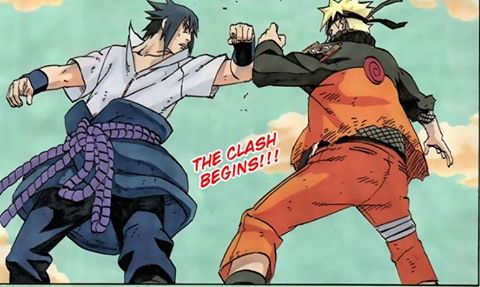 This week’s chapter of Naruto felt like a big letdown. I know it was supposed to show the much-anticipated battle between Sasuke and Naruto, but even the fight sequence didn’t look impressive. With only four more chapters left, does Kishimoto even care what fans think anymore?

Last week’s chapter ended with Sasuke and Naruto blocking each other’s attacks and I was expecting an awesome hand-to-hand battle this week. Both characters started using ninja techniques, however, and everything looked like a mess. I guess the fight will look better in the anime. Both characters shielded themselves in their massive chakra forms. Sasuke took out his Susanoo and Naruto took out his Kurama cloak. I wanted to see a more close-ranged fight but that didn’t happen. There were just big explosions everywhere with some flashbacks thrown in. What is it with Kishimoto and drawing panels upon panels of boring flashbacks?

I always thought that Sakura and Sasuke’s relationship was unhealthy but the truth is Naruto and Sasuke’s relationship is the worst. I don’t know if Kishimoto wanted to show true friendship between the two male leads, but after everything they have gone through, their relationship comes across as an abusive one. During the final battle between the two, Sasuke came across as the guy who hits his partner, while Naruto was the victim who kept on taking the hits because of love (or in this case, friendship).

Yes, the Naruto manga is a very entertaining series, but if you want something that depicts healthy relationships, I would suggest you look somewhere else. The whole basis of Naruto and Sasuke’s relationship is unhealthy. I can’t get over the fact how Naruto thought Sasuke chose the valley as the battlefield because of some past sentiment. It reminded me how someone would justify their spouse hitting them because he or she loved them.

During their battle the two entered a weird white dimension and I guess those two will be talking things out, which I don’t want the last four chapters of Naruto to be focused on. I personally want Sasuke to die. Naruto needs to kill his so-called best friend to grow as a character and understand that not everything is “perfect” in the world.

What did you think of this week’s chapter of Naruto? Do you want Sasuke to come to the good side? Let us know!

Previous:Curtis Armstrong talks Supernatural, King of the Nerds, and more!
Next: Giancarlo Esposito discusses Once Upon a Time, Breaking Bad, and future projects!