This week’s chapter of Naruto continued the battle between the yellow-haired protagonist and the antagonist, Sasuke. We also got to know a bit more about Sasuke’s plan for controlling the world.

I was expecting this week’s chapter to be Naruto and Sasuke talking it out because of the events of Naruto 695. However, I was glad that didn’t happen. They escaped from the white space they were in and resumed their battle. It was obvious that Naruto wasn’t attacking with the intent to kill. In contrast, all of Sasuke’s attacks were aimed at killing the young hero.

Ever since Sasuke revealed that he wanted to bear all the hatred in the world on his shoulders I kept asking what would happen once he died. My question was answered this week. Kishimoto remembered that the rouge ninja had the Sharringan and the Rinnegan. Using the ocular powers, Sasuke would become immortal and keep on absorbing all the hate. I understood where he was coming from when he said the 5 ninja villages would go back to being enemies. They all banded together to take down a common threat. Without a common enemy to fight anymore, the villages were bound to attack each other.

Now, I’m not saying that I’ve sided with Sasuke or Naruto. Both their ideologies have faults. However, I hope that after the battle Naruto realizes that Sasuke made some good points. By combining both their ideologies, some sort of peace can be obtained in the ninja world.

A lot of the panels showed massive explosions. They looked a bit confusing to me in the manga. I’m looking forward to watching 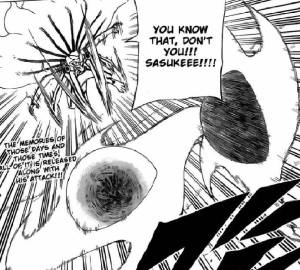 them in the anime. There’s a chance the anime will lengthen the final battle as well.

Was it just me or did the two ninjas suddenly leave The Valley of the End and re-appear where they left Sakura and Kakashi? It felt as if Kishimoto intentionally skipped drawing a few panels to quickly make the two ninjas reach the trapped tailed-beasts. Once they were there, I was surprised to see that Sasuke was able to absorb chakra from them. However, Naruto had a plan and made one of his Kurama clones to gather natural energy and then transfer it to him.

I liked how Kishimoto made Sasuke get the psychological upper hand during battle by making a jibe at Naruto’s Shadow Clone Jutsu. Come to think of it, what he said about the jutsu being Naruto’s weakness did make sense. The young hero was always lonely growing up and the fact his signature move is making copies of himself does have a deeper meaning behind it.

In the end, both ninjas threw their attacks at each other. Will the battle end in a draw? Will Sasuke accept not winning the battle? I can’t wait for the next chapter to come out!

Did you read Naruto 696 this week? Are you enjoying the battle? Let us know!