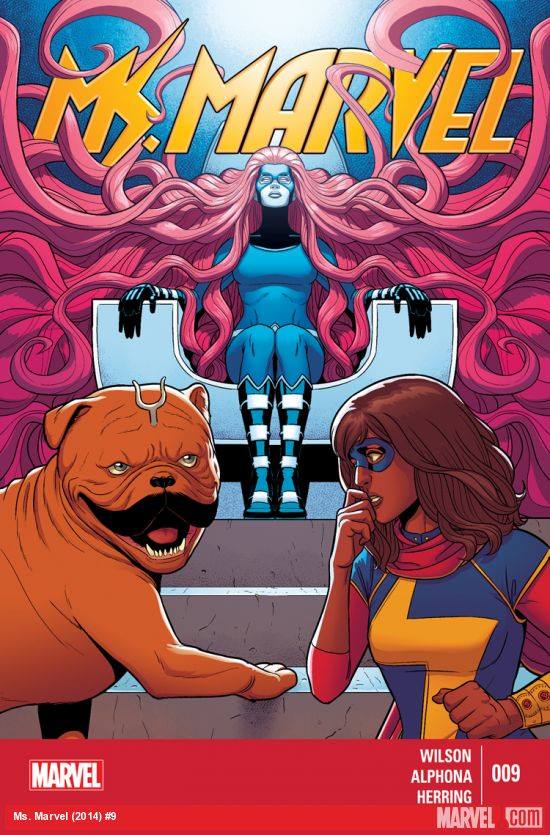 This month’s issue of Ms. Marvel revealed more about Kamala’s powers and her determination to save New Jersey. She also got to meet Medusa, queen of the Inhumans.

Last month’s issue of Ms. Marvel ended with a cliffhanger, and I was really worried about her well-being. She wasn’t doing much damage to the 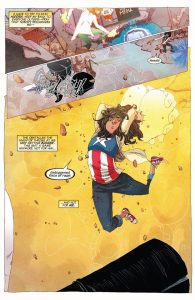 giant robot and her stamina was being depleted. However, this month’s issue showed Kamala summoning every last bit of her strength and defeating the giant robot. She fainted after the battle and was teleported to New Attilan, present on Earth. I was surprised to see that Bruno went along with her.

I like Bruno’s character. He’s smart and a good friend to Kamala. However, I’m weary about his feelings towards her. Kamala hasn’t shown any indication that she likes him other than a friend, and his crush on her looks dangerously one-sided. There are a lot of complications that can arise if Bruno comes clean about his romantic feelings for her, and I don’t want their friendship to be ruined.

G. Willow Wilson did a great job writing the story. She was able to give us fight sequences, as well as panels revealing secrets about Kamala’s origins, without them looking out of place. The series has done a good job maintaining a balance between fast-paced action sequences and Kamala’s personal life. I think Kamala will meet more Inhumans as the series progresses. I liked how she felt confused about the new information, but put it aside to help her friends and defeat The Inventor.

Adrian Alphona’s art is one of the best things about Ms. Marvel. He knows how to convey humor in every panel. I greatly enjoyed seeing a kid sleeping through the Ms. Marvel vs. Giant Robot fight, while wearing a t-shirt with ‘Relax’ written on it.

In the end, Kamala Khan went to free the runaways from The Inventor, against Queen Medusa’s wishes. Kamala might not be the smartest hero in the Marvel Universe, but she’s quick on her feet and knows how to tackle the predicaments she gets herself into. I was impressed by the way she destroyed the machine that trapped her in a force field.

I’m looking forward to knowing more about Kamala and her Inhuman heritage. It would be fun if she ends up making some Inhuman buddies. There’s still the ‘Bruno-having-a-crush’ thing, too. I hope it doesn’t end up creating a wall between the two friends.

What did you think of Ms. Marvel #9? Are you enjoying her interactions with the Inhumans and the new four-part arc? Let us know!