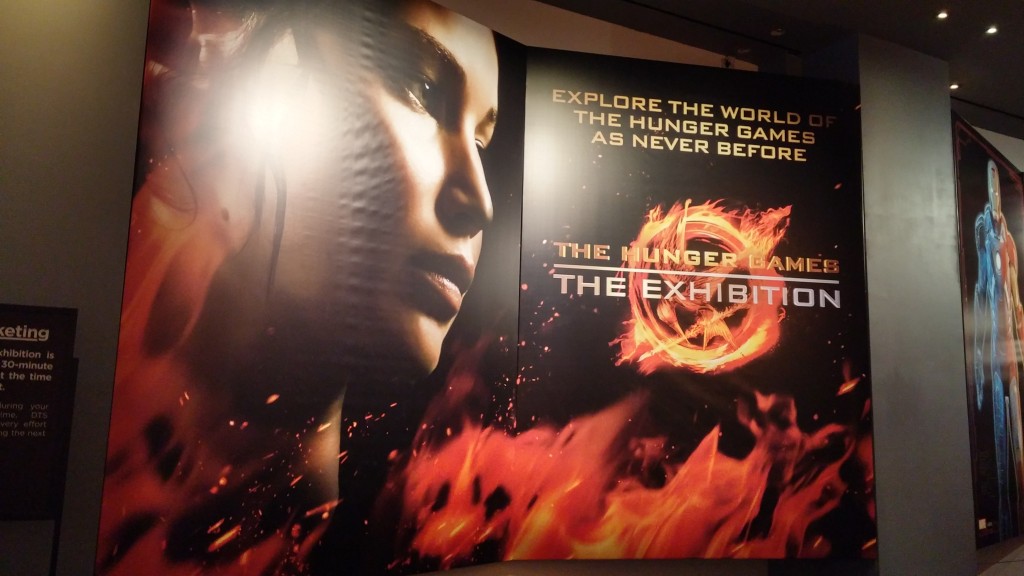 I don’t particularly consider myself lucky to live in New York City. This is just where I live – in a normal, primarily IKEA-furnished apartment – and work – at a normal, fairly boring job. However, I do acknowledge that living here opens me up to experiences that I would not be able to have otherwise. Experiences that make me a very happy geek. Experiences like my recent trip to The Hunger Games: The Exhibition, which opened July 1 for a six-month engagement at Discovery Times Square.

Previously home (repeatedly) to the similar Harry Potter: The Exhibition, Discovery Times Square sits on 44th St between Broadway and 8th, an area of the city I generally avoid due to the heavy influx of tourists. However, when one’s roommate manages to procure severely discounted tickets to something one would have attended much earlier if one could have afforded it, one does not say no simply because it means venturing to Times Square.

The exhibition starts with a short video co-hosted by Elizabeth Banks and Elizabeth-Banks-as-Effie-Trinket, which talks about the global phenomenon that is The Hunger Games and, naturally, shows various clips from the films that have already been released. (Part Two of Mockingjay will be in theaters later this year.) The video is not broadcast on a measly television screen, but on the walls all around you – a life-size Effie standing next to a giant Mockingjay symbol, which moves into the various poses attributed to each of the films. You are literally immersed in the world of The Hunger Games right from the start.

From there you journey through the different stages of Katniss’s story. You start at the Hob, the heart of District 12, and are greeted with an extensive collection of the props and costumes that went into crafting the series. It’s not just props and costumes, though. There is also concept art, detailed sketches of the intricacies of the wardrobe and the architecture of the sets. The exhibition covers two levels at Discovery Times Square (funnily enough, the same area of the building that once housed the Harry Potter exhibition) and is chock-full of “insider” information, from the sculpting to the scripting to the shooting. Every facet of production is accounted for and available for you, the regular fan. Even casual fans of The Hunger Games would be struck by how completely real everything seems, as though you were literally walking in the wilds of North Carolina.

As you move through the story, you go from District 12 to the Tributes Train (and possibly pause here to pose for pictures, as my roommate and I did) to the Capitol to District 13, all the while gazing at incredibly detailed costumes and painstakingly recrafted sets. The food on the “train” looked so real that I very much wished I could have eaten it. With the music and the backdrops that change each time you move to a different section, it very much does feel like you just stepped into the pages of the books, or wandered into the movies themselves. The only things you really don’t get to “see” are the actual arenas, although you still get to see pieces from them.

But you can do more than look here. The exhibition is interactive, allowing you to not only showcase your skills but also to insert yourself into the story. In the District 12 section, you are quizzed on your knowledge of various plants (hint: most of the plants have a character named after them!). In the Training Arena, you are tested on your ability to tie a proper knot (which I did not attempt). A kiosk in the center of the room shows behind-the-scenes videos about the making of the arena from the 74th Hunger Games. In District 13, you are able to make your own propos (starring you!). Not to mention, there are numerous spots along the way that are perfect for picture-taking. At the very end of the exhibition, you are literally inserted into the film; you stand in front of a green screen and the magic of television puts you in the chariot as the tributes are paraded before the citizens of the Capitol.

Remember the video I mentioned at the beginning, that talked about the global impact that the series has had? It shows when you near the end of the exhibition, and the last section is a gallery, the walls covered with wonderful art made by fans. It is always refreshing when you get to see fans being appreciated – even celebrated – and it was thrilling to wander among the various prints and marvel at how many talented people there exist in the world, who are so inspired by the story of The Hunger Games that they were able to create these works of art.

As if that weren’t enough, there is also a gift shop. (Come on, this is America. Of course there’s a gift shop.) There is the typical fare – you can buy the books and the films, as well as each incarnation of the mockingjay pin – but you can 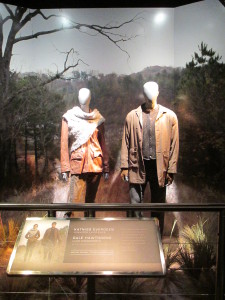 also buy things like aprons that say “Peeta’s Bakery” and even the poncho-like sweater Katniss wears in Catching Fire. (Care for a stuffed Buttercup? You can get one of those, too!) A lot of these items were out of my price range, so I mostly stuck to the cheaper items, like magnets, but I did splurge on a super-comfy t-shirt with a feather on the front and a tiny mockingjay on the left shoulder.

In short, The Hunger Games: The Exhibition was a fantastic experience, and I do count myself fortunate that I live in a city that garners so many incredible opportunities. It had honestly never occurred to me before to post about these things here on The Geekiary, but I know that the me who grew up in a town so small even people in the area haven’t heard of it would have loved to read about things like this. The only way I got to do anything when I was growing up was vicariously through other people!

I know that it simply isn’t feasible for everyone to get to New York City to see the exhibition. Which is why you may be excited to learn that it, like the Harry Potter one before it, will be going on a global tour! The next destination is San Francisco, and though they haven’t yet announced any future stops, you can sign up for news updates and be notified if/when it comes to a town near you!

Now, since even with a global tour, it won’t be possible for everyone to go to the exhibition, we here at The Geekiary would like to help bring the exhibition to you! My t-shirt and magnet weren’t the only things I purchased at the gift shop; I also picked up a copy of the official exhibition guide and now I’m offering it to you guys! The guide features pictures from the exhibition as well as stills from the movie and is filled with backstage information about the filming of the series! The contest will run for two weeks, starting at midnight (Eastern time) August 31st and ending midnight (Eastern time) September 14th! 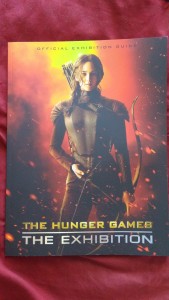 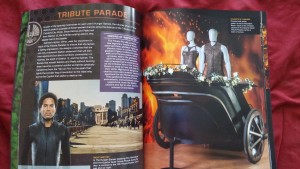 5 thoughts on “New York Geeky: Taking a Trip to Panem with The Hunger Games: The Exhibition”