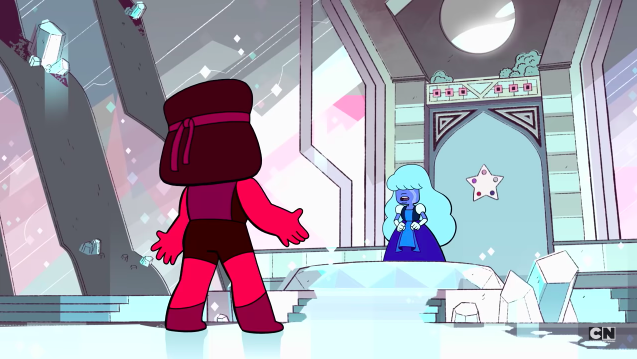 Once upon a time, they were falling in love. But in the wake of the latest reveal about Pink Diamond, Ruby and Sapphire (and the rest of the Crystal Gems) would say, “Now We’re Only Falling Apart.”

After the truth comes out that Rose Quartz and Pink Diamond were the same person, Garnet falls apart and Sapphire lashes out at Ruby before storming off to the warp in anger. Steven and Pearl find her at Rose’s now-frozen fountain, resenting Rose for what her lies have cost them– all the suffering they’ve gone through and all the friends they’ve lost. Pearl tells Sapphire that she deserves to know everything. Now that the gag has been broken, she can tell everyone what she knows, and “Now We’re Only Falling Apart” becomes the first of hopefully many more flashback episodes about Pearl and Rose’s history together.

From the very beginning, we’ve been given an idealized image of Rose Quartz: The loving mother who had passed away to bring Steven to the world. The healer who felt real love and compassion for others, human or otherwise. The rebellion leader who rallied countless Gems to her cause of freedom for and on Earth.

Over the course of the show, this too perfect image is slowly stripped away, her high pedestal knocked down. We learn she’s kept a lot of secrets, some dark and worldview-changing ones, from even her closest friends. She bubbled Bismuth and lied to everyone about it for over five thousand years. She shattered Pink Diamond and caused countless Gems a lot of pain.

“A Single Pale Rose” was a major turning point in all this. Besides being Pink Diamond all along, we find out that Rose had taken away Pearl’s freedom by ordering her to silence. Things will never be the same and it feels like we’ve hit rock bottom. But from here on, the show could build towards a more rounded, more realistic image of Rose now that we have this huge piece of the puzzle.

Even then, the story Pearl shares here in “Now We’re Only Falling Apart” still feels idealized and abridged. It makes sense in-universe, since she was trying to reassure Sapphire, but I wish we could have seen more about how Pearl feels about all this. Now that the gag order is gone, I want to know Pearl’s story. Not just Rose’s, or Pearl-and-Rose’s. And perhaps we will, soon.

What we do get to see here though, is the first time Pink Diamond became Rose Quartz, and how she saw the beauty and worth of the life on planet Earth. We see how she tried everything to save the Earth as Pink, to no avail. We see a few callbacks to “The Answer” from Pearl and Rose’s perspective, and how Garnet’s existence influenced what Rose was fighting for.

“Now We’re Only Falling Apart” may not be enough to assuage the concerns of fans regarding the implications from the reveal in “A Single Pale Rose,” but it does at least help me feel a little better about seeing Pearl interacting with Pink Diamond. I don’t know what the show’s endgame will be regarding the whole thing about Rose and Pearl, but the crew has been carefully crafting this story since the beginning and I’m sure we’ve only begun to scratch the surface of what’s really going on. I just hope the show will recognize and address the fact that Rose kept Pearl enslaved.