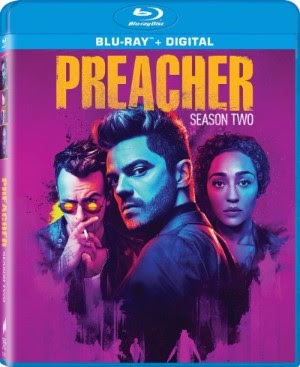 Fans of Preacher can go ahead and binge-watch the entire second season when it comes out in two months. Preacher Season Two will be available on Blu-ray and DVD on November 14, 2017.

Here’s the official synopsis for the second season!

The second season of PREACHER is a genre-bending thrill ride that follows West Texas preacher Jesse Custer (Dominic Cooper), his badass ex-girlfriend Tulip (Academy Award® nominee Ruth Negga, Best Actress, Loving, 2016) and Irish vampire Cassidy (Joseph Gilgun) as they embark on a road trip to find God and are thrust into a twisted battle spanning Heaven, Hell and everywhere in between.

Preacher revolves around Jesse Custer (played by Dominic Cooper, TV’s “Agent Carter,” Captain America: The First Avenger), a small-town preacher who has a criminal past. He sets out to find God upon learning He is absent from Heaven. Coming along for the ride are his ex-girlfriend Tulip (Best Actress Academy Award nominee Ruth Negga, “Loving,” “Agents of S.H.I.E.L.D.”) as well as his best mate Cassidy (Joseph Gilgun, “This is England,” TV’s “Emmerdale”), an Irish vampire, who identifies as pansexual.

Finding themselves in New Orleans, the main cast has to dodge local gangsters, secret agents and the Saint of Killers (Graham McTavish, TV’s “Outlander”), an unstoppable murderous cowboy from Hell.

Preacher is an AMC drama series which is based on Garth Ennis and Steve Dillon’s graphic novels. Sony Pictures Television co-produces the series. It was developed by Sam Catlin (TV’s “Breaking Bad”), Seth Rogen (“Superbad,” “This is the End,” “Neighbors”) along with Evan Goldberg (“Superbad,” “This is the End,” “Neighbors”) who also serve as executive producers along with James Weaver, Neal H. Moritz, Vivian Cannon, Ori Marmur, Jason Netter, Ken F. Levin, Garth Ennis, and Steve Dillon.

The Preacher Season Two Blu-ray and DVD sets include all 13 episodes. There’s also a gag reel and a “Raising the Stakes: Action on Set” featurette ”where the cast and crew explain why Season Two is filled with more action, blood and gore than ever before as we follow along on-set for one of the biggest fights of the season from the episode “Damsels.”

Are you a fan of Preacher? Are you excited for the Preacher Season Two Blu-ray and DVD release? Let us know.

Previous:Being ‘A World Apart’ with Author Mel Gough – Interview
Next: When Fandoms Inspire A Hobby – I Suddenly LOVE Ice Skating