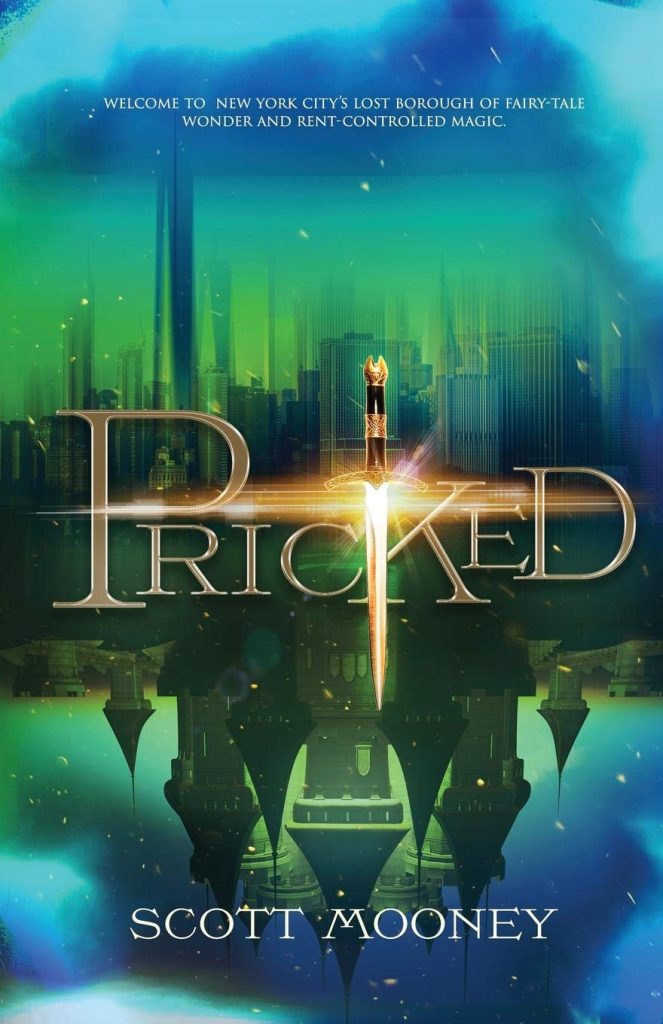 An urban fantasy set in both New York City and the Poisoned Apple, a between-the-worlds city full of magic and mayhem, Pricked by Scott Mooney is fun and witty but also falls victim to a few unfortunate tropes.

Pricked is the story of Briar Pryce, a twenty-something woman with the ability to affect people’s emotions via color-changing roses. Having fallen on hard times (like possibly being responsible for her best friend getting turned into a cat), she uses this ability to run “deliveries” for the elite of the Poisoned Apple, a bustling town straight out of a fairy tale that exists between spaces in New York City. One day, the head of the illustrious Grimmour family gives her a quest – find his daughter’s kidnapped boyfriend and he’ll pay for her best friend to be turned human again. Aided by a noble knight named Antoine, Briar runs all around both cities trying to find a kidnapped college student, only to discover that this simple mystery is not so simple.

For the most part, I really enjoyed Pricked. It’s clever and imaginative, with shades of Harry Potter and The Chronicles of Narnia. I love fantasy novels set in our world, especially those with secret entrances. It makes me think I can stumble across one if I just look hard enough. Briar’s ability is intriguing (and I appreciate the fact that she enchants people with roses) and I really want to know more – especially if it’s tied to the parents she’s never met. Mooney is pretty skilled at infusing humor into his writing; there were a lot of neat references and metaphors. And while this is a complete story – in that the mystery is solved by the end – there is also a perfect setup for the next book in the series.

Some readers had issues with the fact you seem to be dropped into the middle of a story. A lot of information about the Poisoned Apple and the world is given as you go, and events are referenced that happened prior to the start of the book, so I can understand feeling as though this is the second book in a series. But I feel like a lot of books can get bogged down in exposition when trying to establish the setting. I thought Mooney did a good job of world-building without getting too hung up on the details. The political system is still a bit murky, but I didn’t have much issue picturing the Poisoned Apple.

The unfortunate tropes I mentioned mostly have to do, sadly, with the female characters. Aside from Briar and to a lesser extent Miranda (the Royal whose boyfriend has been abducted), most of the female characters do not get much development. Briar’s two friends, Alice and Jacqui (the cat), are basically set decoration, even though Briar’s primary motivation for everything is curing Jacqui. It was disappointing that you don’t really get a sense of their friendship, considering everything. And aside from Alice and Jacqui, Briar seems to dislike every other woman she comes across, even going so far as to accost a confident college student and fill her with doubts for seemingly no reason other than, what, jealousy? Briar very much gives off an “I’m not like other girls” vibe, which is upsetting – mostly that this trope still exists in 2019. The ladies deserve better.

Despite its issues, Pricked is still a fun start to a series that, while far from perfect, shows a lot of promise. With everything left in the air after the main mystery is solved, I am actually quite excited to see where this story goes.

Pricked by Scott Mooney is published by Bleeding Ink Publishing and will be available August 13 wherever books are sold.

*I received an advance copy in exchange for an honest review. All opinions are my own.*