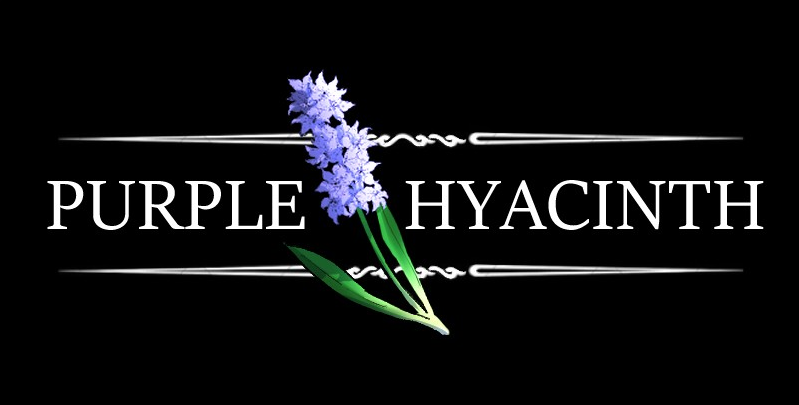 It’s Wednesday and we’re overdue for a webcomic recommendation! Today I’ve got something for people that like their comics a little darker, with some mystery, intrigue, and flirty-fighting. If that sounds like you, you should definitely check out Purple Hyacinth.

Purple Hyacinth, by the team of Ephemerys and Sophism, is the story of Lauren Sinclair, an officer with the Ardhalis Police Department. She has the uncanny ability to tell when someone is lying (which is represented in the comic by the text changing colors). When our story begins, she is still trying to deal with a traumatic event that happened ten years before – an explosion at the train station that killed someone close to her. Now, she and the rest of the police are stumbling after a criminal organization called the Phantom Scythe and a particularly deadly assassin known only by his calling card – a purple hyacinth. Lauren is the only person who has seen this assassin’s face and lived, and when they meet, he proposes an alliance in order to bring down the Phantom Scythe.

I’ve been following Purple Hyacinth almost from the beginning, and it just keeps getting better. The mystery is just getting started, and I’m very excited to see where the story takes us. What is the Phantom Scythe? What is their connection to the Allendale Station bombing? Are the crooked cops anyone that Lauren knows? I want to learn more about Lauren’s strange powers, and of course I’m dying to find out more about this mysterious assassin who hates the organization he works for enough to team with the police to bring it down.

I really like the art style. Many of the comics on Webtoon have a very manga style of artwork, of which I am a huge fan. I’m sure I’ve said this before, but I was a fan of this art style even before I got into anime and manga, which doesn’t make any sense but it’s the truth. The art in Purple Hyacinth is phenomenal. It’s very colorful and detailed, and the overall Victorian semi-steampunk look is just gorgeous. Honestly, even the murder scenes are beautiful; they contain some very artistic blood pools. 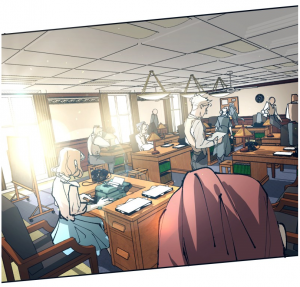 Purple Hyacinth is a comic that takes full advantage of the ability to add a soundtrack. Many of the chapters are accompanied by a suitably haunting score (composed by Sophism and Isabella LeVan) that helps add to the ambiance of a city that very much seems like Victorian London. It helps immerse you in the story and sets the mood quite well.

Perhaps the best thing about this comic, though, is the relationship between Lauren and Kieran. It’s just so delicious. Their banter is impressive, and their first joint interrogation of a suspect is hilarious, but their fighting is even better. Lauren’s interactions with the side characters – specifically her friends on the police force – are entertaining as well, but the core dynamic of this comic is the main pairing of Lauren and Kieran. There’s an undercurrent of tension in all of their scenes, and they’re obviously drawn together in ways that they don’t seem to understand just yet. My skin, it tingles.

There are only sixteen episodes so far, which means that you can easily binge it and get caught up before the next update.

Purple Hyacinth by Ephemerys and Sophism is hosted by Webtoon and updates on Sundays.

Previous:“Prey” Gets September Theatrical and VOD Release!
Next: Given 1×08 Review: “Time Is Running Out”