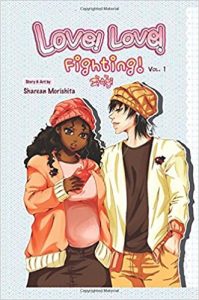 Love! Love! Fighting! by Sharean Morishita shares Oriana’s story of self-love and acceptance. This webtoon manga confronts issues of body image, colorism, and anti-blackness in South Korea, but the heart of the story revolves around Oriana reclaiming her life and agency.

In Sharean Morishita’s webtoon manga, Oriana travels to her home country of South Korea after losing her job in the States. Then she finds out that her cousin Krisha has tricked her into moving there to star in a fake couple reality show. Now Oriana has to deal with these new stresses and challenges as she navigates cultural and language barriers with her relatives and Jae-Hwa, the sullen man she’s in the reality show with.

Love! Love! Fighting!, a Rom-Com, was released in 2014; however, it stands out for its themes and unforgettable characters. Anti-blackness and colorism remain rampant in the States and overseas, and the manga does not shy away from these issues. Oriana is mixed race (Black and Korean) and plus-sized. She gets fired from her job in America after being sexually harassed. In South Korea, she is denigrated and invalidated. She’s not “Korean enough.” Her skin is too dark, her hair isn’t straight, she isn’t thin, and she’s not as fluent in Korean. Her cousin, light-skinned and fluent in Korean, receives praises for her accent and appearance. Krisha has the same hair as Oriana’s, but her lighter skin and slender frame are seen as desirable. 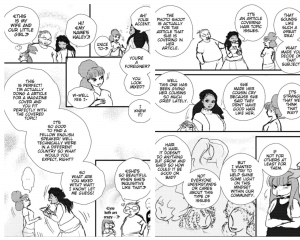 (Note: the webtoon manga panels read from left to right)

Oriana’s experiences with antiblackness is just one story among other dark-skinned mixed-race people (Blasian) in Asia. In the States, Latin America, Africa, and elsewhere, the media favors whiteness. People with dark skin tones are judged as undesirable and mostly relegated to tragic narratives and servitude roles. There have been instances of Blackface and appropriation of Black culture in East Asian media (K-Pop, K/C/J-Dramas, anime, etc.). Morishita excels in showing the trauma induced by the colorism and anti-blackness during Oriana and Krisha’s childhood. Where Krisha benefits from the privilege and effortless acceptance among her Korean friends, Oriana has to assert her humanity in a space where her blackness is disrespected, her body is rejected, and her identity is invalidated.

The language barrier between Oriana and Jae-Hwa paves a way for them to understand each other beyond words. The two are complicated and dynamic characters, and the story provides enough time for their relationship to develop. Oriana deals with grieving for her late mother and grandmother as well, which complicates her relationship with her Korean relatives. She regularly texts her father who lives in America, but he remains absent and emotionally unavailable. She’s aware of her self-worth, but she also feels unlovable because of her racial identity and body type. The storyline ultimately leads to her being true to herself and moving on with love. 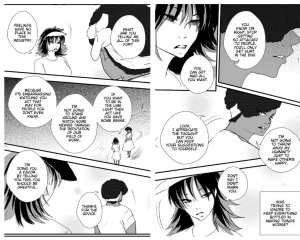 Love! Love! Fighting! features a memorable cast of characters and a story centering on a Black woman’s agency and her reclaiming her space and identity.

Love! Love! Fighting! is available on the author’s site, Tapas, and to buy on Amazon. A revamped version (in color), Catch Me! Fight Me! Love Me!, is available on WebToon.

For more great webcomic recommendations, check out our Wednesday Webcomics archives! You can also find more about Black creators and their works at The Geekiary here.