You’re Killing Me, Smalls! Check Out “The Sandlot” Collector Edition 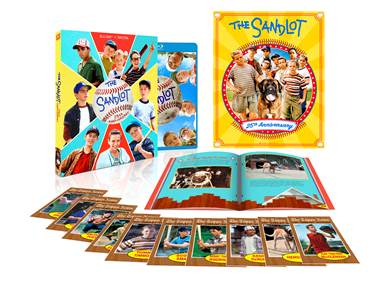 As if I needed another reminder that I’m getting old, The Sandlot turns 25 this year. In celebration of a film that is a staple part of a lot of older millennials’ childhoods, Twentieth Century Fox Home Entertainment is releasing The Sandlot 25th Anniversary Collector Edition on Blu-ray and DVD this March!

In this beloved family-favorite, it’s the early 1960s and fifth-grader Scotty Smalls (Tom Guiry) has just moved into town with his folks (Karen Allen and Denis Leary). Kids call him a dork — he can’t even throw a baseball! But that changes when the leader of the neighborhood gang recruits him to play on the nearby sandlot field. It’s the beginning of a magical summer of baseball, wild adventures, first kisses and fearsome confrontations with the dreaded beast and its owner (James Earl Jones) who live behind the left field fence. Soon nine boys have become best friends, Scotty is part of a team, and their leader has become a local legend in this hilarious and warmhearted comedy.

Relive the nostalgia of the early ’90s reliving the nostalgia of the early ’60s with The Sandlot 25th Anniversary Collector Edition. Watch their many attempts to retrieve the baseball from the Beast in widescreen 2.35:1. Quote along with Ham’s insult battle with the Little Leaguers in English DTS-HD Master Audio 5.1. Think of how amazing the night game sequence will be on Blu-ray!

As with many Blu-ray releases of older films, it’s sadly lacking on the special features, only including the trailer, some TV spots, and something just called “featurette”. But you’re getting more than the Blu-ray with this collector’s edition. The Sandlot 25th Anniversary Collector Edition comes with a set of 10 custom Topps baseball cards featuring Smalls, Benny, Squints, and the rest of the Sandlot gang, which was created exclusively for the collector’s edition release. It also comes with a brand new booklet full of behind-the-scenes photos from the director’s personal archive and full-color poster!

This movie, you guys. This movie. This movie was my jam when I was a kid. I could probably recite it from memory right now. I am so excited about this release that I don’t even know what to do with myself, but I can’t wait to tell my sisters.

The Sandlot 25th Anniversary Collector Edition arrives on Blu-ray on March 27. Be there, buffalo butt breath.