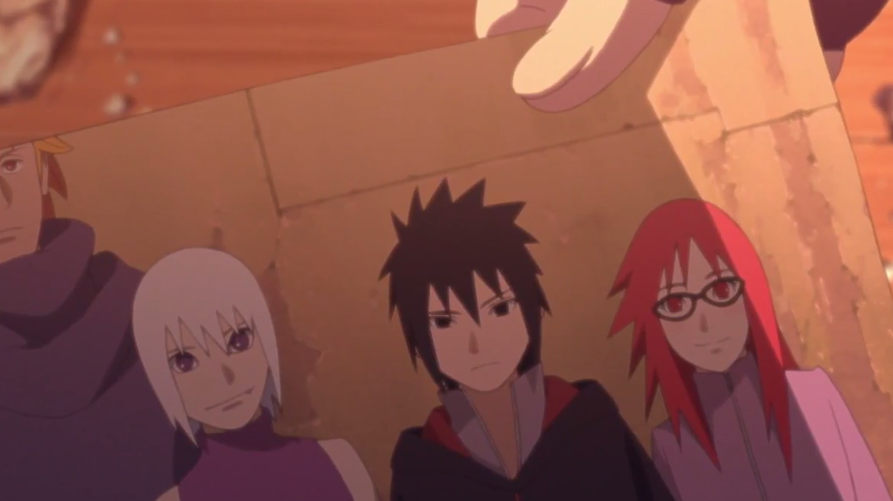 This week’s episode of Boruto: Naruto Next Generations started the Naruto Gaiden arc. ‘Sarada Uchiha’ was all about our young female hero trying to find her true parentage.

I’ve been waiting for the Naruto Gaiden arc to begin ever since the premiere of the anime. ‘Sarada Uchiha’ also had some new scenes that offered a bit more content to fans who’ve read the mini-manga series. The episode showed the emptiness Salad felt in her heart due to Sasuke not being around.

The episode had scenes where Salad’s classmates were being trained by their fathers. Even Boruto played a prank to get Naruto to indulge in a game with him. However, Salad can’t remember ever seeing her father, Sasuke.

Salad does have Sakura, but her pink-haired mother isn’t good at answering Salad’s questions about Sasuke. I get that Sakura can’t tell Salad much about Sasuke’s secret mission, but she should at least tell her something. Also, how hard can it be for Sasuke to send a message to his daughter once in a while?

The episode further intensified Salad’s doubts regarding her true parentage when she found an old picture of Sasuke standing next to Karin. I remember how the mini-manga series caused the fandom to go into a frenzy. There were fans calling into question Sasuke’s loyalty and whether or not Salad was actually Sakura’s daughter.

Coming to the extra scenes in the episode, I liked how Salad decided to visit the local library to research the Uchiha lineage. It was also a way for the anime to explain the Sharingan to viewers who didn’t grow up watching and reading Naruto.

Also, the scene where Sakura ran to Salad because our young heroine complained about blurry eyes was sweet. Sakura may not be the kind of mother that Salad wants right now, but she’s doing the best she can for her daughter. It’s not easy being Sasuke’s wife, a powerful ninja who has a lot of emotional baggage to deal with.

Chocho brought some comedic relief in ‘Sarada Uchiha’ and having read the manga I know she’s going to continue being awesome.

Did you watch ‘Sarada Uchiha’ this week? What did you think? Let us know.

Previous:“Fusion for Beginners and Experts” Dancing to Bookshelves in December
Next: Daniel Sharman and Bradley James Join Medici Season 2