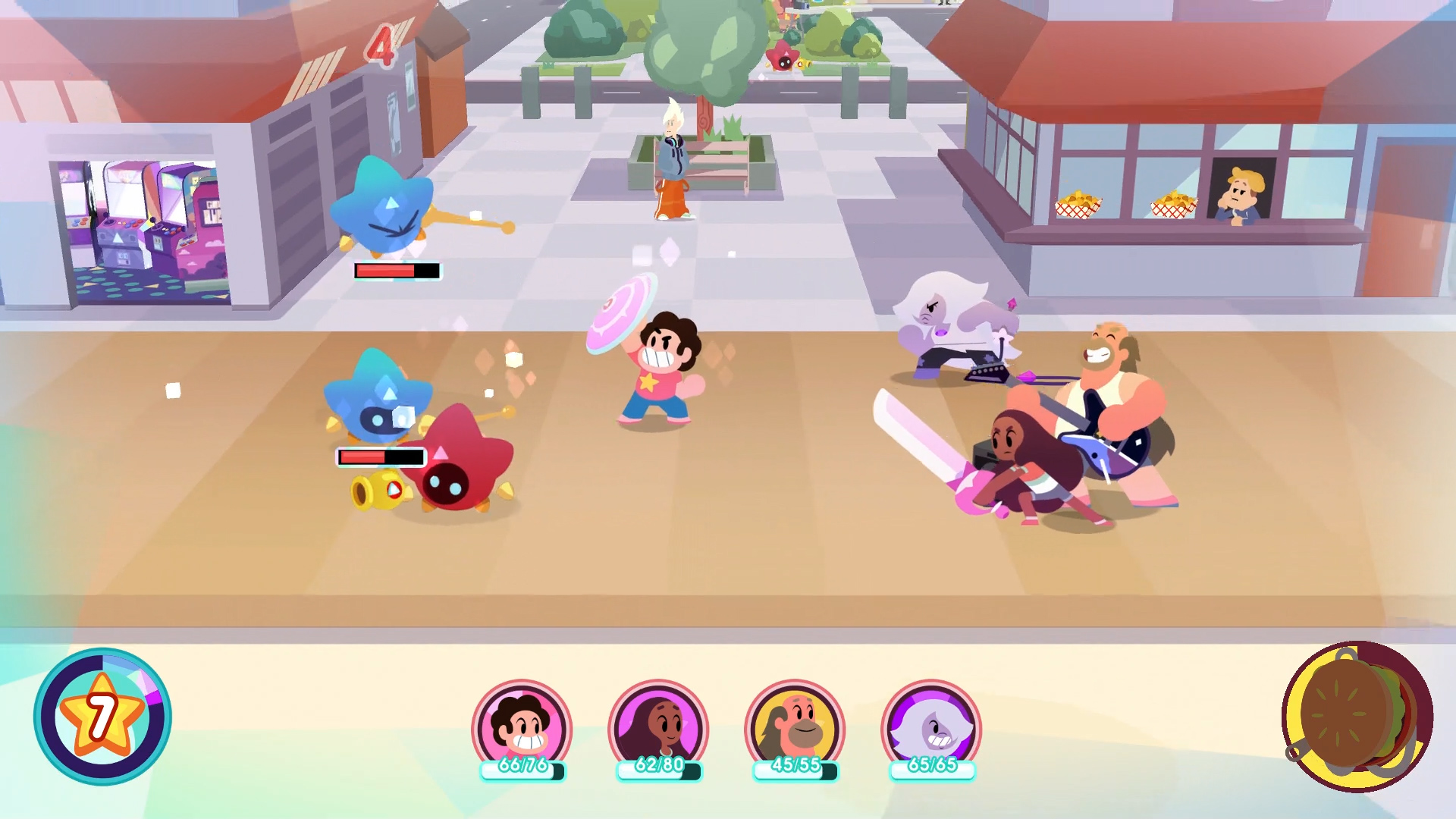 Steven Universe: Save the Light is here to win the fight and then go out for pizzas!

Save the Light is a sequel to Attack the Light, Grumpyface Studios’ first SU offering. Like all their games until now, it was an app, and in every way smaller than Save the Light. That’s not a criticism– most of my gaming is spent on small screens and I loved ATL. The time it took to finish and its overall simplicity made it great to replay. But Save the Light has more characters (playable and NPC), more items, more moves, more quests, more everything. 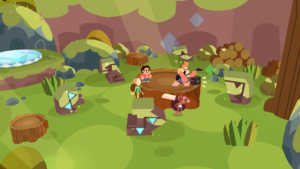 The plot of Save the Light picks up not long after the first game leaves off. Steven and his prism pal are goofing around when an ominous Homeworld spaceship arrives in Beach City and smashes up Greg’s car wash. The ship belongs to Hessonite, the fabulous main villain of the game. She claims she is the owner of the light prism, and forces it back into her service. She also has been on Earth before, as a part of Homeworld’s army during Rose’s Rebellion. “Did you miss me?” she asks the planet, chuckling low, which means it’s all but confirmed she is the same commander that Centipeetle drew in “Monster Reunion.” I love Hessonite very, very much and I hope to see her in all her evil sparkling glory on the show some day.

Video game adaptations of television and movies can be hit-or-miss, nonsensical non-canonical cash grabs or worse. But right from the Save the Light loading screen, we see a Steven Universe title card stating “written and developed by Rebecca Sugar and Grumpyface.” With the Queen Sucrose seal of approval, it’s no wonder that everything in the Save the Light-verse feels like it could belong in the show itself. Here is a link to a rough list of characters who are present in some way in the game, each in the Grumpyface “far away” simplified character design style. All of them have lines (except those who canonically don’t talk– lookin’ at you, Suitcase Sam), and while the only spoken aloud lines are done by the main voice cast, all dialogue and mannerisms are on point and wonderful. 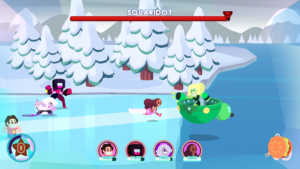 After the Save the Light expository opening sequence narrated by Zach Callison, you are dropped into Steven’s house alongside Connie. It’s a small set piece but I explored every nook and cranny, so excited to be in Steven’s house. But then, but then– I left the house. “I’M IN BEACH CITY!!!” I thought, definitely crying a little. It is a truly magical experience as a fan of Steven Universe to be able to run around Beach City in three dimensions, getting quests from townies and fortunes from Boltron (who isn’t just Future Boy Zoltron with a “B” pasted over the first letter, why would you say that?). You can deliver pizzas for Kiki, buy items at the Big Donut, visit Vidalia and get her to paint something for you– it’s like all the best boardie episodes of Steven Universe rolled into one.

Connie and Greg join the party first, and then you choose between one of the three main Crystal Gems to join up next. Eventually all of them and Peridot join the team, but this choice is the first of many small ones that make Save the Light that much more engaging. For example, you are given a choice of four names for some of the big boss battles– I chose Dave for the first one– and other characters react to that choice and incorporate it into the game. 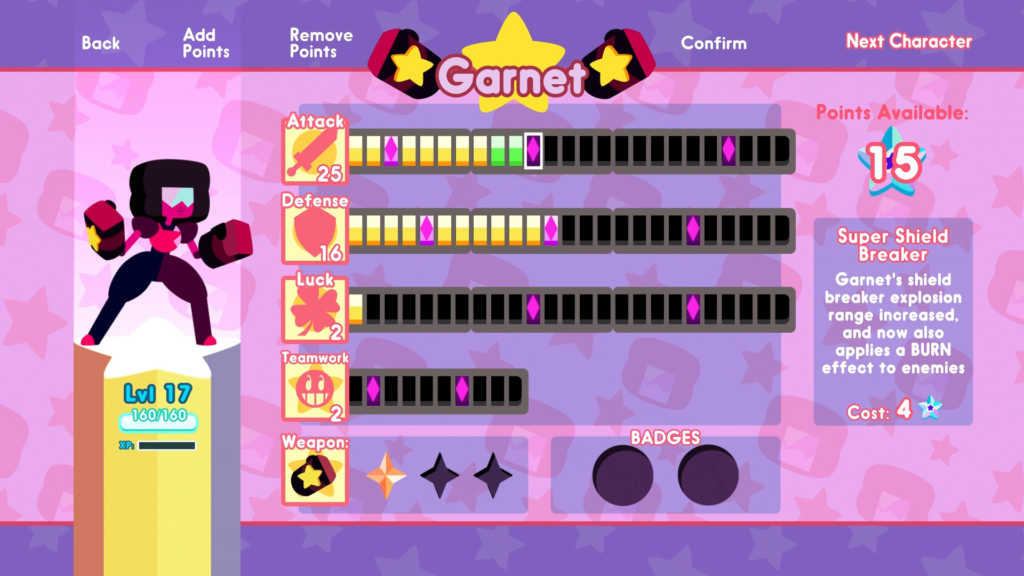 Steven is always on the team, but the other three slots are up to you, to be rotated whenever you reach a warp pad. Like Attack the Light, each character has unique moves and abilities, which you can emphasize with points whenever they level up. Besides Attack, Defense, and Luck, which all featured in ATL, there is now a “teamwork” meter. Every single pairing between playable characters has a special move when their relationship bar reaches full while in battle, brought on by encouragement and teamwork. If a fusion has been introduced canonically, that’s the special move, and they all have their own specific abilities which are very, very awesome. Stevonnie is an offense/defense dynamo, Sugilite stuns enemies by pounding on the ground, Opal rains arrows, Smoky Quartz has a rad yo-yo fan move, Sardonyx has a prize wheel filled with treats and tricks. As fantastic and powerful as the fusions are, the special moves that are not fusions are almost more fun. Really, Steven Universe is at its core a show about relationships, and Save the Light’s emphasis on all of them is wonderful and perfect. 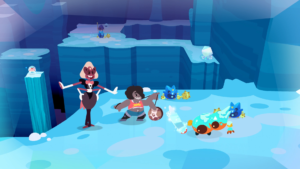 Even besides the two-character special moves, teamwork is absolutely essential in Save the Light. Greg jams out, healing and buffing the team or attacking enemies, but if he is interrupted, the jam stops. Connie has a move to post up and protect another player, and Steven can bubble himself or others. One of Amethyst’s base moves is shapeshifting into Steven and boosting the defense of a teammate, with Michaela Dietz-voiced lines like “Steven catchphrase!” Garnet is a true tank, with a move called “Taunt” in which she forces enemies to target her for a short time. Even if you have a personal dream team, it’s smart to rotate through all characters to ensure they all level up at a similar rate. Plus, they all have non-battle moves which are essential for progressing through the Save the Light world, so you have to use every character at one point or another.

Many of the moves that Garnet, Steven, Pearl, and Amethyst have in Save the Light are the same as they were in the original, which is great. The badge system is also intact, as well as most of the items from ATL. But the Cheeseburger Backpack inventory is augmented, and not just with Fry Bits and Big Donuts and other new items. There are now two additional areas of the backpack. Items (Battle Stuff) is the lettuce, Questy Things is the cheese, and Chroma! is the tomato. This level of loving detail, including naming each section as Steven himself would, is another example of how much thought Grumpyface put into every facet of Save the Light. It is never a question that the people who made this game are true fans of the show. 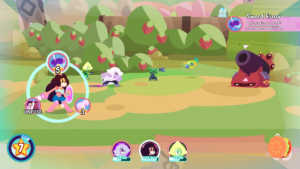 The turn-based fighting of Attack the Light is preserved, but slightly altered. Each move a character makes costs a different amount of star power depending on its potency. Unlike in ATL, light construct enemies can attack even when the star gauge is still full (each move costs a different amount of stars depending on its potency). Instead of always having the Crystal Gems on one side and enemies on the other, the layout is different for every battle. This matters because certain moves have area effects, and the Crystal Gem or light construct team can be pushed around, moving their positions, disrupting charged attacks/effects– even knocking characters completely off an edge of the battleground!

I think the mark of many a great video game is when you find yourself shouting “I hate this!” at the screen at various points. Boy, did I yell that a lot when I kept getting knocked into ice-water, slowing the rate at which my star gauge refilled and sapping my characters of hit points. Save the Light is way more challenging than its predecessor and that is marvelous for the expanded gameplay.

Battling light constructs is of course a big part of Save the Light, but discovering the mysteries of the gorgeously designed world is equally important. There are secrets and puzzles and mini-games, and a regenerative source of items dotted around the landscape you can find and/or purchase from Onion. Also, I really appreciate that you can usually manage not to battle the constructs; you just have to dodge their initial attacks until they lose interest. 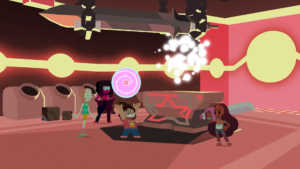 Like in Attack the Light, the stages are interdependent, so you might need something in the third stage before you can open a door in the first. Each stage is a recognizable piece of the Steven Universe world. These include Beach City, the woods from “Onion Gang,” the snowy landscape of “Gem Hunt,” and one very special stage where you can augment weapons based on special items (“chromas” and “schematics”) you find throughout the game. Let’s just say that area is serious bismuth.

I do have criticisms of Save the Light. Shifting between characters can be confusing and frustrating, especially during battle. I burned a hole in my palm trying to get Sugilite’s punching meter all the way full and I was never able to get there. Pearl’s aiming moves are hard to control. Smoky Quartz is referred to with “she/her” pronouns, which I assume is a simple mistake, since Stevonnie is referred to properly as “they/them.” Jumping from floating platform to floating platform was really difficult if they weren’t in a straight line. After the first time the game froze and forced me to quit to get back in, it started happening more and more frequently until I had to restart my whole PS4. And frankly, it is unrealistic that Pearl would EVER let Steven out in the snow in a t-shirt and flip flops! 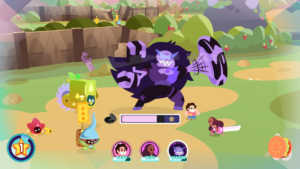 There are going to be a lot of sad Lapis fans upset that she isn’t a playable character. She might too OP, or perhaps they’re saving her for DLC, or maybe working out the logistics of a water-based attacker in stages with no water was too tricky. Save the Light acknowledges this whole scenario, with Steven telling Lapis a lot of people would be excited to see her join in on the adventure. Really, the whole game is delightfully meta in multiple ways. Characters are constantly making comments about how the adventure they are on is just like an RPG. Before you can play her directly, Peridot calls Steven to rage about the video game that he lent her (surprise, an RPG), but Steven soothes the angry little slice of pie, telling her sometimes you just have to level up to move forward. After that exchange, I found myself in a battle where I was way over my head, and realization hit me that the game was warning me I needed to get beefier to move on. Like Attack the Light, there are items to revive a fallen teammate, but be careful, because the Cheeseburger Backpack is not accessible when Steven is the one knocked out!

In no particular order, here are some more things that delighted me about Save the Light:

Grumpyface Studios has outdone themselves with their first console offering. I can’t comment on how Save the Light measures up as Paper Mario’s unofficial successor since I never played the latter, but I enjoyed myself from start to finish and I can definitely see folks who have never watched Steven Universe doing the same. Save the Light might not be a new episode, but it’s challenging, fun, beautiful, and an all-around fantastic addition to SU canon. 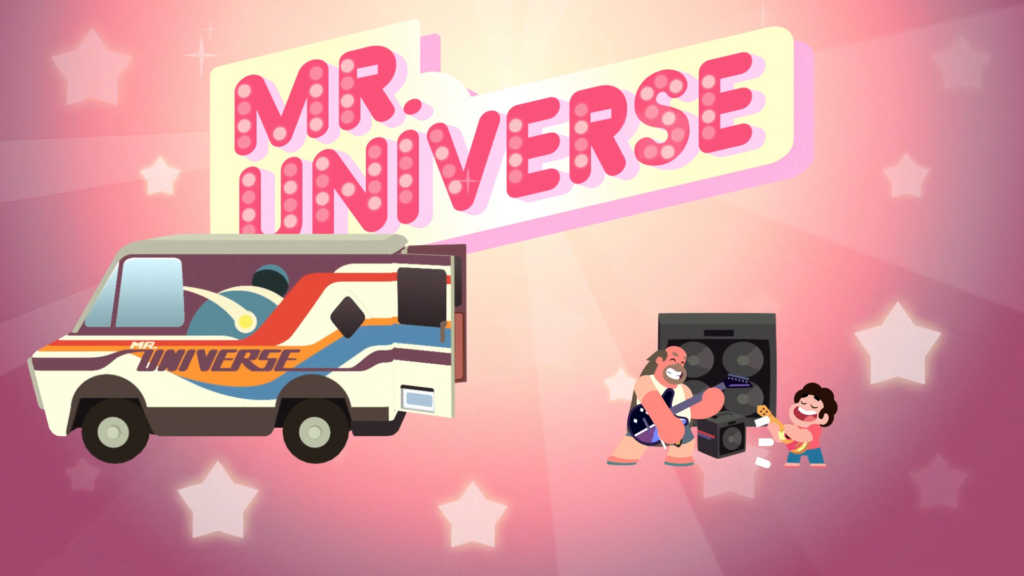 I received a code for Save the Light from Cartoon Network for coverage purposes. All opinions are my own.

Previous:The Walking Dead 8×02 Review: The Damned
Next: Stranger Things 2: You Can’t Tell Me This Wasn’t a Perfect Follow-Up