Stranger Things 2: You Can’t Tell Me This Wasn’t a Perfect Follow-Up

How can one write a review for Stranger Things 2? No really, I’m asking because I have no idea how to force all of my feelings into coherent thoughts.

I tried skimming some other reviews, but personally I don’t care for others’ opinions impacting my own, and I was seeing a lot of comments like “Stranger Things 2 is great, but it doesn’t live up to season one”. And you know what? I don’t think that’s fair. They were two very different experiences, and while I haven’t rewatched the first season since earlier this year, I have to say that I enjoyed them equally.

Yes, some of it was ‘same old, same old’, but in the best way possible – for instance, Joyce Byers is still the bomb ass mother who is also *way* too overprotective. Steve Harrington picked up where he left off last season, but he continued to grow as a character and therefore grew on me even more (I seriously didn’t think that was possible). He is a precious peach and you will never be able to tell me otherwise; in fact, his mentoring of Dustin was one of the high points of this season. Meanwhile, Stranger Things 2 gave Lucas a far better story line, while it took away from Dustin’s…but hey, all’s fair in love and war, and this series definitely features a bit of both. 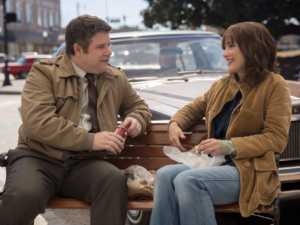 Speaking of love, WOW. Who didn’t love Bob Newby? (And also love the fact that his last name was ‘Newby’…because he’s a newb to the eldritch horrors most of these characters barely survived in Season 1…get it?) Sean Astin has to have wormed his way into our pop culture hearts throughout his *entire* life, between Goonies for the 80s geeks, Rudy for the sports fans, LOTR for the Tolkien nerds, and 50 First Dates for those who love romantic comedies. I was stoked when I found out that he would be part of Stranger Things 2, and they didn’t disappoint – while I had my concerns in the first few episodes, as the season wore on it became clear that he was pretty much one of the Best Good Guys. And yet he got the worst, most gratuitous death scene – yes, it was even worse than Mews the cat, and that was bad.

Seriously, I feel like with Mews we got a bit more of a warning…we knew that Dart was bad news, we knew that Mews was missing right before Dustin ‘found’ him, and while I absolutely couldn’t watch that scene – and while it was definitely longer than it needed to be – at least we didn’t get a one-two like we did with Bob. I mean, he almost survived…and then he didn’t…and then they panned back to him getting eaten *after he was dead*. I get that this isn’t a happy-go-lucky show, but was showing any of this – Mews or Bob getting eaten – really *necessary*? Hell no. And yeah, Dart was a demo-dog and needed to go and Dustin wasn’t very smart about him, but that additional shot of him dying with the 3 Musketeers wrapper right next to him was just another shudder-inducing moment. 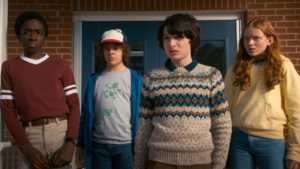 And speaking of shudder-inducing…sorry not sorry, as much as I wanted to like Max, I just ended up feeling generally ‘meh’ about her. My takeaway is that she’s a tomboy who is good at skateboarding and video games and was inserted to cause conflict between Dustin and Lucas…I have to hope that in season three she will be more of a character and less of a plot vehicle. I believe they meant her to introduce new dynamics into the group, but I’m not sure they *succeeded* in doing so. It didn’t help that even her backstory was pretty bland – it was built up quite a bit, what with the abusive step brother who was also a foil to Steve – but as much as I was disgusted by Billy, clearly his dad treats him like shit, so in the end the way he treats Max is just a phoned-in example of the cycle of abuse.

Side note: I have to apologize to the actor who plays Billy because I can’t stand looking at him. Not even because his character is a jerk; he just looks too much like Jared Leto. (Please tell me I’m not the only one who saw this?)

With those complaints out of the way, there really was SO much to love in Stranger Things 2. The music – both the actual 80s tunes and the return of the series’ spooky Tron-style background music – was basically perfect. And while I wish that they’d reunited Mike and El a lot sooner, I also know that the plot worked better with their late reunion. It was about time that El – or should I call her Jane? – learned more about herself and also had a chance to make some real decisions. I’m really glad that they took what she learned from Kali/’Eight’ in “The Lost Sister” and had her use it to close the gate in the season finale, because while I absolutely loved their reunion, I felt like that episode probably could have been removed from the roster with minimal changes made. 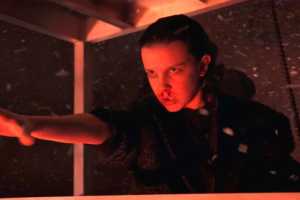 Don’t get me wrong – it was an amazing episode! (Also I LOVE LOVE LOVE that they added some diversity this season, though I’m still not sure they did the best job of it? Righteous or not, they were all still criminals… :-/ ) There was just something that felt off about it; it could have been the timing, or the fact that the entire episode took place outside of Hawkins when there was so much going on there. But I stand by the fact that if El hadn’t been able to focus that anger that Kali talked about to close the gate, “The Lost Sister” wouldn’t have been a completely necessary addition to Stranger Things 2.

Now, I’ve heard that the Duffer Brothers don’t want Stranger Things to be one season after another of bigger and better monsters, which I love. That said, I think that Stranger Things 2 did an awesome job of introducing more/bigger monsters (the herd of demo-dogs and of course the Mind Flayer itself) while also showing us that there’s more going on – we’ve met Eleven and Eight, but what about all of the other kids involved in that program? Where are they, and what are their powers? There’s so much to look forward to in season three, am I right?

And hey, hopefully for the first time ever, Will won’t be awful in season three. And we also got some Barb closure! (Sorry, Barb fanatics…but also perhaps they made the deaths so explicit this season because of the ambiguity of Barb’s demise in season one.) 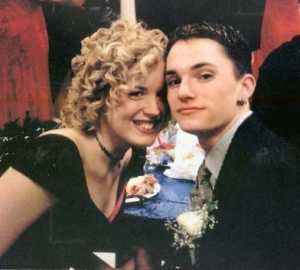 Some final thoughts:
– Eleven’s ghost costume bit was absolutely hilarious and no one will ever be able to tell me otherwise.
– I’m maybe too happy that Dr. Owens is alive, and REALLY WITH THE JANE HOPPER BIRTH CERTIFICATE ::dies::
– Why is Hopper always on a diet? (The answer I received upon asking this was that ‘every time he’s late arriving home he has to eat an 8000 calorie triple-decker Eggo Extravaganza; I suppose that makes sense.)
– Did anyone else have a ‘Snow Ball’ at their school? I did! Ah, memories!
– Thank god the science teacher / AV Club sponsor is still alive. He seems like one of truly good people those that this show would chew up and spit out (LIKE BOB) so I will celebrate his life for as long as it lives.

Listen, I love, love, LOVE, the first season of Stranger Things. These days it seems unavoidable that shows have some sort of sophomore slump, but this one didn’t. Stranger Things 2 is the best second season of a show that I’ve seen in a long time, and I can’t wait for more.

What did you think of Stranger Things 2? Let us know in the comments!