Sleepy Hollow is proving itself to be the show that just keeps on giving.  This week’s episode was arguably the strongest of the season so far, crammed-packed full with so much character and plot development, humor, and general badassery that it was difficult to distil into a single review.

After last week’s tear-jerker of a plot, this week was mercifully funny.  I continue to be impressed with how well the writers play the humor of Ichabod’s difficulties with the 21st century.  The gag could get old very quickly, especially if Ichabod were made out to be a fool each time, but they seem to strike a perfect balance between humor and competency.  He does not take quickly to the computer because he has absolutely no basis for understanding something so complicated, but he adapts more easily to the phone because it is simpler to use.  Ichabod is also shown to be extremely competent in other areas, such as 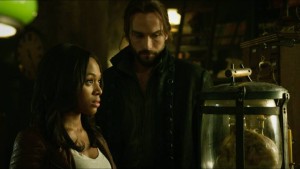 cyphers and foreign languages.  Juxtaposing his proficiencies with his deficiencies allows the humor to stem from the situation rather than by laughing at Ichabod himself.  Also of note this week was the sequence of Abbie and Ichabod trying to destroy the Horseman’s skull.  It felt like something out of a cartoon, but it worked.  Watching the two of them try to blow up the skull with dynamite was priceless!

Although I have thoroughly enjoyed the focus on Abbie and Ichabod, it was a relief to see other characters receive some much-needed attention.  One aspect that seems to set apart good shows from great shows is the strength of the supporting characters, and Sleepy Hollow is developing some very strong supporting characters – characters who are actually diverse in both gender and ethnicity.  It effectively trounces the Hollywood misconception that a show has to be saturated with cis-, white males to succeed.  Last week, it was all about the women.  This week, Irving, Luke, and Andy take the stage. 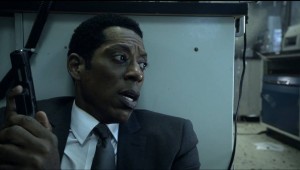 I was thrilled to see Irving finally step into the spotlight and take an active role in the story.  His competency was never in doubt, but now we know he can dodge axes and sling sass with the best of them.  It was a smart move to bring Irving fully into the loop before the end of the season because he is too perceptive to have believably maintained his – albeit skeptical – leniency with Abbie and Ichabod for much longer.  I know Abbie and Ichabod are the two witnesses, but I hope the three of them team up more frequently – perhaps hold more arts and crafts sessions in their secret base.

Luke Morales also becomes a player in this game when he is confronted by poor, dead Andy Brooks.  Until now, Luke had not been presented in the best light due to his jealousy and suspicion of Ichabod.  He would have been an easy target to set as the unlikeable, one-dimensional rival against Ichabod for Abbie’s affections, but this week saw the sweet, caring side of Luke that likely caught Abbie’s attention in the first place.  He is clearly is more concerned about repairing his relationship with Abbie than about competing with Ichabod, and I am eager to see how he reconciles this desire with the warning from Andy.

The episode should also be commended for its treatment of sexism and slavery, issues that many shows shy from.  Rather than Ichabod dismissing Abbie’s frustration at being excluded from the Freemason boys’ club, he listens to her and actually intends to correct the Freemason’s misogynistic rules.  I’ll admit – I had a bit of a moment here.  It would have been easy to dismiss their misogyny with a shrug and a sigh because their customs are rooted in “tradition.”  Instead, the exclusion of women was acknowledged as problematic and steps were taken to resolve it.  How many shows do you know that actually go that far?! 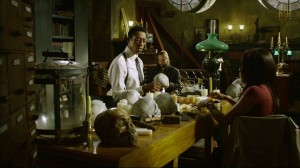 Even more notable was the statement about slavery.  The subject was mentioned in the pilot episode, with Ichabod’s surprise at Abbie’s “emancipation,” but most shows would not have acknowledged it again.  Instead, the writers recognised that, realistically, Abbie and Irving would have more to say to Ichabod on the matter, especially when Ichabod name-drops someone like Thomas Jefferson.  Jefferson, like many political figures, professed his opposition to slavery while owning a multitude of slaves and even having an affair with one.  When Irving and Abbie point out the obvious hypocrisy, Ichabod tries to defend Jefferson’s honor, but he is soundly defeated.  It was amazing to see such unsavoury truths about American history openly acknowledged and criticised on primetime television.

Part what endeared me to Sleepy Hollow was its cheesy, quirky charm, but it is beginning to prove that it can carry a weighty storyline without losing that spark.  It gains more and more momentum each week and shows no signs of slowing down.  If this episode is any indication, then we’d better buckle our seat belts because back half of the season is going to be one hell of a ride.