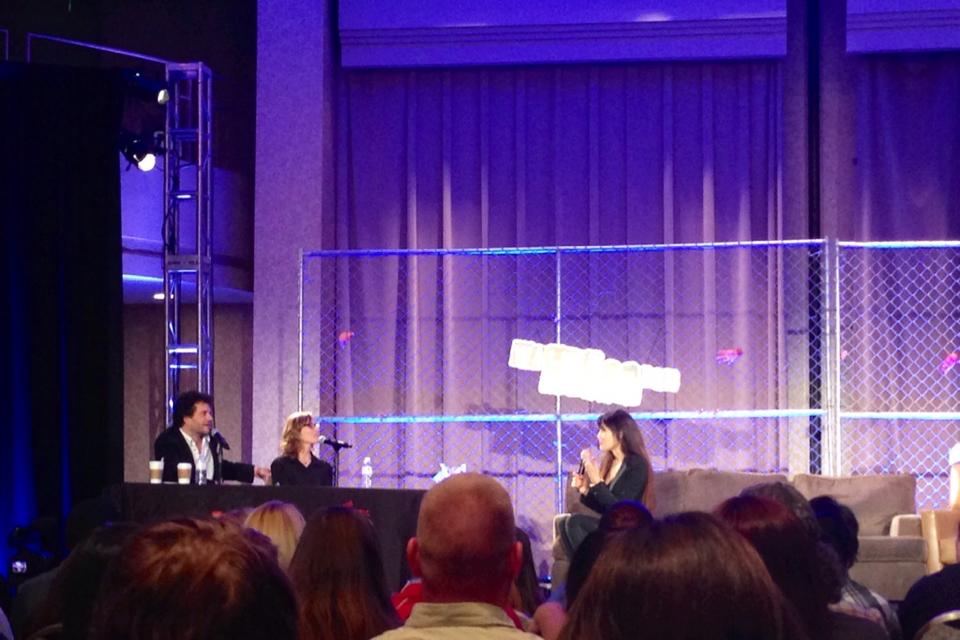 The panel schedule at Walker Stalker Con was packed, and I made time to attend as many as possible. Although the convention had great attendance, I loved that there wasn’t really a need to line up hours beforehand in order to get a seat – I was often able to walk right in and grab a place fairly close to the front of the room (except for the Andrew Lincoln panel, though, obviously, that wasn’t surprising).

I definitely had my favorites out of the ones I attended, and I thought it would be great to share some highlights of my ‘top three’ – the first one being Zombie Costuming with Eulyn Womble. This panel was a great mix of general discussion about Eulyn’s work on The Walking Dead and hints at how to get the zombie and survivor looks from the show.

When asked if she thought she would get tired of working on TWD, Ms. Womble insisted that, despite a lot of long days which often include early mornings and/or late nights, she wouldn’t tire of it “any time soon”. She said she is “constantly challenged…by every script”, it helps that the “different show runners give different aesthetics” for her to work with, and there are always new parts of the story for which she can’t wait to put together costumes. I’m sure it helps that she actually enjoys watching the show, as well – she said she watches it every Sunday as it airs and even ‘converses’ with her Twitter followers during the episodes.

In terms of advice on how viewers can put together their own Walking Dead style costumes, most of the focus was on how to create the zombie looks. Somewhat recently, the show has introduced ‘survivors-turned-zombie’ – those being people who, like Rick and Daryl and Carol and Michonne, were able to live for some time before dying and becoming zombies. This means their clothes are a lot more thrown together, patched up, and worn; often they’ll even be wearing bits and pieces of armor (usually homemade). Creating these zombie looks involves harsher tools than just the pumice stones that are used to age the humans’ clothes – often the zombie clothing takes a lot of wax, as well as knives with serrated edges. “We take pride in destroying [costume pieces],” Eulyn pointed out.

Although I only caught bits and pieces of Andrew Lincoln’s panel (due to having to be in a certain place at a certain time for his press roundtable), but what I did hear was just more proof that he truly enjoys being a part of this show, and really respects the fans. He talked about how excited he was to land the role of Rick Grimes. In fact, his brother is a fan of the comics and told Andrew that he better not mess things up! One of the things that was important from the beginning was, of course, Rick’s southern accent. Andrew began working with a dialect coach before they even started filming season one, and he explained that because the southern tone “dries you out”, he feels that unless he loses his voice after a day of filming, he “hasn’t done his job”.

As much as the audience encouraged Mr. Lincoln to talk about himself, he also made sure to mention other actors – and even other shows – several times throughout his panel. He spoke of his respect for shows like Breaking Bad and The Wire, as well as how much he appreciates the high standard of work ethic that he finds in fellow actors. Though I’m sure the audience was hoping for spoiler or two, the only thing he really said about Rick’s future – or rather, his future as Rick – is that we will soon see Rick develop a new technique for dispatching zombies, one that doesn’t include a knife or a gun. Which certainly gives us something to think about, as two new episodes have aired since Walker Stalker Con, and we have yet to see this ‘new technique’…

Finally, one of the last panels I attended was on Sunday afternoon, and it featured Melissa Ponzio (Karen) and Daniel Thomas May (Alan). Sadly, neither Melissa/Karen or Daniel/Alan is on TWD anymore, but that didn’t make this panel any less interesting. My favorite part was when both Melissa and Daniel talked about some scenes that they filmed that didn’t make it into the show. Daniel’s spoke of a ‘bridge’ scene that was supposed to occur after Ben’s death, in which he pulled Tyreese aside and railed about how the people in the prison were responsible for his son’s death. In fact, Daniel admitted, this scene didn’t even make it into the deleted scenes when season three was released on DVD/Blu-Ray! 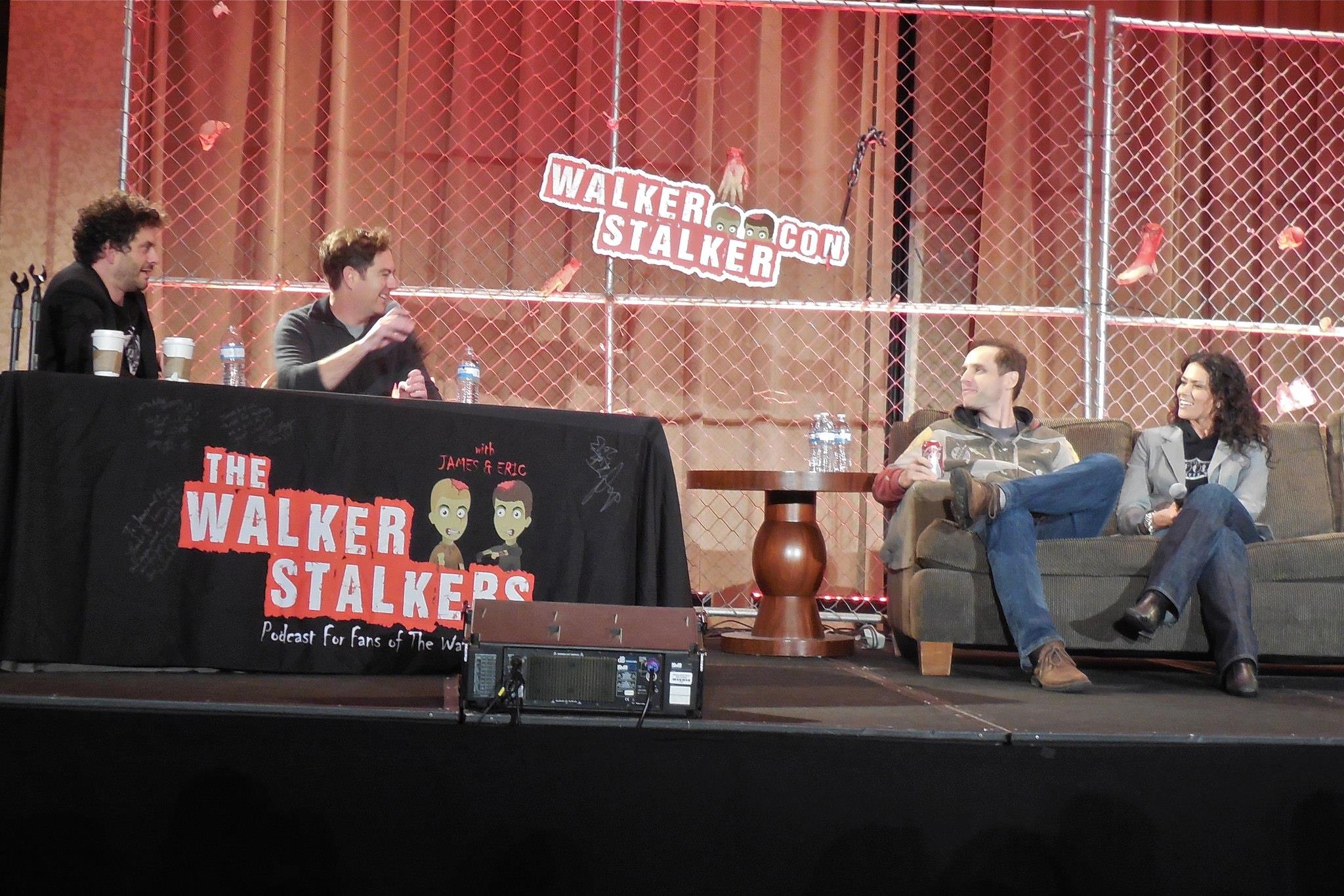 Being a big fan of the comics, Daniel Thomas May had been interested in being a part of The Walking Dead as soon as he heard that they were making it into a television show – and when he later found out that he would be playing a character who was at least loosely based on someone in the comics, it was quite exciting. When asked what he was excited to see in terms of the show’s future, he mentioned the soon-to-come introduction of Abraham (another character featured in the comics) – something that I actually hadn’t heard about, but was able to confirm via the show’s Wiki page.

For Melissa’s part, she said that The Walking Dead provided her with the “two biggest secrets of her life” – the first being that she was on the show at all, as she kept that quiet right up until she appeared last season; the second being that she died in 4×02. When she joined the show, she had to sign a lot of legal documents, including many regarding spoilers, but then, she didn’t know at the time that her character would end up being quite as important as she was. In fact, it was Laurie Holden (Andrea) who ‘named’ Karen. Laurie believed that Andrea would need a friend in Woodbury – a female friend, that is – and she chose Melissa/Karen.

The cut scene that Melissa specifically mentioned is one that would have been placed just after the attack in cell block D. It showed Karen moving out of her own cell and into Tyreese’s, which Melissa explained is “akin to being married in the apocalypse”. She also pointed out that Karen and Tyreese “were really committed” and that it was difficult to only have two episodes in which to showcase their relationship before her death.

Speaking of her death, though, Ms. Ponzio was adamant that she is okay with it. Karen’s death “was necessary for Tyreese’s character development”, she explained.

As you can see, all of the Walking Dead cast and crew members featured in these three panels went out of their way to express their appreciation for their experiences on the show. It would be impossible for me to have listened to them and not come away with a greater appreciation for all that goes into making The Walking Dead a reality, and I only wish I’d had time to attend every single panel offered at Walker Stalker Con.

But hey, there’s always next year!